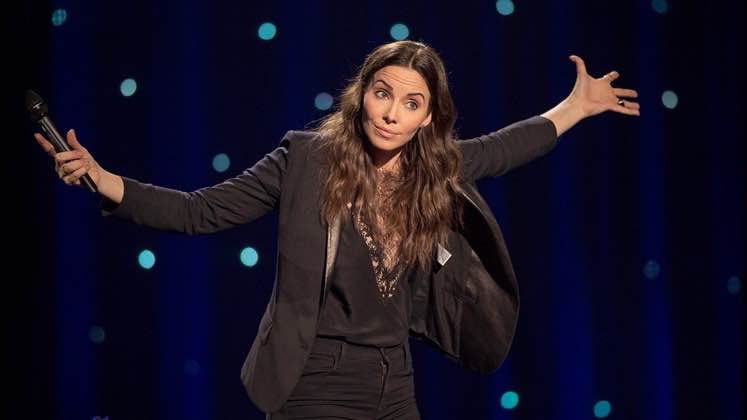 Whitney Cummings is originally from the Georgetown area of Washington, D.C. Her parents divorced when she was five, an event which she says has influenced her feelings about marriage and commitment, as well as her comedy.

Her interest in performing started early and she attended D.C.‘s Studio Theater, performing in “serious” works while a teen. She also worked as a runway and catalogue model.

After a brief flirtation with becoming a journalist, Cummings moved to Los Angeles and began to pursue stand up comedy. To improve as a comedian, Cummings would often perform at multiple Los Angeles comedy clubs in one night, working from 6pm to 2am several nights a week. Cummings believes that performing so often speeds up a goal of stand-up: discovering and being who you truly are on stage.

Whitney Cummings both performed on and produced the Showtime Comedy series “Live Nude Comedy!”, which featured both comedians and burlesque dancers - a return to an earlier tradition where comedians would perform in places such as strip clubs.

Whitney is a regular panelist on Chelsea Lately. She credits Chelsea Handler with doing a lot to advance female comedians and has appeared on the Comedians of Chelsea Lately stand-up special and tour.

In 2007, in conjunction with the Montreal Just For Laughs festival, Variety named her one of the “Top 10 Comics to Watch.” Further honors came in 2008, when Entertainment Weekly featured her as a “Comedy Star of Tomorrow” on their website.

After writing for The Comedy Central Roasts of Flavor Flav and Bob Saget, Cummings made her debut as a roaster in 2009 with the Roast of Joan Rivers.

In 2010, her first one-hour special “Money Shot” premiered, airing soon after her appearance on the Roast of David Hasselhoff. The special was filmed in her hometown of DC at Sidney Harmon Hall.

When she’s not performing on the road, she can often be seen at The Comedy Store in Los Angeles, which she considers her “home club.”