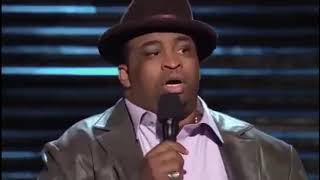 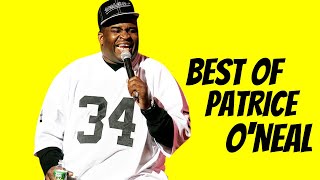 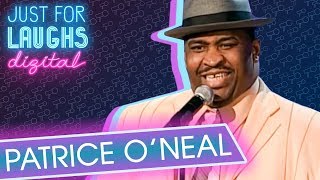 Patrice O'Neal - Men Can't Love You And Like You

Patrice got his first real taste of stand-up at a place called Estelle’s in Boston. He was heckling a comic, and the comic suggested maybe Patrice thought he could do better. Patrice did and the following week he went on stage at Estelle’s and brought down the house. From there he went on to work at the Comedy Connection, then moved to working at most of the clubs in and around Boston, New England, and New York. Now, years later, Patrice has a wide range of comic tools

In one bit, Patrice, at 6’5’’ and 300+ lbs., makes the audience hear and almost see the story of the eastern European gymnast quietly speaking of her difficult upbringing and training.

The Boston Globe said, “It is a hilarious piece made all the more so by the contradiction between Oneal’s very visible presence and that of the young white girl he is playing.”

Asked to whom he aspires, Patrice mentions only two names: George Carlin and Richard Pryor.

Carlin for his distinct point of view and universal appeal; Pryor for his honesty, vulnerability and Personal revelation. Patrice has appeared on “The Late Show with

Conan O’Brien” three times and was a regular on the very popular, Comedy Central’s “Tough Crowd with Colin Quinn”. He has also performed stand-up at both the prestigious Montreal Just For Laughs and the HBO U.S. Comedy Arts Festival in Aspen. Additionally Patrice has Guest Starred on numerous Television Shows including FOX’s critically acclaimed “Arrested Development” and NBC’s “The Office”. He was also a series regular on FOX’s drama, “The Jury”.

You can hear him voicing the animated shows “Shorties Watchin’ Shorties” on Comedy Central and “O’Grady High” on “Noggin”. Catch Patrice in the films “The 25th Hour” directed by Spike Lee, “In The Cut” with Meg Ryan and “Head Of State” with Chris Rock.

In early 2011, his first one hour special premiered on Comedy Central entitled “Elephant in the Room.” An extended and uncensored DVD cut followed soon after. Later than year, O’Neal made a impressive appearance on the Comedy Central Roast of Charlie Sheen, going off-the-cuff to comment on William Shatner and delivering a sincere statement of respect for Sheen.

A month after a debilitating stroke in October of 2011, Patrice O’Neal died. He was 41 years old.