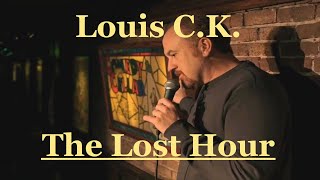 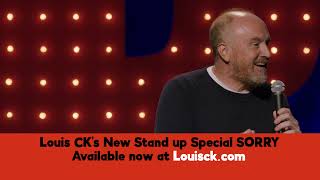 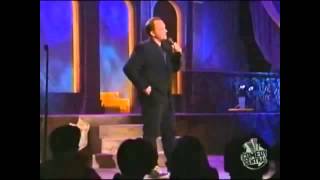 At six his parents moved back to his father’s country of Mexico. As a result, he learned Spanish as his first language.

Then, in 1984, he went on a stage for the first time. It was open mike night at a comedy club in Boston Massachusettes. Louis found that he had only enough “material” to stay on the stage for two minutes. It was a terrible experience. Louis did not try comedy again until two years later. After much struggling and humiliating failure, Louis became a part of the burgeoning Boston Stand- Up comedy scene.

In 1989, Louis moved to New york City. There were many, many (too many) comedy shows on television at the time and Louis appeared on all of them. He did Evening at the Improv, MTV Half Hour Comedy Hour, Comic Strip Live, Comedy on the Road and he even went on Star Search and lost to a fellow named Steve Mc’grew.

In 1990, Louis also made his first short film. It was called “Ceasar’s Salad”. It was pretty bad but it did Okay on the Festival circuit. The New Orleans Film and Video Festival gave it the “Best Comedy” award. The Chicago Film Festival gave it a Silver Plaque award.

Over the next few years, Louis was living in New York City, doing stand up comedy all over the country. He made another short film called “Ice Cream”. Ice Cream was very succesful. It was accepted to the Sundance Film Festival and the MOMA’s “New Films New Directors” series. It won the Grand Prize at Aspen Shortfest and has shown widely on television, in Europe, Australia, and it still shows frequently on BRAVO and IFC.

The next phase of Louis’ career was in Television comedy writing, something which has earned him Four Emmy Nominations and one EMMY AWARD WIN!

In 1993, The Conan O’brien Show hired Louis as a writer. He was a member of the original writing staff that launched the show, and worked there for about two years. He created many running bits on Conan’s show that are still in use there today such as “Actual Items” and “The Staring Contest”. Louis also made his network television debut as a stand up on Conan. He was the first stand up comedian to appear on Conan’s show!

In 1995, Louis made six Short Films for Showtime scetch comedy show “Sunny Skies”. The show was cancelled but the shorts live on. They play constantly on BRAVO and IFC. This was also the year that Louis appeared for the first time on Late Show with David Letterman, something that had been his life long dream. Dave liked Louis so much that he hired him as a writer. Louis worked on Late Show for 3 months until he became the Producer and Head Writer of the Dana Carvey Show on ABC. This show was a very irreverent scetch show on a family network and only lasted six weeks. Meanwhile, as far as Stand up, Louis appeared on Letterman and Conan several times over the next few years. He also appeared on the HBO Young Comedian’s Special in 1995.

In 1996, Louis made his own HBO Half Hour stand up comedy Special. And he got hired as a Producer and writer on the Chris Rock Show on HBO. That summer, Louis was given a development deal by Castle Rock and CBS, he and Spike Feresten (Seinfeld) co-wrote a sitcom entitled “Boomtown” which they read for Les Moonves, who did not decide that it was good.

In 1997, Louis made his first feature film. An independant Black and white film called “Tomorrow Night” Louis Wrote, directed and Produced this film with next to no money. Tomorrow Night was shown at the Sundance Film Festival, the South by Southwest fest, the Seatlle Film Fest, Hamptons, Goteborg and more. Dennis Harvey of Variety said of the film “It could be a cult Classic” The L.A. Times called it “A gem” and the New Times LA named “Tomorrow Night” The best film of the year 2000! Unfortunately, for all this critiacl acclaim, Tomorrow Night did not find distribution… yet.

In 1998, Louis went back to the Chris Rock show and was nominated for an Emmy award which he did not win… yet. He did many TV appearances as a stand up in this year too.

In 1999, Louis Won an Emmy for his work writing on the Chris Rock show. He also Created and starred in a show for comedy Central called “Louis C.K.‘s Filthy Stupid Talent Show”. Also, in 1999, he starred in a show syndicated on PBS called “Short Cuts” where he introduced Short films and showed people how to make their own. “Short Cuts” still shows on PBS today.

In 2000 Louis Directed and wrote his first studio movie, called “Pootie Tang” starring a character Louis created on the Chris Rock show. Chris Rock is also in Pootie Tang and Louis directed it for Paramount, at a very low budget, in New York City, over the Summer. “Pootie Tang” opened on very few screens across the country, made it’s money back and got some very good reviews in The New York Times, Daily news and many more. It is now on video where it has a rabid cult following. Louis also recieved his third Emmy nomination, also for the Chris Rock Show and was nominated in the same catagory for the Conan Obrien show. Louis also Co-wrote Chris Rock’s movie “Down to earth” which came out in Febuary of 2001, and made over 50 million in it’s first three weeks. What a year this was for Louis as he was selected for the “It List” in entertainment Weekly Magazine, and was selected by Variety as one of the “Ten Comics to Watch” in 2000.

In 2001, Louis was on the road much doing Stand Up comedy, getting out his first comedy CD “Louis C.K. Live in Houston” and launched his website www.louisck.com. He also produced a DVD of his nine short films, which now sell like hotcakes on his website. On March 16th Louis recorded his Half Hour Stand up Comedy Special for “Comedy Central Presents” at the Hudson Theater in New York. He also made his very first appearence on the Tonight Show on NBC .

In 2002, so far, Louis made his second appearence on the Tonight show. He went to the Aspen Comedy Festival and was named on the Ten comics to Watch list, this time by Hollywood Reporter. He also signed a development deal with Disney and sold two pilots, one to CBS and to Fox which was meant to star Louis himself. Neither of those shows made it to television but Louis got paid anyway.

In 2003 - 2004, Louis was a big hit at the Montreal Comedy Festival and the Aspen Comedy Festival and he signed with CBS and Warner Brothers to do another sitcom pilot. This one was called “Saint Louie”. Louis wrote it and produced it with Bruce Helford and Bruce Rasmussen, two veteran sitcom show runners. This pilot, unlike the others, was actually shot. It starred Louis, Cynthia Watros (Titus, Drew Carey) and Evan Handler (Sex in the City). “Saint Louie” did not make it onto the CBS fall schedual but it came out very funny and Louis is very proud of it.

This year, 2005, has been an incredible year for Louis. especially April. In that one month, he wrote, Executive Produced and starred in a sitcom pilot for HBO, shot his second HBO half hour standup special in New York, and his wife gave birth to his second daughter, all within two weeks of each other!

The standup special turned out great and will premiere on August 19th of 2005. The pilot was picked up by HBO for series and Louis is currently in production, writing, producing and starring in 12 episodes of the show which will begin airing in 2006. This show will mark HBO’s first multi-camera sitcom(in front of an audience) ever.

In 2011, C.K. won the Best Stand-Up Special award for “Hilarious” at the inaugural Comedy Awards. True to form, he thanked the voters, stating “this is the greatest moment of the shittiest night of my life.”