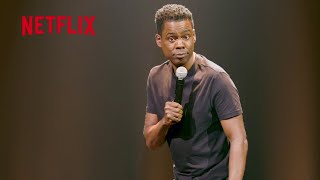 Two Rules To A Happy Relationship with Chris Rock | Tamborine 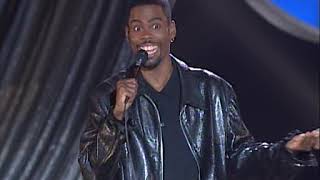 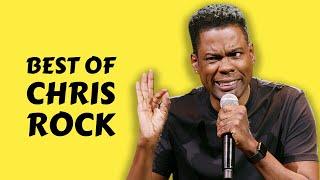 One of eight children and the oldest brother, Chris Rock grew up in New York’s Bed-Stuy neighborhood. Chris’ home was on one of the nice blocks in the ghetto.

Chris attended an all-white school to earn a better education, but the school was in a poor white neighborhood itself.

Only 17 when he first started performing in Manhattan. He and Colin Quinn would drive each other in from Brooklyn based on whoever had access to their parent’s car that night.

Early in his career, Eddie Murphy saw a young Chris at the Comic Strip and liked him so much, he create a part for him in his next film Beverly Hills Cop 2.

Chris was later cast in SNL. He stayed there for three seasons, but for some reason found it a difficult fit for his burgeoning talents. After he left SNL, he decided he was going to focus on stand-up,  a medium he could completely control and have the signature be all his. Prior to this time he was only doing one gig a month, enough to support himself. He went out on tour for months focusing on his writing and working road gigs - “like a fighter” as he described it. In 1997, this hard worked act culminated in the HBO special, Bring the Pain. The Emmy-winning performance marked him as the top performer of his generation.

He followed up the special with another special, Bigger and Blacker, only a year later. The special is equally critically lauded.

His model of doing movies and television shows to get people more interested in his stand-up is often the modus operandi for many comics working today.

Stage behavior: pacing the stage, dropping the mic to the ground at the end of a performance.

A student of the art form, Chris Rock keeps an iPod that is filled with all comedy albums. He worked similarly when he first took to the road after SNL, listening to Richard Pryor and Woody Allen.

Chris Rock’s delivery, obstinate, staccato-gruff, is like a mean little kid who feels obligated to tell the truth—especially if it’ll shock adults. The shock laughs Rock generated made him one of the fastest rising young comics of his time.

With a mischievous smile, Rock makes his earthy comments sound far less offensive than they might seem on paper. From his first comedy album:

“Black people aren’t crazy. Black people do stupid things, black people snatch rope chains and rob liquor stores. Black people generally aren’t crazy. When you watch the news and hear somebody got their head chopped off, or somebody drank the blood and used the toes to play pool with, chances are that was a white guy! An old lady kicked down the stairs for a welfare check? Black guy! “Gimme dat fo’ dollah check!” Brothers’ be in jail for the stupidest shit. White guy in jail: “Embezzling funds.” Black guy, what are you in jail for: “Socks. Took me $48 worth a’ socks! My feet was feelin’ GOOD.”

Chris was born in South Carolina, the first of seven children. The family moved to New York and Rock grew up in the tough Bedford-Stuyvesant district of Brooklyn. The toughest part of growing up may have been Julius Rock, Chris’s father. Julius drove a truck for the Daily News and drove his son hard, asking tough questions: “Didn’t do your homework? What kind of man you gonna be?”

At the age of seven, Chris got out of the neighborhood—at least, during the day. He attended an all-white school that was a long bus ride away. “I was made to feel really bad every single day,” he recalls. But somehow the experience of being among whites enabled him to become one of the few black stand-ups to attract an equal audience among blacks and whites.

Rather than exclude whites via openly racist gags ala Martin Lawrence, Rock brings them in, as the routine previously quoted shows. In Rock’s world, whites and blacks are equally ridiculous.

Rock quit school at 17 and took a variety of low-wage jobs in places ranging from Red Lobster to McDonald’s. Along the way he practiced stand-up in local clubs and was discovered by Eddie Murphy while doing a gig at The Comic Strip, an East Side nightclub in Manhattan. With some help from Murphy, Chris was booked on HBO’s “Uptown Comedy Express.” He appeared in Murphy’s “Beverly Hills Cop 2.”

He attracted some attention when he joined “Saturday Night Live,” developing parodies of militant blacks (Nat X) and rappers (I’m Chillin’). These routines further endeared him to white audiences, while the truth of his satires of black pretentiousness wasn’t lost on blacks either.

Rock was not a natural in sketch comedy but worked at his acting skills, eventually turning in credible performances in a few films, “New Jack City” and “CB4.” Although he was certainly the first vibrant black performer on “Saturday Night Live” since Eddie Murphy, Rock was underused and restless. He bolted from the show in 1993 and joined “In Living Color.”

When the show folded, Rock moved back into full-time stand-up, starring in a 1994 HBO special “Chris Rock: Big Ass Jokes” (it won a cable Ace Award) and then winning over critics with his breakthrough 1996 HBO special “Bring the Pain.” The show won two Emmy Awards and the cable channel handed him his own show. Chris married his girlfriend of many years, Malaak Compton (a UNICEF consultant) and found himself at a peak in both his professional and personal life.

He’s been able to remain at this level, continuing with his own talk/sketch program for HBO, making albums, touring in stand-up and enjoying high-profile co-starring roles in movies (he added some punch to “Lethal Weapon 4” and supplied the hilariously agitated voice of a hamster in Eddie Murphy’s Doctor Dolittle.”) In 1999 he turned up on the cover of Vanity Fair and other magazines and was touted as one of the hottest comedians in the country. His “Roll with the New” comedy album won a Grammy.

He’s still best in stand-up where the skinny comic grins broadly and fires grenades at all targets. Oprah Winfrey had Chris Rock as a guest, promoting his HBO show. She seemed a little flustered by the unpredictable young comic. She warned her viewers that if they tuned into his HBO show, they should know that “Anything goes! It’s not for the weak-minded!”

Actually, weak-minded people of all races and creeds are the only ones who might not get a laugh from Chris Rock. But he’d just dismiss them with the title of his New York Times bestseller book: “Rock This!”

Chris hopes to become a successful middle-aged and older comic, ala his idols Eddie Murphy and Bill Cosby. Says Chris, “In comedy you can keep getting better and better till the day you die. It’s not like you’ll be sidelined because you have a torn rotator cuff. My job is to make people laugh.”

in 2008, Chris Rock attempted something different for his next special “Kill The Messenger.” The special cross cuts between three performances from his world comedy tour in London, New York and South Africa, often with him delivering the set-up of a joke in one city and the punchline in another.