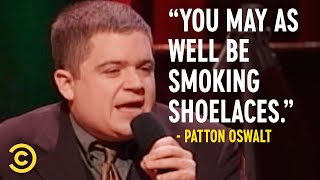 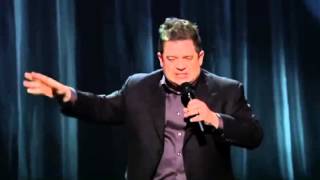 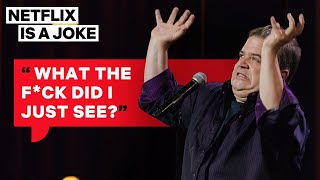 Patton Oswalt was born in Portsmouth, Virginia. As a child he moved often as he grew up in a military family. One of his first exposures to stand-up comedy was his father’s stash of Jonathan Winters records.

In between his freshman and sophomore years at the College of William and Mary, Oswalt began to look for work that he thought might support himself as he pursued a writing career. One of the things he tried that summer was stand-up comedy. Despite all the frustration and difficulty that’s common to first time stand-ups, Oswalt loved it and kept coming back to perform. In 1989, he began to work open mikes in the Washington, D.C. area, the same ones that comics like Dave Chappelle worked. One of Oswalt’s first jokes was about how he would be a good idea to remove the letter f in the word “of” because it would make things sound less bad. As in “I have cancer o’ the cervix.” The joke brought his first praise from fellow comics.

Oswalt immersed himself in the world of stand-up, focusing on getting as much stage time as possible. Oswalt was engaged to be married at the time, and the frequent non-paying open mikes put a strain on the relationship with his fiancee.

By 1992 Oswalt and his fiancee had broken their engagement and he decided to move away from DC, whose comedy scene had turned for the worse in the early 90s stand-up bust. He headed to San Francisco, whose scene was still relatively vibrant, bringing in many comics like Dana Gould, Marc Maron and Brian Posehn. Many of the comics tended to what became known as “alternative”, simply meaning that they broke away from the norms that had put a stranglehold on stand-up. They would do what they enjoyed and hope an audience would find them and enjoy it too.

Despite the vital scene, stand-up comedy as a business was still contracting, eventually leaving San Francisco with few spot where a paying gig could be found for a local. In 1995, Oswalt moved to Los Angeles, where the seeds of many scenes gravitated. The years of two shows a night, every night paid off and Oswalt soon began headlining clubs in 1996.

More recognition followed: In 1999 Variety maked him as one of their “10 Comedians to Watch.” In 2002 he was named the “It Comedian” by Entertainment Weekly.

In 1999, Patton Oswalt did a Comedy Central Presents special that he disavows, saying he allowed his performance to be changed by network concerns. When he next had a special on Comedy Central, the one-hour “No Reason to Complain”, he vowed to not make the same mistake. The 2005 show is firmly his and his alone and he’s stated his pride in how the performance turned out.

In 2004 he released his first comedy CD entitled “Feelin’ Kinda Patton.” It captures an edited version of a performance at the 40 Watt Club in Athens, Georgia. The full performance was made available on a record called “222” which refers to the 2 hour and 22 minute run time. Performing at rock music and other venues was a trend Patton continued in the later project “The Comedians of Comedy”, a comedy tour featuring Brian Posehn, Zach Galifianakis, Maria Bamford and himself. Different legs of the tour have been captured as documentaries. A west coast tour was made for Netflix as a movie, the second tour, which focused on the northeast, was made into a six-part series for Comedy Central. Comedians of Comedy continues past these filmed incarnations, only changing up the line-up occasionally to include comics like Eugene Mirman.

Patton Oswalt has been a part of several successful movie and TV ventures in the past few years. The one that he’s most known for is his nine-year run as the character Spense on “The King of Queens.” It has occasionally affected his stand-up because of expectations that he is more like Spense than he really is, but never in a major way. He will voice the main character in the upcoming Pixar animated film “Ratatouille.” Here too, his stand-up has played a role, with Disney using Oswalt’s stand-up ties to create a stand-up contest to promote the film. Despite his success in both film and TV, Oswalt is firmly focused on stand-up, viewing those other aspects of his career as secondary.

In 2007, Patton Oswalt released his second CD entitled “Werewolves and Lollipops” on the Sub Pop record label. The CD was recorded at the Cap City Comedy Club in Austin, Texas. The package will also include a DVD of a 40-minute set Oswalt performs at the 40 Watt Club.