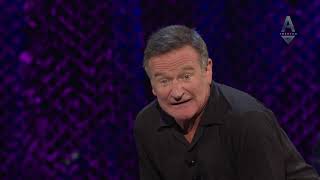 Robin Williams - Weapons of Self Destruction 2009 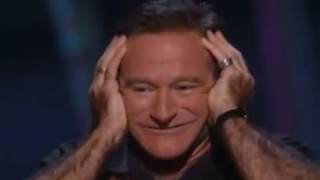 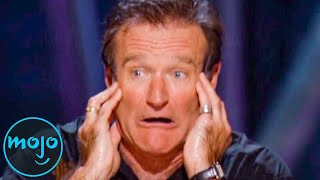 Robin Williams, while struggling for addictions for coccaine and alcohol, has not had his stand-up marked by them, staying more playful rather than raw.

As a youth, Robin lived a lonely life fulfilled only in fantasy. His father was a wealthy executive with Ford Motors and Robin lived in a 30 room mansion. He had an entire floor to himself as well as the use of the expansive basement that housed his two thousand toy soldiers. The chubby kid played down there, bringing his soldiers to life with sound effects and voices. When the family moved to California, the teenager went out for sports and turned into a slim, rather attractive young man well suited for his chosen career: acting. He attended Juilliard on a scholarship and trained with one of the severe-but-fun masters of the acting profession, John Houseman.

Williams enjoyed improvisations and found an outlet in comedy clubs. Influenced strongly by Jonathan Winters, Williams discovered he too could blitz audiences with the virtuosity of his voices and the hectic pace of his quick-change characterizations. In hip clubs where the clientele was often on booze, drugs or both, Williams seemed like a human cartoon—every now and then there was a scripted joke but the thrill was in the funny faces, funny voices and the energetic, improbable contortions.

If Morey Amsterdam had been a “human joke machine,” Williams was the modern computer, a computer programmed with old jokes and new twists, the best influences of both great comedians and great actors, plus inexhaustible energy. What came out was like a computer gone berzerk: all the ad-libs, improv, jokes and vocal impressions spewing out at once like confetti. And that became something unique: Robin Williams.

Other comics grumbled when Robin borrowed their jokes or catch-phrases, but he wasn’t intentionally stealing. He was a computer on overload, spitting out everything in its memory. The material was sometimes an extension of acting class (his bit “inside the mind” of a bombing comic), sometimes easy (Jack Nicholson doing “Hamlet,” Elmer Fudd singing rock songs) and often typical of the nightclub (a quick grab for the crotch to make sure “Mr. Happy” was home). But it was a fresh and innovative mix circa 1981. Like a brilliant rock guitarist or jazz musician, the virtuosity was enough at first. After several years, he became smoother, structured the improv “melody” with a steady beat (real jokes inserted periodically for structure) and serious, identifiable themes. He reached a peak in 1986 with his concert at the Metropolitan Opera House. The once merry prankster wasn’t sweating over his impression of “The Fly” in a 50’s horror movie or making fun of ringsiders’ drinks. He was straining and gasping over world problems, drugs, women’s rights, and children facing the future. While there were still plenty of easy laughs and schtick and George Jessel impressions, the underlying theme was innocence crying out for change in the world and to change the world. Williams, who favored childlike clothing (pants with suspenders and striped t-shirts), was persuasive as a symbol of youth newly confronting life’s realities (his catch-phrase: “Reality! What a concept!”).

It wasn’t just funny—it was touching. Williams envisioned the United Nations as “a traffic cop on Valium” wearily crying “Staaahp, staaahp. Best thing for the UN to do is go condo! It’s scary times!” He still wasn’t profound, but his comic frustrations and agonies were real.

By this time, there were many other avenues for his creativity, many ways to experiment with roles that often used his strengths as a youthful idealist or innocent. On TV, Williams had begun his career as one of the “zanies” of the new version of “Laugh-In.” Then he landed the role that made him a national star (something his stand-up hadn’t quite accomplished). He was Mork, the naive alien from the planet Ork on “Mork and Mindy.” The premise allowed Williams to do what every child does—point out the strange and foolish world of the adults. Most of the comedy was light and cute, the emphasis more on silly space-alien catch-phrases (“Na-nu na-nu”) and his ability to mimic everything in sight. But the show was still close to the truth. Mork, like Robin Williams as a child, and like most people at one time or another, felt alone in a strange world, needing love.

Finally, in films, Williams progressed beyond easy laughs. It was a difficult transition. Director Robert Altman’s film version of “Popeye” was strangely dark and moody, and though Williams could mimick the familiar voices and mannerisms of the heroic sailor, this was not his strength. A few more films like this, and film studios were doubting Williams’ box office potential.

“Moscow on the Hudson” was a mild hit, the sentimental story of a naive, eccentric Russian searching for a new life in America and facing a whole baffling new world. His first big hit was “Good Morning, Saigon,” playing a disc jockey who, like most teens in his early 60’s audience, was happy playing silly tunes and telling goofy jokes—until the nightmare of the Vietnam war began to shoot away at his innocence. In his Academy Award nominated “Dead Poet’s Society,” Williams and his character grew. How he was using his own optimism and energy to influence naive schoolkids as they began facing the realities of the world.

Off-stage, fans saw how the realities of stardom affected Robin. As he went from $25,000 for a 1978 HBO special to $750,000 for a 1983 concert, and from a minor cast member of “Laugh-In” to a huge TV and movie star, he lived in a fast-lane that included drug abuse. On a Barbara Walters TV special, Williams admitted his cocaine use was “a great way of escaping.” The overdose death of his friend John Belushi was a sad, literally sobering event. Unfortunately Williams’ first marriage was another casualty of the changes in his lifestyle. He married a second time and with his children Zachary and Zelda, found a stable home environment matched by healthful regimes of yoga, exercise and a vegeterian diet. His professional life became a balance of the two things that brought him the most satisfaction—acting and stand-up. When he is out promoting a new film, he’ll still jump into a local club and surprise the cheering crowd with a half hour of ad-libs and comic frenzy. “For me it’s therapy. Stand-up is the freest form of comedy, and also the scariest…I went to a therapist for a while, but I think that I can deal with my fears better up on stage…it’s healthier for me.” Just how he creates his comedy remains a mystery: “Analyzing comedy is like peeling an onion. You peel a layer, peel a layer, peel a layer, and then you go: “There’s nothing there.”

With movies beckoning, stand-up for Robin went by the wayside. The manic energy of his performances could only be seen in guest spots on a variety of talk shows and stints of hosting events like Comic Relief with pals Billy Crystal and Whoopi Goldberg. But in 2002, he returned to stand-up comedy, undertaking a 36 city tour of the United States. His twenty years away from stand-up brought out large crowds and culminated in a performance on Broadway entitled “Robin Williams: Live on Broadway” which was broadcast live, as the title suggested, by HBO and later released on DVD.

In later years, the skills he learned as a stand-up have served him while visiting the middle east to boost morale for the armed forced stationed in Iraq and Afghanistan.

With his trademark of exuberance and energy, Robin Williams became a blazing star in stand-up, TV and ultimately films. Though he rose in show business like a meteor, his early years were more like life on a cold, distant planet.