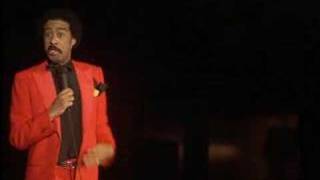 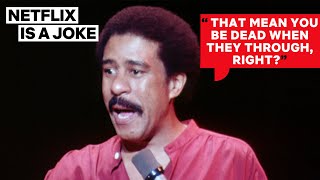 The most controversial stand-up comedian of the late 70’s, Richard Pryor fused together several styles of comedy. From the old Pigmeat Markham “open the door, Richard” school, he enlarged upon black dialect. From Lenny Bruce he learned how to deal with racial or sexual tensions without flinching from painful truths. And in the tradition of clowning contemporaries like Bill Cosby and George Carlin, he put it all together with manic faces and voices that made a “one man” concert seem more like a three-ring circus. Sometimes it all came together in one routine:

“I don’t mind women leavin’ me…but they tell you why. Fuck that, just leave…‘cause there ain’t shit you can say when they’re talkin’ to you. You know it’s true, all you can do is stand there and look silly…but women come back at your ass though. (Pryor to his woman) “I’m gonna find me some new pussy!” (Imitating the woman) ‘Yeah? You had two more inches of dick you’d find some new pussy here!’ ‘I know the dick was good to you. If it wasn’t good why was you hollerin’?’ ‘I was hollerin’ to keep from laughin’ in your face…’ Women are funny, Jack. They can regroup out of anything. You ever be makin’ love and air get in the pussy? (Outrageous sound effects). Women recover beautiful: ‘It’s talkin’ to ya, Daddy!’”

It wasn’t just the language that made Pryor infamous, though he was far more graphic than the latest trailblazer, Carlin. Pryor was the first comedian since Lenny Bruce to wrestle with dangerous racial humor, most of it intended more to amuse his own people and secondarily any whites who might dare to be hipped to his point of view. Fellow comedians, critics and white liberals flocked to hear “the truth,” while other whites called his act offensively “reverse-racist” at worst, merely rambling and obscene at best. The more controversy there was, the bigger Pryor’s star became, with many acclaiming him a genius, while others, quoting one of his comedy album titles, felt “That Nigger’s Crazy.”

Pryor was born in Peoria. Interviewers asking about his childhood years generally got evasive answers, hazy recollections or a few angry or pathetic recollections that might have been fact or fiction. Lenny Bruce was often the same way, even in his autobiography. One undisputed fact was that his parents separated and he was raised by his grandmother. After tough years on the streets, Pryor left high school and joined the Army. Afterward he became an mc, comic, and following Bill Cosby’s lead, a mildly swinging performer welcomed on TV variety shows of the day. At the turn of the 70’s he grew tired of the safe and phony routines he was doing, dropped out, and emerged with a tougher, hipper identity.

In 1972 he earned an Academy Award nomination for his acting in “Lady Sings the Blues.” He won a 1973 Emmy as a writer (“The Lily Tomlin Special”) and worked on Mel Brooks’ movie about a black sheriff out west, “Blazing Saddles.” Warner Bros. rejected Pryor for the lead in the film, choosing Cleavon Little instead. In 1974, 1975 and 1976 he won Grammy awards for his hot, controversial comedy and was nominated the next four years in a row. He won twice more in 1980 and 1981.

Among his many accomplishments, Pryor re-introduced stark drama to stand-up (his “Mudbone” monologues and other routines that did not go for the laugh every 20 seconds) and fractured ground rules on censorship (unlike Carlin, no one seemed ready to risk a riot by arresting Richard). The first stand-up comic to achieve box office success with a “performance” film, Pryor proved to the show business industry that people would be willing to watch one man on a stage for 90 minutes. A flood of stand-up films, videos and cable TV specials followed, for Pryor and for the rest who came after.

Pryor’s more orthodox movie comedies of the day were hits, too. Pryor’s mousy presence—the quivering voice, the popping eyes, the disbelieving and fearful expression—were not that far removed from black stereotypes in older films. The difference was that in addition to mirroring real fear and vulnerability, Pryor’s film characters were hip and heroic. His first film teamed with the gentle, white Gene Wilder, gave him his biggest hit, a “crossover” success among fans of all types.

Under pressure to constantly top himself, his own anger, suspicions and confusion rising with every fawning honor, interview request, or critique either pro or con, Pryor reacted with ever more open and potent iconoclasm and outrageousness. Aside from whatever he said on stage, off-stage he made headlines by insulting talk show hosts, ridiculing other performers, and inciting the occasional murder: “If you’re black and still here in America,” he said on “The Tonight Show” in 1979, “get a gun and go to South Africa and kill some white people.” His behavior set new standards for celebrity frankness. Ten years before angry boxer Larry Holmes said almost the same thing, Pryor shocked the crowd at a 1977 Human Rights Foundation benefit by saying “kiss my happy, rich black ass.” At that same event, he sneered at homosexuals for mincing about “on Hollywood Boulevard while Watts was burning down.”

Pryor’s personal life was even more of a shambles. His latest wife had to run for cover when he opened fire at his own car in the midst of an irrational shooting spree. Pryor’s drug use led to a heart attack. And on June 9, 1980, he tried to kill himself. Trying to get the truth out of Pryor was difficult at the time. At first he insisted he had accidentally set fire to himself while pouring a drink. Later the accepted theory was that he had been freebasing cocaine when the mixture exploded. Finally, in 1986, he told Barbara Walters that he’d lied: “My lawyer had made a statement—he didn’t know the truth…he was trying to cover my ass. So I was trying to cover his ass…I wanted to say it was no accident, I got crazy one night and wanted to kill myself….I remember pouring rum all over myself…I was ashamed of myself…I could only end up in a room smoking a base pipe…”

Pryor made a miraculous recovery from almost certain death, and to his surprise, the outlaw comic received overwhelming support from his peers and his fans. His life and death struggle was front page news around the country.

The struggle back to stardom remained. Pryor had a lot of trouble getting his comic act together. Perhaps the anger that had fueled so much of his work had been eroded by the outpouring of affection after the accident. Perhaps, as he said, going “straight” without alcohol or drugs had dried up some of his wild imagination. There was also the inhibiting factor of the long lay-off and the slight concern that fans might notice a few scars or see a new vulnerability in this once-burned and now shy performer.

Pryor did make a successful comeback and even created a routine about his burn experience and recovery, but by now, there was another hot new comedian around: Eddie Murphy. In the less tense early 80’s, Murphy’s happy sense of outrage and fresh, Pryor-influenced inventions eclipsed the now familiar routines of his idol. Several mediocre comedies weakened Pryor’s box office appeal. Asked how he felt about Murphy’s success, Pryor remarked: “Pissed off…I don’t like it at all….my wife helped me…she said, ‘You was #1 for a long time…”

His re-union film with Gene Wilder, “See No Evil, Hear No Evil” and “Harlem Nights” with Eddie Murphy were roasted by critics. Fans hoped that if he wasn’t enjoying great movie success, at least his personal life was straightening out. Unfortunately peculiar health problems began to surface. He looked emaciated on a “Tonight Show” appearance in 1986 as alarmed host Johnny Carson by intimating he had some kind of fatal disease like AIDS: “I thought Richard, it’s finally caught up with you. I thought I had one of them and I was going to die…my right eye is blind. You could hit me on this side and I wouldn’t see it coming.” Gossip writer Liz Smith quoted an ex-wife as saying he had used needles in his drug abuse. Pryor himself had once talked about homosexual experimentation, but said it had happened many years ago. In March of 1990 he suffered a second heart attack, this time while golfing in Australia.

On April 1, 1990, Pryor, whose previous brides varied between white, Jewish and black, re-married his fifth wife, Flynn, a Jehovah’s witness. She said he had proposed after returning from Australia: “He told me he wanted to spend his last days around people who love him.” In May of 1991 Pryor’s spokesman, Guy McElwaine confirmed that for the past five years Pryor was suffering from multiple sclerosis, but that it was in remission. In June he underwent triple heart bypass surgery. A month later critics noted Pryor’s weakened physical condition as he struggled through the summer ‘91 release “Another You,” his fourth teaming with Gene Wilder.