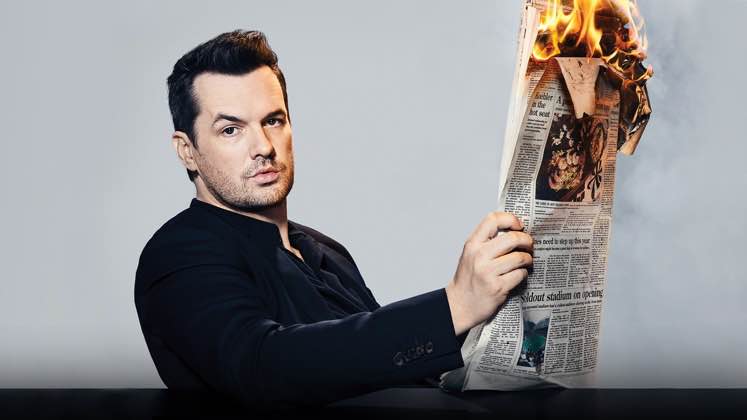 Australian born Jim Jeffries is a headline performer in countries such as America, Canada, Asia, South Africa, Europe and the UK.  Regarded as one of the fastest rising stars in the comedy world, his shockingly charming style has made him one of the most sought after comics on the world stage.  Jim gets away with jokes that most comedians wouldn’t touch due to his ability to both charm and offend the crowd with equal measures.

Jim returned to the Edinburgh Festival last summer, where he performed a month long, sold-out run of his critically acclaimed, smash-hit new solo show Hammered.  As one of the most successful acts at Edinburgh several years running, Jim performed for over 5,000 people.  Jim was the talk of the Montreal “Just for Laughs” Comedy Festival in 2007, wowing audiences with his performances in the Nasty Show, and most notably, his one-hour solo show.  Jim first appeared at the “Just for Laughs” Festival in 2005, where he performed in the highly acclaimed “Nasty Show,” and garnered one of the biggest press articles at the festival.

In England, he has appeared on such shows as ITV2’s “Comedy Cuts” and “If.Com Eddies,” as well as on BBC1’s “Heaven & Earth,” and BBC2’s “Never Mind the Buzzcocks.”  Jim was also on Channel 4’s “The History of Offensive Humor,” as well as “The World Stands Up” and “Edinburgh and Beyond” for the Paramount Comedy Channel.

After watching him perform at the 2008 Just For Laughs Festival in Montreal, HBO executives asked him to appear in their new comedy showcase “Down and Dirty with Jim Norton.”

In May of 2009, Jim Jefferies first hour special for American Television premiered on HBO. The special, entitled “Jim Jefferies: I Swear to God”, was recorded at New York University’s Skirball Center.

When Jefferies moved to the United States, he had to change the spelling of his last name, as there was already a performer named Jim Jeffries. The new spelling adds an “e” to the last name.