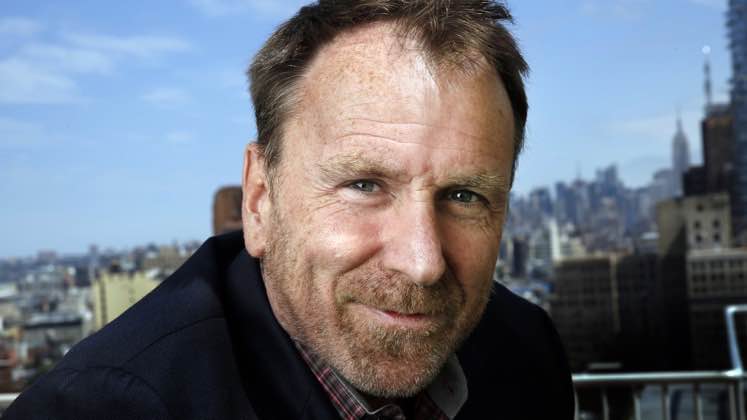 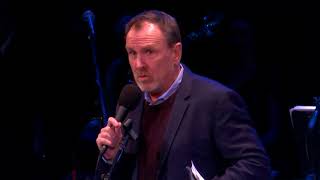 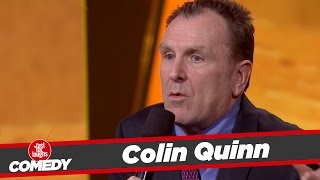 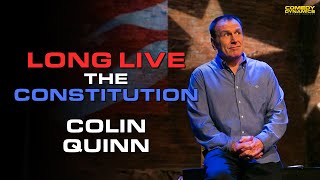 A born New Yorker, Colin Quinn grew up in the Park Slope neighborhood of Brooklyn. Before stand-up Quinn worked as a bartender.

Quinn started performing stand-up in 1985, right after his first year of college. A friend of his coaxed him into starting performing together. He claims his first performance was in jail, after cops picked up for buying drugs prior to his intended first performance at the Improv. He told the cops that he was a comic and ended up performing for them, to silence, in his jail cell.

In 1987 he became a co-host of “Remote Control”, a game show on MTV. Friends and fellow comics Adam Sandler and Denis Leary often made guest appearances on the show as various characters. He worked on the program for three years and continues his relationship with MTV with a sports comedy show entitled “Colin Quinn’s Manly World.”

Early in the 90s, Quinn hosted the A&E stand-up show “Caroline’s Comedy Hour.” One of his writers for the show was Jon Stewart.

Colin Quinn, as a good friend of Jerry Seinfeld, had a prominent presence in Seinfeld’s documentary on stand-up “Comedian.” On the DVD for “Comedian”, Quinn appears on the commentary track with Seinfeld.

In 1995, Quinn became a writer and feature player on “Saturday Night Live.” In 1997, he was upgrade to a cast player and in 1998 he became the anchor for Weekend Update, the fake news segment. He succeeded fellow stand-up Norm MacDonald. Quinn left the show in 2000.

Colin made his Broadway debut with a one-man show entitled “Colin Quinn: An Irish Wake” in 1998. The show portrays, often unflinchingly, the narrow failings of the working class Irish that he grew up with in his Brooklyn neighborhood

In 2002, Quinn created a prime-time sketch comedy show for NBC, but the show only lasted for three episodes. Along with poor ratings, some say NBC nixed the show due to racial content that made some advertisers nervous.

Quinn joined Comedy Central’s late night line-up in 2003 with his show “Tough Crowd with Colin Quinn.” The show appeared to be a round table discussion on he day’s issues, but was, at it’s heart, a bull session between stand-ups. Quinn modeled the show on late night conversations he would have with other comics at the Olive Tree, a restaurant above New York’s Comedy Cellar. Many of the comics who appeared on the show are close friends with Quinn. Regular guests included Patrice O’Neal, Nick Di Paolo, Rich Vos, Jim Norton. Many of these regulars ae close friends with Quinn, and took great joy in insulting him and each other. Tough Crowd ran for two years, airing it’s final episode Novermber 4, 2004 much to the dismay of those who grew to love Tough Crowd and its “cringe” style of comedy.

Quinn, who was a frequently drinker in his youth, and has since given up alcohol after having many episodes where he blacked out and, occasionally, arrested.

A trademark of Quinn’s performing style is his gravelly voice and his mumbling, mush-mouthed delivery.

In 2010, Colin Quinn began performing his one-man show “Long Story Short” Off-Broadway. The show, directed by Quinn’s friend Jerry Seinfeld, satirically traces all of human history and the rise and fall of civilizations in 75 minutes. The show soon went to Broadway, appearing at the Helen Hayes theater. In April of 2011, the show became an HBO special.

In Comedy Central’s countdown of greatest stand-ups of all time, Quinn made the list at number 56.