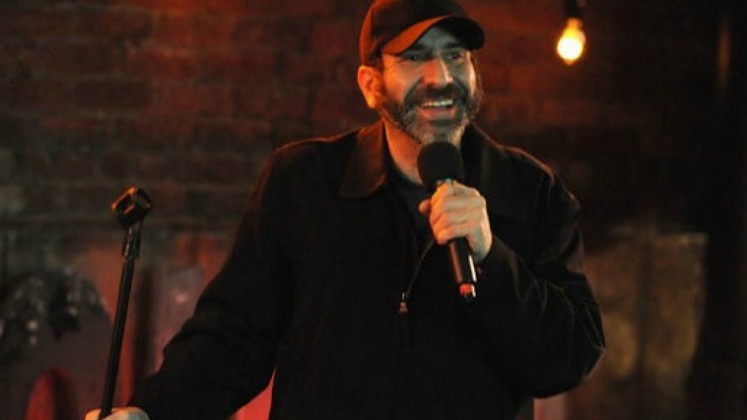 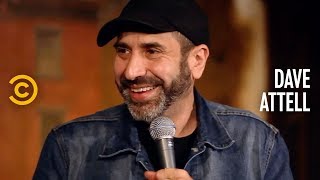 Dave Attell: “There Is No Romantic Way to Fist Someone” 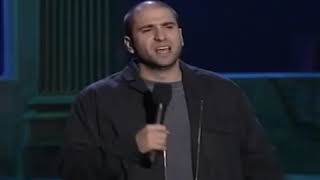 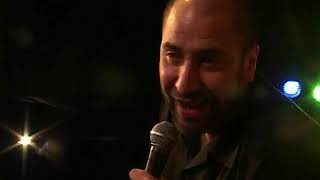 Hey, your mouth's not pregnant!

In 1987, Dave Attell graduated from New York University with a degree in communications. Uncertain of what exactly he should do with the degree, he ended up gravitating towards stand-up. He supported himself by waiting tables, cleaning houses and temping.

Attell’s first experience at stand-up was at Long Island’s Governor’s Comedy Cabaret, where like many first time comics he bombed. Many open mike nights were late at night, which Attell found to suit him well. Particularly the crowd, which responded to the twisted material that he naturally gravitated towards.

Because of his unique style, which is sometimes relentless about perverse sex and eviscerating crowds that object to it, Attell became heavily admired in the comedy community. He was the comic that comics would want to see - a “comic’s comic.”

Attell worked as a writer for SNL in the mid 90s, but didn’t let it get in the way of his stand-up. He would often sneak out to clubs to perform after his writing duties were done.

Dave Attell was named one of the “25 Funniest People in America” by Entertainment Weekly Magazine.

In 2001, Dave Attell used his after-hours life as a road comic to inspire his Comedy Central travel show “Insomniac with Dave Attell.” “Insomniac” always started with Attell performing stand-up in a local club in a city. These sets were presented more naturalistic, with the occasional rough patches kept in. Attell would sometimes even comment that after that set he needed a drink.

In the rest of the episode, Attell would seek out the charms of the city he found himself in, be they alcohol, bizarre clubs, weird jobs or just people on the street. Attell liked to describe it as, “Wild On for Ugly People.” Insomniac ran for four seasons with Attell ending it because the show had gotten too successful and made getting real footage of Attell hanging out in bars impossible. But he did continue Insomniac in a new way, by taking it international with specials in Germany, Brazil and Japan.

The travelogue was popular and drove audiences to see Attell perform live. After the fourth season of Insomniac, Dave Attell joined Lewis Black for the Comedy Central Live tour. The tour brought Attell to theaters, with larger crowds than comedy club and less distractions as well. Though Attell enjoys performing in theaters and wants to perform in more of them, he feels clubs are really his element - where he can go off script a bit and play with situations happening in the club. The late Mitch Hedberg, a fellow comic, also joined the pair for a few of the dates.

In 2003, Attell created his first comedy album for the nascent Comedy Central Records entitled “Skanks for the Memories.” The CD was recorded at the Comedy Works in Denver.

Attell later headlined an Insomniac tour for Comedy Central. Joining him on the thirty-five city tour as an opener was Sean Rouse. The tour culminated with a two hour concert at the Las Vegas House of Blues, where Attell and Rouse were joined by Greg Geraldo and Dane Cook.

Attell’s comedy is not so much storytelling, as it is jokes. Attell is a relentless rewriter and often contact his friends in comedy to ensure that his material is original.

When not on the road, Attell is a regular at the Comedy Cellar in New York City, sometimes performing several nights a week.