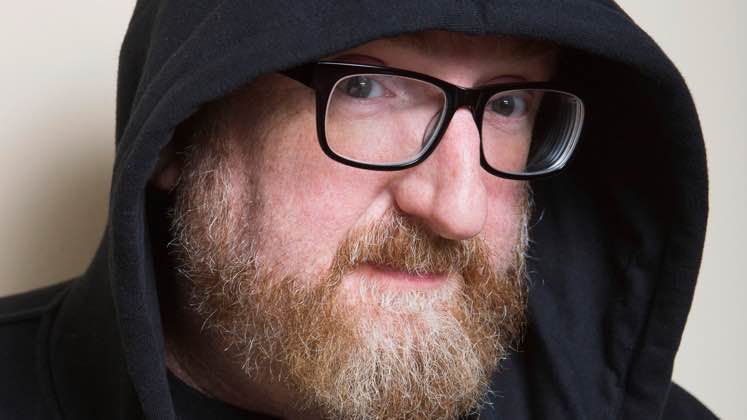 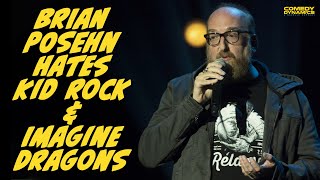 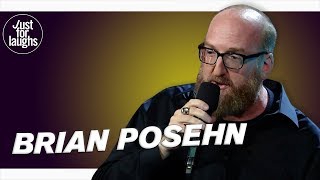 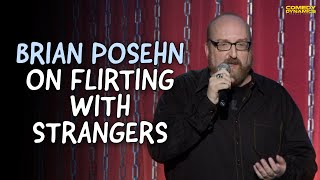 Brian Posehn on Flirting with Strangers

Posehn has had mainly small roles in TV shows, including the voice of Jim in Mission Hill and Del Swanson in 3 South. He appeared on an episode of Seinfeld, “The Burning”, playing a patient, when Kramer “was given” gonorrhea. Brian’s character was to “act out” how a surgeon left a sponge in him, to a cast of medical students. In addition, he has done the voice of Gibbons, a midget, on some episodes of Tom Goes to the Mayor. In another Adult Swim production, Aqua Teen Hunger Force, he voiced the Wisdom Cube in the episode “The Cubing”. Posehn portrayed a convenience store clerk in Dumb and Dumberer, and delivered the manuscript in which Joey Tribbiani’s soap opera character “Dr. Drake Ramoray” is killed off in an episode of Friends. He appeared as two different characters in NewsRadio—a fan with questions for Jimmy James at a book reading, and a member of Dave’s a capella group “Chock Full of Notes.”

Posehn appeared in the 2003 movie Grind as a customer at Chili ‘n Such, a fast food restaurant where the main characters work. He was also featured briefly as “himself” alongside Sarah Silverman and Laura Silverman in 2005’s Sarah Silverman: Jesus Is Magic. He also played Jimmy Cracker, roadie for Banjo and Sullivan, in Rob Zombie’s The Devil’s Rejects.

Posehn most recently surfaced on The Showbiz Show with David Spade for a segment called “The Nerd Perspective”. In the very first edition of “The Nerd Perspective,” Posehn gave a scathing criticism of MTV and its declining quality. He also was featured on the documentary series Comedians of Comedy on Comedy Central and Showtime. Currently, he is playing the role of “Brian”, Sarah’s gay neighbor, in “The Sarah Silverman Program” on Comedy Central.

In 2006 his first album, Live In: Nerd Rage, was released by Relapse Records. [1] It includes Metal by Numbers, a song mocking bands that term themselves “metal” but are clearly not. For the instrumental tracks he was able to have accomplished metal “legends” such as guitarist Scott Ian of Anthrax, one of the “Big Four” of thrash metal on guitar, along with former Anthrax touring bassist and member of Armored Saint, Fates Warning and OSI bassist Joey Vera and John Tempesta of Exodus, Testament, White Zombie/Rob Zombie’s solo work and The Cult on drums, and Jonathan Donais of Shadows Fall on lead guitar, all of which are members of “Posehn”, one of the bands that performed the two songs on his “Live In: Nerd Rage” album.

Brian Posehn is a funny man who has been in lots of funny stuff and is known to many as “that one guy from TV”. If you pay attention to what you watch, you might know him best as Kevin; the weirdo mail boy from Just Shoot Me, or from any of his guest appearances on other sitcoms (Seinfeld, Everybody Loves Raymond, Bernie Mac, The Showbiz Show with David Spade) and movies (The Wedding Singer, Run Ronnie Run, Dumb and Dumberer, The Devil’s Rejects). Most notably though, you know him as part of the creative core of HBO’s legendary, Emmy-nominated Mr. Show, his Comedy Central special, and from the critically-acclaimed Comedians of Comedy Tour.

Posehn’s ‘Live In: Nerd Rage’ reveals the hilarious observations of a self-professed nerd and life-long fan of heavy metal. At times the record is personal, nasty, dry, and absurd, but it’s always funny. Brian muses on being a teenage heavy metal fan, marriage, his dog Ernie, high-school reunions, body ‘parts’ and getting revenge on childhood tormentors. Recorded as part of Brian’s appearances on the Comedians of Comedy tour, and including a sketch with Bob Odenkirk (Mr. Show), ‘Live In: Nerd Rage’ is Brian at his funniest and will have everyone who hears it seeing the world through a totally different set of eyes.

Not just mere stand-up however, ‘Live In: Nerd Rage’ also incorporates two musical cuts; one by Brian’s heavy metal band POSEHN and another by TITANNICA. POSEHN’s lineup is a who’s who of the hard rock elite; featuring Scott Ian [ANTHRAX], Joey Vera [ARMORED SAINT], John Tempesta [WHITE ZOMBIE, THE CULT] with Brian himself on vocals. POSEHN slays with the soon-to-be-legendary original “Metal By Numbers” while TITANNICA [the metal band from the beloved Mr. Show sketch] delivers their epic track “Try Again, Again”.