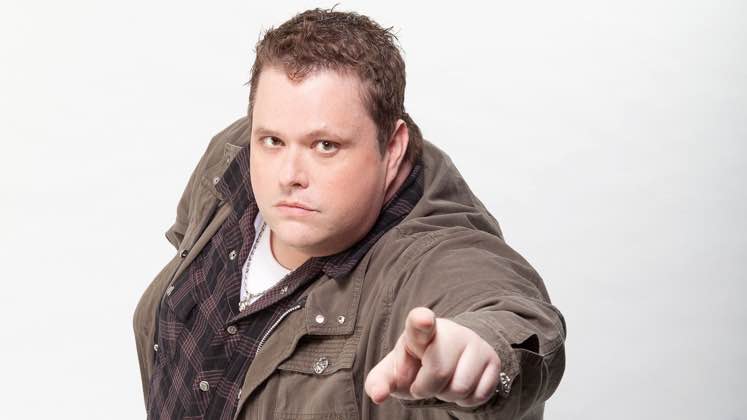 Tennessee-born Ralphie May knew he wanted to perform comedy since he was nine years old. He got his first opportunity to do so at just 13, at a talent show for a church youth group.

At 16, May was in a serious car accident, breaking 42 bones in his body. He was in a coma for 10 days. May says he can still feel the effects of the accident on rainy days.

At only 17, May won a radio talent contest that would allow him to open up for Sam Kinison, who was at the height of his popularity. May says that Kinison advised him to close with cussing out the audience, assuring the young May that the 3000-plus audience would go nuts for it.

However, it was only a setup. The audience immediately booed May off the stage and Sam came out and roared with approval with the crowd. A distraught May was about to leave when he was stopped by Sam’s brother Bill, who told him that Kinison thought May was funny and that he should stick around to party. Kinison encouraged May to move to Houston, a comedy scene which birthed both Kinison and Bill Hicks.

Kinison referred him to his home club in Houston, the Comedy Workshop. However by the time May could move to Houston, the club had closed. May instead found work at Houston’s Comedy Showcase, a club that appealed to black audiences. Many of May’s first TV appearances are on “Urban” showcases.

America’s first big introduction to May was during the first season of the NBC reality series “Last Comic Standing.” Performing and living in a house with nine other comics, May became an audience favorite and many were surprised and outraged when May finished second to Dat Phan. May has said that he believe his weight may have been what prevent him from winning the show. May has weighed as much as 800 pounds in the past.

Ralphie soon was able to capitalize on his new audience with his first hour special called “Just Correct.” A special feature of the DVD is footage of his performances on the USO Tour in Iraq.

Ralphie May’s second special and comedy album was somewhat of a homecoming to Tennesse. “Girth of a Nation” was performed in Knoxville in April of 2006. It aired on Comedy Central later that year.

In 2008, Ralphie was named one of Variety’s 10 Comics to Watch. That year also saw the release of “Austin-tatious”, a 90 minutes special filmed, naturally, in Austin, Texas at the Paramount Theater.

May prides himself on unique material… when he writes a new bit, he’ll often ask other comedians if they’ve heard a similar joke. If it is a little close to another comedian’s material, May will trash it, even if the other material hasn’t been performed for over 20 years.

May has had some recent health scares. In November of 2011, May contracted pneumonia while on a cruise ship. Following that, a blog clot from his leg caused him to suffer a pulmonary embolism. The experience scared May so much that he attempted to not sleep for 11 days while in the hospital, fearing he would die in his sleep.

The events have caused May to make some changes. He gave up smoking pot and has begun to take drugs to accelerate his low metabolism. May current weighs less than 400 pounds.

May is married to Lahna Turner, a fellow comedian. They wed in 2005. After having two children, they divorced in October 2015.

Ralphie May died of cardiac arrest on October 6, 2017. For several weeks prior, he had been battling pneumonia but still continued to perform his show “No Apologies” as part of his residency at Harrah’s Las Vegas. Just two days prior to his death he won Casino Comedian of the Year.