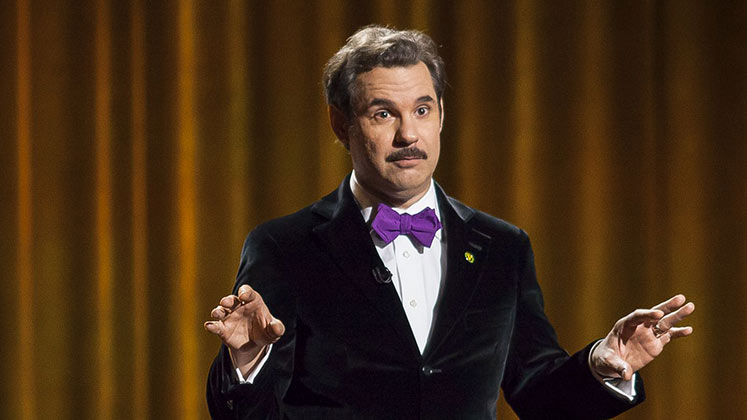 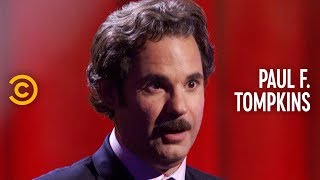 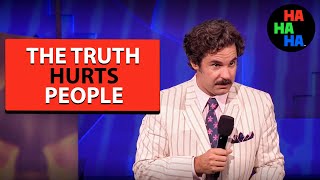 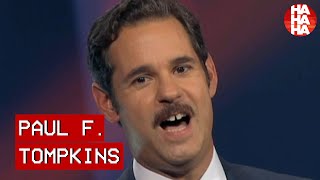 Paul F. Tompkins - The Problem With EVERY Horror Movie

Raised in Philadelphia, Paul F. Tompkins grew up the fifth of six kids. Dad worked on the railroads for 35 years. Mom served as a receptionists in a piano-tuning company owned by her brother.

Growing up, Tompkins was a huge fan of Steve Martin and Jonathan Winters and would often stay up to late to watch SCTV and the Tonight Show.

Tompkins attended college at Temple University, but knew what he wanted to do before he could complete his first semester. He dropped out soon afterwards and began his stand-up career in his hometown in 1986. His first gig was at The Comedy Works, working in a duo with the late Rick Roman.

Tompkins moved to Hollywood in 1994. Soon afterwards, he met Jay Johnston. Finding themselves of similar tastes, they founded a sketch duo entitled “The Skates.”

His work with Jay Johnston led to the pair working on the (unfortunately) cult sketch comedy show “Mr. Show with Bob and David” for HBO. Tompkins first worked only as a player in the first season, but then also worked as a writer in the second and third season. He won an Emmy for his writing. He also appeared on the similarly cult-comedy “Tenacious D” as naturally “Paul”, the host of the open mic where the duo frequently attempted to play. He later appeared in Tenacious D’s feature film “The Pick of Destiny”

In 1998, Tompkins wrote and starred in a one-man show “Driven to Drink.” Tompkins’ special dealt with the different between the “sober world” and the “drinking world.” He also manages to drink four beers in the course of the special. The special aired on HBO.

Paul most recently hosted “Best Week Ever” for VH1. Previously having been a commentator on the show, he became the anchor for the entire show when it retooled to focus on a single voice commenting on the week’s celebrity excess. The show is currently in hiatus until 2010, although there is some question if it will return at all.

Paul F Tompkins is known as a snappy dresser, which is somewhat, perhaps sadly, exceptional in the stand-up comedy world.

When in Los Angeles, Tompkins often hosts a regular show at the alt comedy haven Largo.