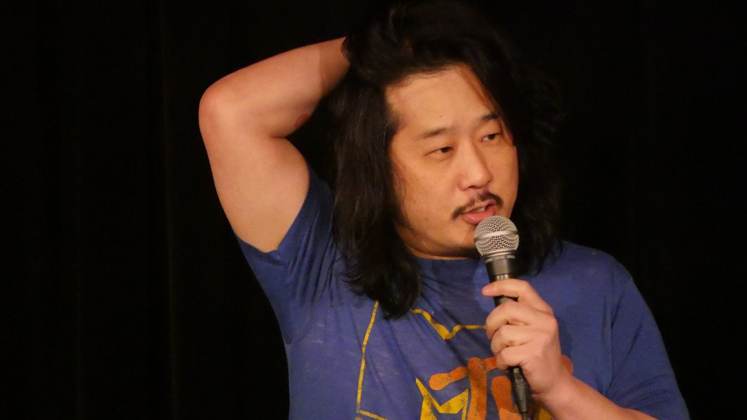 The first son to Korean Americans, Bobby Lee’s parents hoped he would follow them in the family’s San Diego area clothing store business.

Lee was more focused on fun. Particularly with marijuana and meth, starting at age 12. He went to rehab multiple times, ultimately ending his meth addiction at 17.

Lee soon moved away from home, working his way around jobs at restaurants after a short attempt at Palomar College. After one coffee shop for which he was working closed, he simply wandered to the establishment next door for another.

That was the Comedy Store La Jolla.  After a few months there, Lee performed at one of their open mic nights.  He soon found opportunities to open for Pauly Shore and Carlos Mencia, as well as to perform at the larger and more famous Comedy Store in Hollywood.

Despite the initial success, Lee’s family wasn’t supportive of his comedy career. As Lee described it on the podcast of fellow stand-up Joe Rogan, his family barely spoke to him. Appearing on The Tonight Show with Jay Leno changed that. His father called him, offering an apology for not being behind him sooner.

For a long time, Lee was best known for his sketch work on Fox’s “MADtv”, where he did impressions of Connie Chung and Korean Dictator Kim Jong-il. His whole family also appeared in a sketch for the show.

Post “MADtv”, Lee has trouble finding acting work again. He credits stand-up with saving his life. For a long time Lee believed he didn’t want to have the work the road like many headliners - and the demands of promotion and ticket sales. But the focus on something “more real” kept him more grounded than the ephemeral possibilities in the TV and Movie business.

Bobby Lee is married to Khalyla Kuhn, with whom he does the podcast Tigerbelly.  The pair met on the dating app Tinder.