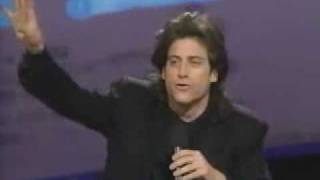 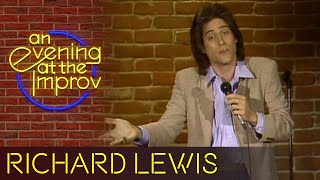 Richard Lewis - Hilarious Stand Up on An Evening at the Improv 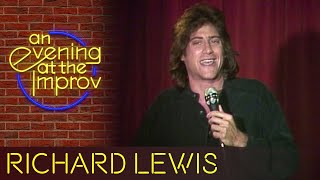 Richard Lewis Is Hilarious on An Evening at The Improv

Brooklyn-born Richard Lewis grew up in Englewood, New Jersey. His less-than-nurturing relationship with his distant parents became sources of frustration and later, comedy, for him.

Lewis first taste of show business was as a victim of the Allen Funt-helmed Candid Camera. In the prank, he took an aptitude test that ultimately concluded his ideal profession was as a shepherd.

Lewis attended Ohio State, graduating with a degree in marketing.

While working as a copy-writer, Lewis would occasionally write lines for other comics to perform. After his father’s death, it sparked in him the need to attempt performing himself.  In 1971, he first began to perform stand-up in the New York clubs, counting among his contemporaries David Letterman, Andy Kaufman, Billy Crystal and, of course, Larry David.

Early in his career, Lewis met the already-successful comedian David Brenner, who became a trusted “older brother” figure to Lewis. Brenner would advise Lewis on when he was ready for the next steps of his career and help him get gigs.

As a stand-up, Lewis was influenced by the neurotic persona and one-liners of Woody Allen.  The comics also felt a kinship with the manic, angst-ridden energy of Lenny Bruce.

Lewis played a stand-up in the made-for-TV movie “Diary of a Young Comic” in 1979. He also co-wrote the film.

Lewis performed his first hour for Showtime in 1985 with the special “I’m in Pain.” He followed up his hour with a new hour for HBO with a similar title, “I’m Exhausted.” The next HBO special followed a similar pattern. It was titled “I’m Doomed.”

Lewis claims credit for popularizing the phrase “the ______ from hell.” He’s cited for the phrase in the Yale Book of Quotations, but Bartlett’s disputes his ownership of it, claiming it was in common usage prior to Lewis.

In 1989, Lewis stared on the sitcom “Anything But Love” with Jamie Lee Curtis. The show ran for four seasons. The show helped make him a household name outside of stand-up circles.

In 1994, after years of being an alcoholic, Lewis gave up drinking. Both drink and drugs help fuel his performances early in career, but Lewis believes the clarity he has now has made him an even better performer, allowing his material to be more honest.

2000 saw the release of Lewis’ autobiography “The Other Great Depression.” The book details much of the neurosis and compulsions that drove Lewis’ life.

Regularly playing himself on Larry David’s Curb Your Enthusiasm brought out a whole new fan base to discover the comedian. In 2005, he reissued his first three hour specials together on a DVD collection entitled “Concerts From Hell - The Vintage Years” A long interview on his life and career is a special feature included with the collection.

Lewis has been a regular on David Letterman’s late night programs since 1982, making over 60 appearances.