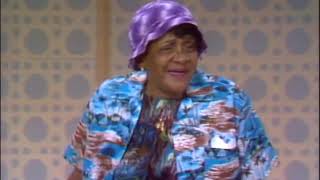 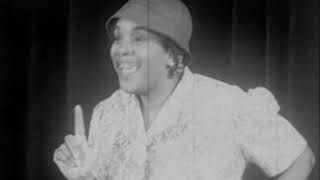 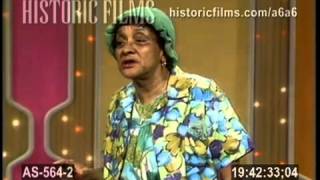 One of the most amusing and beloved “characters” in comedy, earthy Moms Mabley would come out on stage in a garish, bulky dress and start lecturing the audience as if they were her children. She was comically stern and raucously emphatic, laying down her philosophies of life and love: “Love is just like a game of checkers, children. You sure got to know which man to move! ‘Cause if you move the wrong man, and he jump ya, tear your Mason and Dixon line up!”

Her favorite subject was changing times. She talked about her own problems with it: “Anybody who acts normal nowadays they’re probably just not well! I’m tellin’ you, I just don’t understand. If I go too fast, I’ll run into something, if I go too slow somethin’ll run into me.” Though she looked comically battered, rasping out her routines through a seemingly toothless mouth, her words were hip, her delivery feisty. A running gag was her hunt for swinging young men: “The only thing an old man can do for me is to get on a bicycle and bring me a message from a young man!” She insisted, “A woman is a woman until the day she dies. But a man’s a man only as long as he can!”

Few watching her antics on stage could have believed the misery in her own life. Born in Bravard, North Carolina, “Moms” became a mother while in her teens—against her will. She was raped twice, once by a black, once by a white, and in both cases gave the baby up for adoption. Her fireman father was killed in the line of duty and her mother was run over by a truck after coming home from Christmas church services. At 14, the girl was earning a living in show business, with no home to return to.

She got her stage name from her first real love, Jack Mabley. In later years, that name and her burlesque-style delivery led some unknowing fans to wonder if “Moms” was really a female impersonator. Clarice Taylor, who created a one-woman show called “Moms” in 1987 and had a sucesssful off-Broadway run with it reported that in her later years Mabley was a lesbian.

Mabley worked the black vaudeville circuit, arriving at The Cotton Club in 1923. She appeared in several Broadway revues and in 1939 was one of the first female comics to co-star at The Apollo Theater in Harlem. She evolved the “Moms” character early on, based on her grandmother. By the time white audiences discovered her, thanks to a Harry Belafonte TV special “A Time for Laughter” in 1967, she looked like a grandmother and she was at her raucous peak, revitalizing even the oldest jokes with her unique delivery. She recorded many comedy albums, even though she really had to be seen to be believed (and her garbled delivery style was not always easy to understand on disc).

Some of Mom’s philosophy was simple to understand: “My slogan is, by all means do what you want to do. But know what you’re doin’.” Moms was riding high in 1974 when she finally got the chance to star in her own film, “Amazing Grace.” Unfortunately the strain of making the film, and her own advancing age, conspired against her. Her health weakened and she suffered a heart attack, causing a severe drop in weight. She died not long after the film was released, but to the end, she was always the remarkable Moms, joking as she imparted her words of wisdom, lovingly but firmly, without apology: “Ain’t a person in the world I don’t love,” she said. “Nobody ever gave me nothing, and I ain’t never asked, either.”