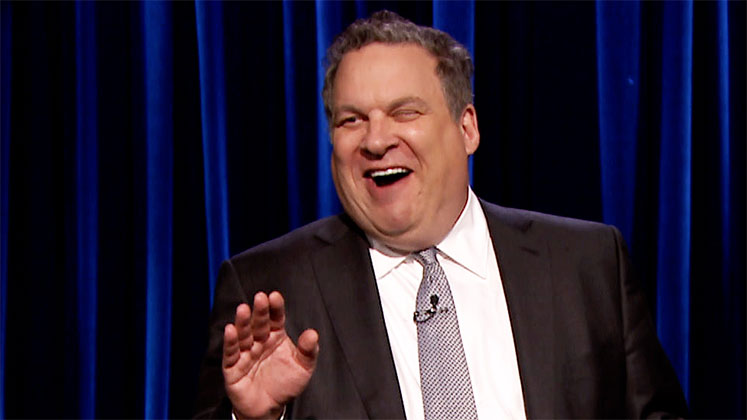 Known for his relaxed improvisational style and baritone voice, Jeff Garlin has appeared in numerous films, and stars in and co-produces Curb Your Enthusiasm with Larry David.

Garlin grew up in a Jewish family in Morton Grove, Illinois. As a child, he enjoyed sports but had to quit because of Wolff-Parkinson-White syndrome, a heart defect that elevates the resting heart rate. Garlin
eventually made the drastic decision to fly to Oklahoma to be an early recipient of a surgery for the syndrome. The surgery was successful and has since cured millions afflicted by the defect.

Garlin moved to Chicago in his early twenties to perform stand-up and became a member of the famed improv troupe The Second City. To pay rent, he worked in Second City’s box office with fellow improviser Stephen Colbert. Later in the decade, he became roommates and friends with Conan O’Brien in Wrigleyville, Illinois. During this time, he worked with various comedians, including Denis Leary, Larry David, and Jon Stewart, to help develop their material and direct their stand-up specials.

Garlin is most well-known for his role as Larry David’s supportive manager on the entirely improvised HBO show Curb Your Enthusiasm. His exasperated comic persona on Curb has led to similar supporting roles on Arrested Development, The Goldbergs, and Mad About You, as well as cameo appearances on dozens of TV shows.

Before filming the first season of Curb, Garlin suffered a stroke that caused him to slur his speech while filming. He was only 37 at the time and the incident became a wake-up call for Garlin.

Since then Garlin his spoken openly about his weight issues and struggles with type II diabetes. He has likened his sweets addiction to alcoholism and centered his memoir, “My Footprint: Carrying the Weight of the World,” on his new dieting regiment.