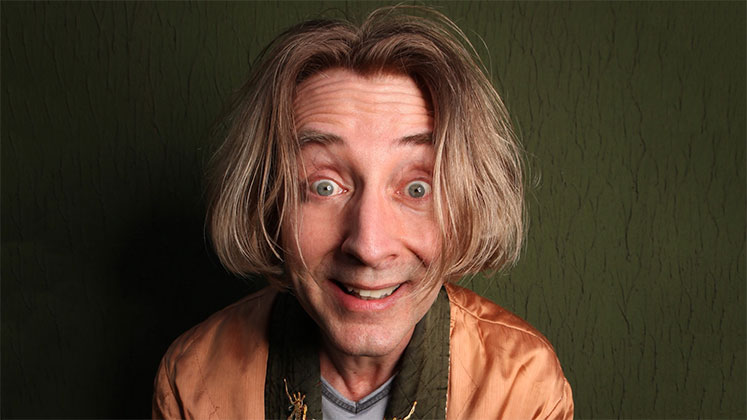 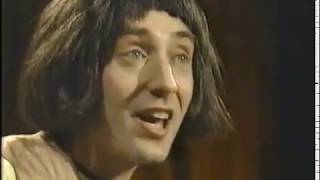 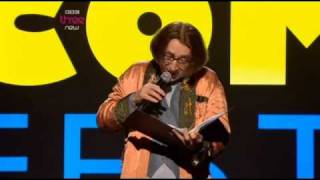 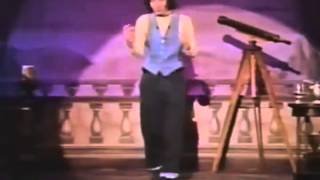 One of the strangest stand-up comedians to emerge in the 1980’s, Emo Philips created his own unique character that some, groping in vain for comparison, likened to a combination of the awkward child-man Pee Wee Herman and the spacey wit Steven Wright. Like Pee-Wee, Emo took innocence to an alarming Village Idiot extreme. Like Wright, clever one-liners were a trademark: “I’m not a fatalist, but even if I were what could I do about it?”

Wearing pajama tops and baggy pants, or perhaps one of his thrift shop items like a fancy gold smoking jacket and mis-matched slacks, beanpole-thin Emo would slowly lope onto the stage like a shy child, blinking his wide eyes, sleepily running his hand over his forehead and the unique botched Dutch boy hairstyle that framed his face like a hairy wishbone.

Using a breathy, somewhat high and hollow voice, his cadence uneven and slow, he’d talk about his misfortunes: “I was in a bar a few nights ago, moving from stool to stool, trying to get lucky…but…there wasn’t gum under any of them…and I heard giggling behind me…I turn around. These two guys, for the last half hour or so, have been throwing darts into my head…It’s a good thing I heard them…I said…‘Look, you bums.’ I was angry now. I said, “As soon as this game is over, hit the road.” As I left the bar…one thing stuck in my mind. That is, that there’s lots of weirdos in this world.”

The sublimely weird comedian was born in Chicago but grew up in Downer’s Grove, Illinois with sisters Kiki and Susan. His father was a postal worker who died in 1978. Emo left the University of Illinois in 1976 and began performing. He went through several name changes (he felt “Soltanec” sounded too Satanic) before arriving at Phil Kidney—and then Emo Philips: “The way I started out, I had three minutes and went to a small place and I tried it out. One thing out of that three minutes got a laugh, so I kept that one thing and the next day I wrote three more minutes. Maybe two things got a laugh. And I kept this process going until after two years I had half an hour of good material. Then I fell down a staircase and hit my head and forgot everything and had to start over.”

At first, audiences simply responded to the strangeness, laughing at the forlorn child man’s hapless tales. But along the way, Emo began to assert his sly wit and an undercurrent of anger. A report on being stopped for a traffic ticket turns into bizarre but pointed satire. “I said, ‘Officer, I’m taking my mom to the hospital. She OD’d on reducing pills.’ He said, ‘I don’t see any woman with you.’ I said, “I’m too late…” He said, ‘You’re under arrest. You have the right to remain silent. Do you wish to retain that right?” I thought, “Ooooh! A paradox…” Told to walk a straight line, he innocently remarks, “Well, Officer Pythagoras, the closest you could ever come to achieving a straight line would be by making an electroencephalogram of your own brain waves.”

Like his friend Judy Tenuta, Emo would usually be in character for his interviews, deflecting questions with the same innocence and slyness used on stage. Asked to analyze his absurdist humor and his combination of tragedy and comedy, he sighed, rubbed his eyes and said, “There’s always a fine line between comedy and tragedy. Especially when I do a show. And boredom is always an undercurrent. I never thought of myself as unique really. I just try to talk about life and help others. I want people to see my show and walk out afterwards saying to themselves, ‘Well, we got that over with.’”