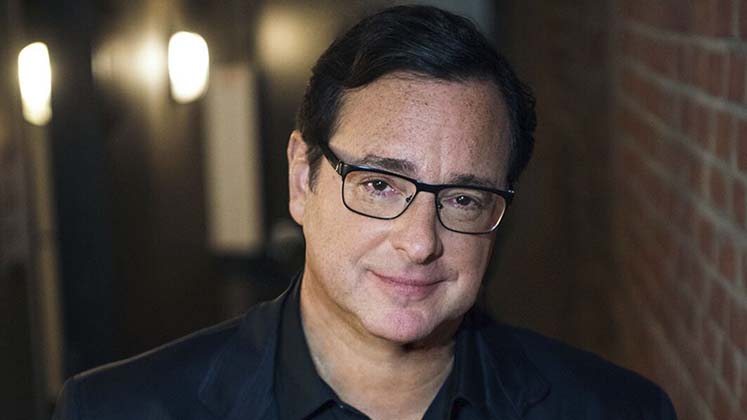 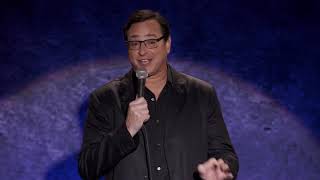 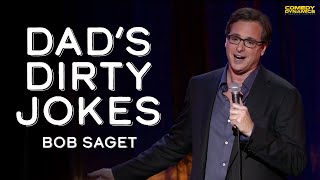 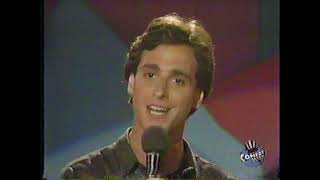 As a stand-up comic in the late 80’s, 6’ 4” Bob Saget’s persona was a “Nerppie,” a cross between a nerd and a Yuppie. Audiences were sympathetic. He seemed to want the best of the Young urban professionals’ lifestyle but—he was too much the average dork to succeed. Embarrassed recounting his mistakes in dating, his act was one big self-conscious apology, complete with forced smiles and parenthetical (“I’m sorry—I don’t know why I said that”) fumbling. Blandly pleasant, middle class, and possessing a nice guy’s lack of cool, the grad from Philadelphia’s Temple University was a promising minor league variation on Garry Shandling and Jerry Seinfeld.

His well-scrubbed semi-good looks and ready, V-shaped smile helped him land a job as comic relief on CBS’s “The Morning Program” for a while. A sitcom deal followed, and Saget’s pleasantly mediocre “Full House” was noticed by enough viewers to keep it going past the usual 13 weeks. His luck continued when another show he was hosting, “America’s Funniest Home Videos,” became a novelty hit. The show, based on a Japanese series called “Fun with Ken and Kato Chan,” was brought to America by Vin DiBona, who had assembled a fine comedy/nature film clip series for kids, “Animal Crack-Ups.” Saget’s role consisted mainly of filling in time between video clips, trying in his becomingly self-conscious way to make these breaks as painless as possible. He admitted, “They were looking for a young guy with some experiene whom nobody knew much about…If there was a famous person (hosting the show) the actor would always overshadow the tapes. What makes the show work are the tapes.”

While critics fumed over the clips of babies falling down on their po-po’s, fat ladies losing their dresses at weddings, and various dogs and cats forced into doing stupid tricks by their owners (or vice versa), Saget found himself given carte blanche for an HBO special and in demand for stand-up shows around the nation. His reaction to all of this? Embarrassed smiles, of course. And everyone was charmed. Well, almost everyone. Newspapers reported the time he was playing with his 3 year-old daughter Aubrey. He held her over his head and cried “Gootchy gootchy goo!” She threw up on his face.