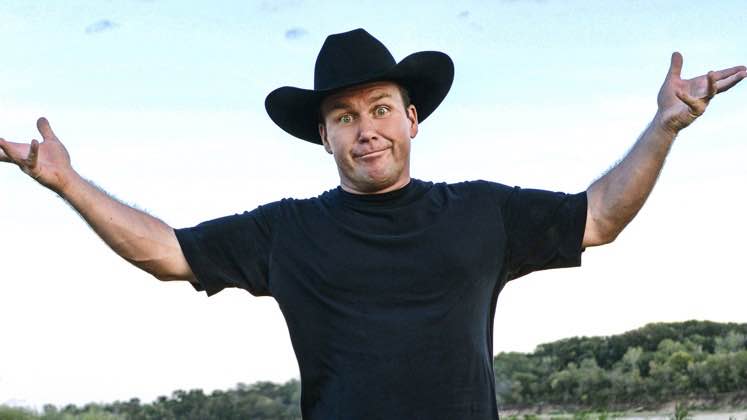 With the release of a major new CD, live concert DVD, television special and book, 2007 promises to be the best (and busiest) year ever for multi-million copy selling Capitol recording artist and comedian Rodney Carrington.

King of the Mountains, Rodney’s first album of new material in more than four years, is releasing April 3. The album will be followed by a Comedy Central special (April 14); his first DVD, “Rodney Carrington Live at the Majestic Theatre” (April 24); and a book, Coming Clean (September). All will be supported by Rodney’s first full year of touring since the debut of his television show in 2004.

Rodney broke through with his major label debut “Hangin’ With Rodney” in 1998. The album, which featured fan favorite songs “Letter to My Penis” and “Fred,” sold more than 475,000 copies and established Rodney, with his trademark black cowboy hat, boots, and Texas twang, as the king of middle class comedy.

The next few years saw four more Top 10 albums: “Live”, “Morning Wood”, “Nutsack” and “Greatest Hits”, all of which continue to receive major radio airplay on both country and rock formats. “Greatest Hits,” a double CD, earned a RIAA certified Gold Record and is well on its way to Platinum. His major network comedy, “Rodney,” ran on ABC from 2004-2006.

Rodney considers the television show a two-year infomercial that took his career to new heights, and eventually sparked his creative side. “After the television show ended,” says Rodney, “I had renewed interest and energy to put toward my next record. I’ve been working on this album for five years, writing and then honing the material on the road. It’s the best material I’ve done in a long time. It moves at fast pace. It’s funny. That’s not a guess; that’s based on the feedback I’ve gotten from audiences.”

The album includes a live recording of Rodney’s stand-up and five song tracks (one live and four studio recorded), including the hilarious anthem “Show Them to Me” and the deeply personal “My Angel Friend.” The material is all new, but fans shouldn’t expect too much of a departure from Rodney’s previous work.

“If you like the things I’ve done in the past, you’re really going to like King of the Mountains. The style is the same. Early in my career I didn’t work the nicest places, so I developed a fast, quick style. The goal was to make people laugh so they didn’t have time to holler something out at you.”

The subjects, however, have changed with the performer. “The record has a little more maturity. No, not maturity. I should say growth. I’m older now. I think different than I did five years ago or ten years ago.

“My subject matter comes from personal experience. I’ve found that when your comedy is based on honesty, people respond. Each album has been a time capsule of what has gone in my life over that period of time. It’s a mixture of family material and my personal journey.

“This album includes things that occurred while I was in Los Angeles making the television show. It finds humor in my relationship with my three boys, who are between the ages of seven and twelve, and with things within my marriage. After being married thirteen years, complacency sets in. You think, ‘There’s no reason to workout because I’m off the market; I’m not trying to sell myself anymore.’ I think anyone can identify with this material, especially women. Married men really tend to let themselves go.” Of course, the album also includes material on classic Rodney subjects like drinking, fighting (trying not to), sex (trying to) and music.

Rodney’s popularity derives, in large part, from his closeness with his audience. Instead of moving to Los Angeles or Nashville, Rodney stayed in Tulsa, Oklahoma; he keeps grounded through frequent live shows. He has been a Pollstar Top 100 grossing concert act since 2001, reaching #28 in 2003 before television commitments forced him to cut back his touring schedule. Now that he’s back to full-time touring, he regularly sells out back-to-back 3,000 seat concerts in major cities.

“People feel like I’m someone they’re familiar with, someone that’s in their family or that they know. One woman told me, ‘You live what we live. You talk about what we live.’ People identify with the struggles in my life.”

Rodney has no plans to change his regular guy approach. “I have no agenda. I don’t want to change anyone’s mind on anything. But I feel an obligation to the people who support me. I want to entertain them, to be funny. I figure if I get the comedy right, success will follow.”