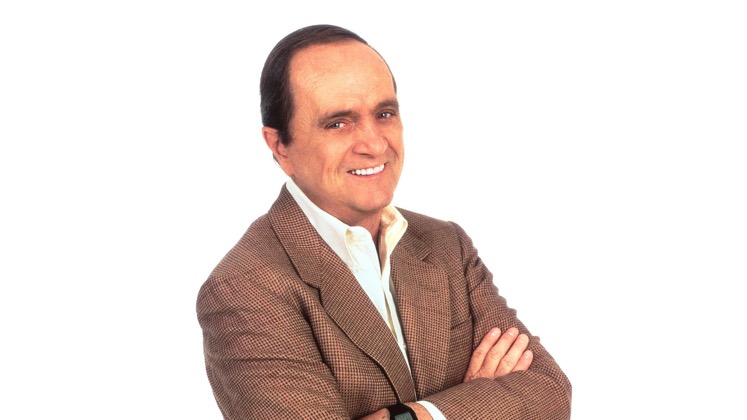 Bearing the worried, haunted look of a dog that doesn’t know why he’s been kicked, Bob Newhart became one of the best “reaction” comedians in sitcoms, leaving his cast members to be stupid, obnoxious and pushy—while the meek inherited the laughs.

His style was somewhat similar when he first became a star performing monologues, most of them one-way phone calls. “I’m not really saying anything funny,” he insisted. “What you’re laughing at is what’s unheard, which is what the other person is saying…on paper it’s not funny.” While some felt he owed a debt to Shelley Berman, Newhart cited other influences: “I learned timing from Jack Benny. He was so brave: he’d take all the time it took. I was also influenced by the almost Pinter-like quality of Bob and Ray. They would have these people that were boringly dull, just going on and on.”

Newhart’s routines were often stoic studies in chagrin and disbelief: phone calls to Sir Walter Raleigh and Abner Doubleday insisting nobody would ever want to smoke tobacco or play baseball, a study of a man trying to defuse a bomb (despite phone instructions describing one lethal wire as grayish blue, the other bluish gray), and the classic look at a driving instructor reacting to his pupil:

“Now that was a wonderful turn…one little thing. Uh, this is a one-way street. Well, now, now, it was partially my fault. You were in the left-hand lane, and you were signalling left, and I more or less assumed you were going to turn left…oh, now we hit someone, Mrs. Webb. Remember you were going to watch the rear view mirror? The red light blinded you? The flashing red light blinded you? The flashing red light—on the car you hit blinded you? Yes officer, she was just telling me about it…”

Newhart was born in Chicago and graduated from Loyola University in 1952. He had a degree in accounting but noted, trying to salvage some pride, that he was never a C.P.A. He got into comedy working with a partner, Ed Gallagher: “We did a kind of poor man’s Bob and Ray.” They syndicated a five minute comedy spot which was bought by only three stations in 1958, located in Northampton, Massachusetts, Jacksonville, and Idaho Falls. On his own a short time later, Newhart’s radio comedy attracted the attention of Warner Brothers. The “comedy boom” was on, spurred by Shelley Berman, and labels were hunting for new talent to put on disc.

Newhart, shocked and edgy, made his nightclub debut making his first album. The hand-picked audience laughed at Bob’s carefully written and performed monologues, but as he toured, he admitted “I died every night.” He remembered shows where he got no laughs but had to stay on the full twenty minutes—just to give the chorus girls enough time to rest and change their costumes. Fortunately, his brand of low-key nervousness suited his character; the mild-mannered average man dealing glumly with the frustrations of modern life. Audiences in raucous clubs began to catch on and listen.

While 60’s “sickies” like Lenny Bruce and Jonathan Winters seemed to live outside the norm, Newhart was perceived as Mr. Normal. But his satire was often biting, as in a routine about a would-be suicide coaxed off a building ledge (“this your first time?”) and a bitter look at an employee’s retirement party. Newhart’s stuttery timidity and self-effacing calm blunted the edge to his work, an edge more obvious in a strong, angry contemporary like Shelley Berman.

Newhart had to explain, “a pet peeve runs through my humor—the impersonal corporate bigness in modern life, and the individual getting lost.” Later he said of his stand-up days, “humor was the only way I could retain my sanity. I saw these indifferences around me and the only thing I could do was make fun of them. And once you’d made fun of them, you could go on to the next inconsistency…it really is for your own sanity that you become a comedian.”

His albums went gold, he won several Grammy awards in 1960 (best new artist, best comedy album, best artist of the year) and was rushed to TV. His variety show won an Emmy but failed to catch on. Another, with Carol Burnett (“The Entertainers”) was a shambles.

Newhart’s film career was never particularly strong. He tended to be typed as odious yes-men and company snitches. He was creepy Willard Gnatpole, the company man out to nab lovable crook Peter Ustinov in “Hot Millions.” In “Cold Turkey” he was conniving weasel, Merwin Wren, out to make a killing with a tobacco company (“Bottom line—this may be the greatest thing since creation”). His major starring part was unfortunately in the tasteless and boring “First Family,” playing a politician who becomes president after his opponent dies in a pre-election car crash.

In 1972, well after his initial fame died down, years after his last record album, his new sitcom was scheduled after the hit “The Mary Tyler Moore Show” and it had a comfortable success in that time slot for years. It was about a Chicago psychologist (Bob Hartley) grimly saddled with dopey friends, bent clients and a cloying wife. As with “The Mary Tyler Moore Show,” Newhart’s series left the air while still drawing respectable ratings. Later Newhart returned as Dick Loudon, former ad man and do-it-yourself book author and now owner of The Stratford Inn in Vermont, saddled with a new group of homely fools, notably the brothers Larry, Darryl and Darryl. Newhart knew audience identification with his everyman character was still strong: “I think there’s an identification with the character. I think that women watch and say, ‘My God, that’s exactly what Norm would have done.’ And then the men watch, and think, ‘Oh, God, I would have done it just that way.’”

The show continued on for many years, ironically having its best showing for its last episode—the first time in seven years that it hit #1. Newhart announced he’d probably try another sitcom after a brief vacation. He added, “I’ve basically been doing the same thing for 25 years and getting away with it!”