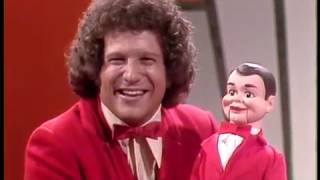 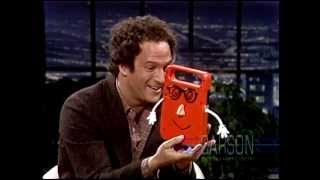 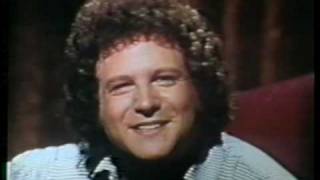 While he mystified some “Tonight Show” viewers and movie audiences, Albert Brooks became a cult favorite for his stand-up comedy in the 70’s and his films in the 80’s and 90’s.

Brooks was born in Los Angeles and attended Beverly Hills High School. He later studied drama at Carnegie Tech. The son of Harry Einstein, a comedian who performed Greek dialect routines as Parkyakarkus, Brooks knew comedy well enough to satirize it. He turned up on the summer show “Dean Martin Presents The Goldddigers” in 1969 doing a fake ventriloquist act and by 1972 was a frequent guest on “The Tonight Show.” The early 70’s was a tough time for a young monologist. With few comedy clubs around, the options were to either play the casinos and follow the old fashioned style of a Jack Carter (young David Brenner chose this path) or open for rock acts and try for the hip stance of a George Carlin.

Brooks wasn’t comfortable with either option. Instead, he chose to satirize the artificiality of traditional stand-up and find ways for he and the audience to subtly think their way through the routines. On “The Tonight Show” he once came out and began to read from the phone book (his tongue-in-cheek take on the cliche of a great comedian being able to get laughs from just a list of names. Another time he performed mime (while telling the audience every move he was making). Another routine was little besides Albert fretting over “running out of material.” While the audience squirmed with silent embarrassment, Brooks dropped his pants, pelted himself with a pie, and broke eggs over his head. Gradually they began to laugh at his comic desperation.

Brooks performed the kind of smiling, deliberately artificial “non comedy” that, in a more high-powered vaudeville mode, would win fame for “wild and crazy” Steve Martin.

For mild and Yuppie Albert Brooks, these experiments gained him the reputation as a clever “comedian’s comedian” and little beyond a cult following. Many audience members simply didn’t warm up to his parody of smugness and self-importance, figuring the joke was really on them. Probably Brooks’ most accessible routine was a musical parody in which (impersonating various idiots at an audition) he attempted to find an alternative to the dull and unsingable “Star Spangled Banner.” One of the entries was a cheesy cabaret singer offering a cheery “Hey! World! Look at Us!” A favorite was the blue collar hopeful who began his anthem, “While we stand here wait-ing for the ball game to start…”

Brooks made some short films for “Saturday Night Live,” many involving his put-on character of an annoying egocentric, but his brand of West Coast subtlety clashed with the live and acerbic action on the rest of the show. He went on to write and direct several films that tended to divide critics and audiences. Many didn’t care for Brooks’ style, which was to play annoying and obtuse types, from the ridiculous director of documentaries who aggravates the family he tries to film in “Real Life” to the overbearingly obsessive man who tries to win his girl back, nearly causes her to lose her mind instead, and makes a shambles of “Modern Romance.”

Crow Magazine probably summed up “Lost in America” best: “The nastiest indictment of the Yuppie mentality so far. Albert Brooks’ unpleasant and depressing story of a man and his wife dropping out of the rat race and hitting the road with a $200,000 “nest egg” and a Winnebago is a one-sour joke comedy, but so claustrophobic and unrelenting it is probably the best of that genre. Weeks later, you will find yourself laughing at lines you barely noticed the first time.” Brooks received an Academy Award nomination for his role in “Broadcast News,” a part in which some audience members were not sure if he was kidding (or satirizing) or not. A very typical line: “Wouldn’t it be great if neediness and desperation were a turn-on?”

Having dealt extensively with the plight of the upper middle-class and the insincere on earth, Brooks began the 1990’s wondering if there was any cosmic relief in heaven. He wrote, directed and starred in “Defending Your Life,” playing yet another self-absorbed self-conscious, selfish type. Having some troubles in the after-life of “Judgement City,” he had to wonder if he was “the dunce of the universe” for the way he handled things back on Earth.

Brooks received the same mixed criticism from those who were on his wavelength and those unamused. The only criticism that bothered him was when he was accused of whining.

“Please don’t say whine,” he told an interviewer, “Nobody could associate “whine” with anything but a kid you want to throw out of the car. Whining is complaining with no redeeming features. Let’s use another word. Let’s use “plead.” I plead: “Let’s change things, things are horrible here, help!” Did anyone accuse The Elephant Man of whining? He just said ‘Help me!’” 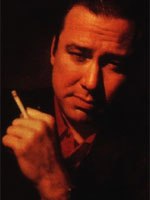