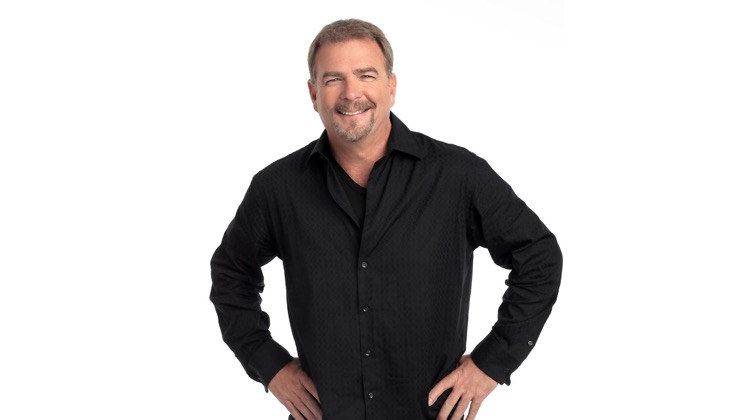 The thing that makes any entertainer successful is the ability to connect with an audience. It’s the quality of sharing the humor in everyday situations that has made Bill Engvall one of the top comedians today and among the busiest.
Bill is starring in and executive producing the new half hour sitcom for TBS entitled “The Bill Engvall Show.” The show centers on Bill as the father at the core of a family comedy. The series’ debut telecast on July 17, 2007 delivered 3.9 million viewers and 2.8 million households, securing a place among ad-supported cable’s Top 3 sitcom telecasts (original or acquired) of all time among households and Top 5 original sitcom telecasts of all time among key adult demos and viewers.

Bill also hosts one of the top rated shows on CMT, Country Fried Home Videos. This show finds real videos from real people showing what real Americans do bringing the wit and wisdom to television that only the heartland can offer.

Bill is currently filming the movie “Bait Shop” which co-stars Billy Ray Cyrus. The story centers around a small town bait shop owner who finds his beloved business threatened with foreclosure. In an attempt to raise the money to save it, he enters a high profile fishing tournament. The film will be released on DVD in the summer of 2008. Additionally, Bill starred in the movie “Delta Farce” with Larry the Cable Guy and D.J. Qualls, which was released on May 11, 2007 and distributed by Lionsgate. This hilarious comedy about three blue collar heroes on the military’s front line is currently available on DVD.

Prior to his big screen debut, Bill was one of the stars of the sketch comedy show, “Blue Collar TV,” on the WB network. The ensemble cast included Jeff Foxworthy and Larry the Cable Guy. Blue Collar TV premiered on July 29, 2004 at 8:00 pm. 5.4 million people tuned in to see “Blue Collar TV,” making it the second-most watched show in the time period. He also shot a special for the WB network called “Mobile Home Disasters,” which helped propel the network to one of its best Thursday nights of the season. The show was a blue collar version of “Extreme Home Makeover” and the episode took a deserving family and completely transformed their mobile home.

Along with his Blue Collar movies, Bill also has two solo specials which aired on Comedy Central. “15Â° Off Cool” aired on March 25, 2007 and was one of the highest rated special of the year. Prior to that, “Here’s Your Sign, Live,” was aired on Comedy Central on August 1, 2004 and premiered to 3.6 million total viewers. The DVD of that special has been certified multi-platinum.

Bill is also a platinum recording artist. His first album, “HERE’S YOUR SIGN” (Warner Bros. May Â‘96), has been certified platinum and held the #1 position on the Billboard Comedy Chart for 15 straight weeks. It went on to peak at #5 on Billboard’s Current Country Album Chart and reached the Top 50 on Billboard’s Top 200 Album Chart.

Collaborating with musician Travis Tritt on a video also entitled, “HERE’S YOUR SIGN,” Bill became a fixture on the play lists of CMT and TNN. The single of the same name became the most requested single on country radio. It was ranked #1 on Billboard’s Country Singles Sales Chart for ten weeks and reached the Top 30 on the Billboard’s Singles Sales Chart, which covers all genres of music. The “HERE’S YOUR SIGN” single also achieved Gold status, not a common occurrence in the comedy market. In 1997, Engvall won the “Best Selling Comedy album” award at the annual NARM convention, outselling albums by Chris Rock and Adam Sandler.

Bill’s second CD, “DORKFISH” (Warner Bros., October ‘98), was certified gold (500,000 copies), and had the honor of being ranked #1 on Billboard’s Comedy Chart, surpassing Jerry Seinfeld’s album. All of his following comedy album releases debuted at #1 on the Billboard Comedy Chart, including his latest release “15° Off Cool.”

Bill has also written several books, including his autobiography “Bill Engvall Â–Just A Guy” from St. Martin’s Press on May 15, 2007.