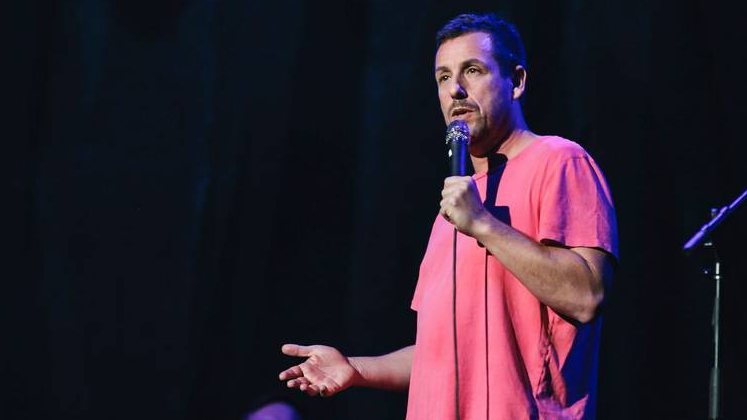 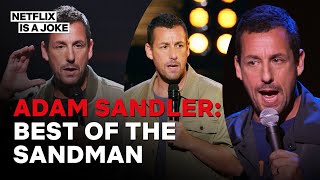 15 Minutes of Adam Sandler: Best of The Sandman 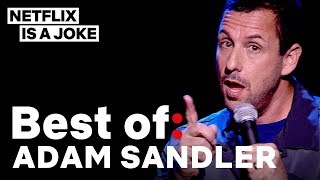 Best of: Adam Sandler | Netflix Is A Joke 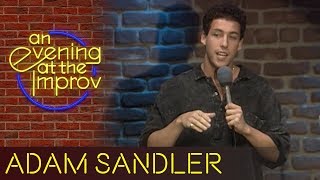 Adam Sandler - Early Standup Comedy on An Evening at the Improv (Try not to laugh!)

One of the most peculiar apparitions on “Saturday Night Live” was Adam Sandler, a tall geek with short-cropped hair and the woefully sulky face of a perpetually bullied loser.

He seemed to enjoy playing “pity me” parts, adopting a babyish, almost retarded voice that seemed stuck so deeply in his gullet it couldn’t be removed with a spoon—and that his classmates had tried.

The flip side to Sandler’s character was that, like many a school spaz, when given the chance to shine, he did little more than annoy. Grabbing a guitar, Sandler would offer up inane ditties with what passed for an ingratiating, little-boy smile. The stupider the song, the more the laughs.

And so it was that the Jerry Lewis of the 90’s was born…and to the shock of many, Sandler left “Saturday Night Live” to become one of the comic heroes of Generation X. They couldn’t get enough of his class moron character…the brainless insults he hurled, the dorky things he did, the assinine songs he sang.

Ironically, the very parents who were chided for enjoying the reckless and destructive antics of Jerry Lewis, were now wondering what in the world their precious Max, Courtney, Brittany and taylor were doing chortling over Adam Sandler. Sandler, a young kid who seemed to have become an overnight success.

Actually, he pretty much was. Born in Brooklyn, raised in New Hampshire, Adam tried out at a Boston comedy club when he was just 17. A class clown type, he transferred his act easily to the stage, getting laughs by goofing around. He received his B.F.A. at New York University and journeyed back to Brooklyn where “The Cosby Show” was being taped. There he had the recurring role of young Theo Huxtable’s friend Smitty.

Dennis Miller saw him performing stand-up in Los Angeles and reccomended him to Lorne Michaels. Sandler joined “Saturday Night Live” in 1990 as a writer, then as a performer. As with most everyone on the show, Sandler’s job was to create a few characters and then repeat them in bludgeoning fashion until viewers surrendered with laughter.

He created “Canteen Boy,” the ultimate in lives-to-be-punched patheticness, and the monsterously grating “Opera Man,” who could only sing his observations ? the very essence of a 6 year-old’s idea of funny. And, like a 6 year-old, Sandler kept doing it over, and over, and over. Many critics singled him out for abuse, but his young fans were supporting him, pushing his 1993 debut comedy album into the Top 100. His next audio assault came with the cutesy “Hanukkah Song,” filled with deliberately bad rhymes and chiding wit: “David Lee Roth lights the menorah, so do James Caan, Kirk Douglas and the late Dinah Shor-ah.”

If the idea of the dead Miss Shore lighting a menorah wasn’t hilarious to visualize, Sandler quickly moved on to films where he could spend 90 minutes sticking his own mug on display. Sandler’s debut starring film, “Billy Madison,” led him to leave “Saturday Night Live” in 1995 and concentrate on more movies. He scored another hit with “Happy Gilmore” and his next starring film, “The Wedding Singer,” grossed $39 million on its first weekend in release. He duplicated that feat with “Big Daddy.”