Tim Key warns the audience fairly early on in his show that it will be more of a poetry recital than comedy show. If you have a low bent for experimental comedy than you might just characterize more as dicking around. But Key’s show constantly reframes what it is, bringing in, yes, poetry, but also odd short-films, list of animals, asides to the audience and a bit of child-like play (as opposed to childish play). TIm Key tells us early on that the title “Slutcracker” is a misnomer, but there isn’t a “nomer” for this. “Slutcracker” is as good as any. 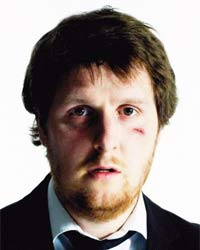 A lot of Key’s poems are playing with perceptions, pulling back and delivering that last bit of information that reframes all that came before. (Key also challenges the characterization that they’re deliberately bad, stating “They’re not deliberate.”) A lot of it is engaged with the audience, poems being interrupted by Key’s own observation that a line is “quite lovely, idn’t it?”

Key also likes to play a man unaware of universal knowledge and customs, asking the Canadian audience if they have Shakespeare or kissing. Not seeing his Edinburgh performances, I can’t say it’s a new bit of business but it’s really fun bit of play. Key knows how to coax audience to go along with his nonsense, having once member being responsible for bringing him his beer when he wants it, rather than leaving next to him on the stage.

This audience engagement is best realized at the end, when he challenges audience members to help him go from just off stage to the top of the refrigerator on the opposite side, requiring stepping in a haphazardly-placed baked goods, a bit of pushing in places below the lower back and finally being carried by as many audience members as he can force on stage.

It’s all a bit of fun for Key, but he wants you to join in. And you should.

Commenting is not available in this channel entry.
Previous:
Tom Wrigglesworth’s Open Return Letter to Richard Branson
Next:
Jamie Kilstein: No War, No God, No Nickelback