Jamie Kilstein: No War, No God, No Nickelback

I caught Jamie Kilstein’s show on Thursday. And wish I hadn’t. I wish I had waited ‘til tonight. I’ll explain in a bit.

KIlstein has a point of view politically and is just not built in a way that he can’t express it. And he does, punctuating points of his rants with a stamp of his foot, emphasizing things like the insanity of religious doctrine where a Fundamentalist Christian sect can demonize something as wonderful and human as hugs. They’re amazingly delivered seemingly without pause - Kilstein’s lung power must be incredible - and often end with audience applause, not just from the physical feat but from agreement of a political view that seems rarely heard when media cameras appear to unfailingly air the dissents finding right-wing organizations. 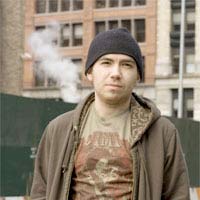 Kilstein is preachy. And there’s no reason why he shouldn’t be. He believes in something, a trait still too rare in comedians, and he should do what he feels like to get heard. But he said something late in his show that made we wonder. At one point, he stated (paraphrasing) “I realize if I pause, you laugh. And you don’t hate me.” It made me think that perhaps a slow roll of a rant would allow him to hit those jokes more (which are there already), that he could sneak more of his ideas in minds behind the cover of funny. That could be wrong. Maybe they’d cover the points too much.

The best part of the show for me was near the end, when Kilstein talked about the relationship with his father and his realization that he was probably the instigator of most of the distance between the two. It was a look at Kilstein as a person more, as someone questioning himself - in somewhat of an opposition that came before, which is full on angry young man at times. Not righteous but certain of the “wrongeous” of other groups. His coincidentally disastrous attempt to fix that relationship is a hilarious story where he ends up accidentally doing the things he wanted to apologize for is amazingly human and real.

Early in the show, Kilstein revealed his father was coming to the show on Saturday night, driving up from New York after hearing how important it was. The questioning that come from his realization about his dad might tinge the whole show. It’ll likely be an amazingly awkward evening for Kilstein, perhaps coloring the rants early in the show. It’ll be an interesting night. Sorry I’m gonna miss it.

Jamie Kilstein is a Bill Hicks wanna be.  Only Bill had amazing talent & Jamie just steps on stage to hear himself talk.  He’s a half ass comic at best, I’m not sure even sure why Dead-Frog wasted a post to talk about him when there are SO MANY TALENTED comedians who deserve to be discussed in a comedy blog.

Sounds like a great comic and an even greater show. I’d love to see a comic that raw that could pull it off. Maybe this article doesn’t do him justice, but he doesn’t sound like he pulls it off all that well himself.

I don’t really like preachy comics.  I understand when you are trying to find the humor in a situation or when you point out a societal flaw that is humorous but just preaching your opinion is not comedy, it just sounds whiney.  I prefer to stick to old-school comedy that rocks the foundation of society.  Carlin and Pryor did this best.

I disagree with both of you. Jaime actually makes a point w/ his stand-up, something that’s become sadly missing w/ a lot of the top tier comedians these days. Sure, Daniel Tosh, Louis CK, & Jim Gaffigan are all funny & make my genuinely laugh, but we need more comics who attempt to be relevant in some other sense. We need more Doug Stanhopes & Jaime Kilsteins…

As far as Jaime Kilstein’s delivery style goes, I think it’s really interesting the way he was able to bring his experience as a slam poet into his material & pull it off deftly & w/ aplomb.

killstein is an overwrought, overexposed turd sandwich with a boring derivative “point-of-view”, and over-inflated sense of self-worth juxtaposed against a flat miasma of droning pseudo-intellectual claptrap that is as about as ingratiating as fingernails against a blackboard! in the end, he’s a simpering, whining little girl who probably lashes out at the world because “daddy” didn’t throw a ball at him enough….I’m sick of human flotsam like this parading itself around like some kind of “authority” on anything beyond scraping bird bowel movements off of a window sill - back to the bland monotony of the bible-thumping midwest for little jaime!!

I absolutely cannot stand preachy comedians unless they are being preachy about why people should not preach! Lol, honestly I’m only commenting on this blog because it’s an assignment for school. This is a great blog though and I find it helpful to read through many different blogs to see how they are all so differently written!

I saw this guy’s act.  While it wasn’t bad and his political opinions I all agree with, it just wasn’t really funny, it seemed like he was trying to get the crowd to applaud rather than laugh.  Seemed kind of pandering.  He had one really long joke about gay people having kids and the punch line (which took forever to get to) was almost word for word something Dan Savage said years ago.  He’s kind of funny and a likable guy, but expect to clap, not laugh.

That’s the point you’re missing. That “really long joke” about gay people adopting children has a number of really great tags with laughing points, but he bulldozers over it on purpose—it’s for effect. It’s slam poetry, and if you’re not familiar with it, look it up. The momentum makes the joke funny & memorable.

I just admire the fact that he’s bringing something new to the table.  And to “norbert fensterblau” how is he “overwrought” & “overexposed”? Most people have never heard of him. He’s a plain, unassuming guy with an astonishingly sharp mind.

“Juxtapose”, “miasma”, “droning”, “claptrap”, “ingratiating”, “simpering”, “flotsam” ... what are you reading a thesaurus or something? You’re probably some freshman in college trying to throw around words you just learned on your placement test-prep class last year. Way to chime in with a pompous-sounding, douche bag comment.

Commenting is not available in this channel entry.
Previous:
Tim Key: Slutcracker
Next:
Donald Glover: Gross