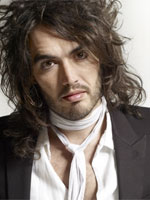 Well, no one could say Russell Brand didn’t try.

Last Wednesday, he work-shopped some material for hosting MTV’s Video Music Awards at “The Green Room” on Bleeker Street. Brand had hosted the show last year as well, but the crowd didn’t know what to make of his jokes about the Jonas Brothers and their promise rings. It was enough of a debacle that Brand spent a fair amount of his first United States comedy special talking about it. Good fodder for one show, but I’m sure he’d rather talk about something else in a second U.S. special.

The first thing you would notice about the impromptu show was the female/male ratio of the crowd. It tipped about 80/20. Brand’s lusty persona has a hold that’s really rare in the comedy world. I can’t remember the last comedy show where the opposite sex from my own was so strongly represented.

Brand framed the evening for the audience, but first realized he was a bit hungry and bemoaned he left behind a banana backstage. No worries however, an audience banana is quickly produced and in between mouthfuls, Brand told us how he wanted this year’s stint as the VMA’s master of ceremonies to go much better, specifically a desire to avoid “death threats.” So he was gong to try his material out on us. We were heavily encouraged to raise our hands if we believe Brand was nearing territory which would make him a target for more than a joke.

Hand-raising was the least of the contribution Brand sought from the audience. The audience acted like a writer’s room at times for Brand, offering punch-up for bits. Sometimes it was just a word - don’t say “Fuck”, say “Nail.” A long diversion occurred about what word to use for asshole. (“Orifice” - not specific.)

But a few times it was a bit more. One in the crowd had a reaction to the tail end of the joke, and Brand immediately earnestly question that didn’t he have to have a third thing, citing comedy’s “rule of three.” It was a generous assumption that the audience would know what he was talking about.

Brand might have been too generous. Brand at one point elicited suggestion for a bizarre thing he could suggest Pink might do in her performance. A voice from behind me yelled, “Pink comes out and fucks Michael Jackson’s corpse.” Thankfully, lost in the din of other suggestions.

Another joke about P. Diddy and Jennifer Lopez elicited a response that it should be about P. Diddy’s current girlfriend. Russell Brand made a good observation that true for constructing all monologue jokes, stating that “a fact that nobody knows, it’s almost like it’s it’s not a fact.”

A variation of this is also a lesson for Brand, which, after watching his parts of the VMAs, I think he’s unfortunately had to learn twice. Brand’s obsessive sexual persona is great for his stand-up, but it’s still so unknown on these shores that people just wonder “why is this British guy is saying dirty stuff about our pop-stars?” If the jokes rely a bit on who you are, and you’re still relatively unknown, then no one is going to get your jokes. Brand knows this, he even said so much in that aforementioned first US special.

I think the VMAs are a terrible place to try and be funny anyway. Just like the Oscars, the audience is full of music folks taken a relatively meaningless awards far too seriously (see Kanye). The best reaction you’re going to manage is clapter - the clapping for a political point of agreement- not laughs. Brand’s best moment was when he referred to Britain having free healthcare, and it was more of a statement than a joke. (It was a popular line the night he was working out material as well. And wasn’t part of his initial monologue. No wonder he moved it up.)

And Brand’s talent is two fold, the second being something that’s could never be part of the VMAs but was part of the show I saw. He’s more than just a prancing pervert, but dares into metaphysical stream-of-consciousness, where he imagines that we’re all connected backwards to prior generations and each other by umbilical cords, suggesting that as a reason to cast a kinder eye at celebrity. His mind ventures in places that MTV just doesn’t cover unless it’s pretentiously shown in a rarely aired music video. I can’t imagine MTV offering the VMAs again, but if they do, hopefully, Brand won’t try and make the third time the charm.

Brand (and arguably Izzard before him) has appeal in the US, however I suspect it may be limited. Some things just don’t translate that well. In the same way that Seinfeld was massive in the states, but just ‘shown’ on UK TV (unlike Fraser & Friends, which were both massive). In the same way that Monty Python was big in Germany & the US (although I sometimes suspect that Germans didn’t really understand why they liked Python).

You´ve written “some `get it´ and some just don´t”. I agree with that. There are differents between english and american culture even though the languages are (nearly) the same. As a German/French/Italian/etc you´ve more chances to understand a british joke and/or wordplay. It´s a kind of european humour.

As an European I like american comedians also but have problems with that - sorry! - terrible slang. For me it´s sounds like someone has tons of chewing gum in mouth whilst speaking. Well, I learned `british´ english in school.

I guess European humor can sometimes be similar (French & British humor are not a million miles apart), however my experiences of living in Germany showed me something quite different. Both German & American friends have told me how much they love British humor, citing both Monty Python & Benny Hill as examples. Now, don’t get me wrong, Benny Hill has its market, but from my perspective you cannot utter them in the same sentence, as they are at opposite ends of the scale. MP is obviously high-end intellectual comedy, whereas Benny Hill is sexual innuendo & slapstick. Personally, the latter doesn’t appeal to me in any way whatsoever. Someone falling on their backside is just not funny to me - laughing at other people’s misfortune just seems cruel.

I can remember instances in Germany where we would be watching Monty Python with friends and the Germans in the room would be laughing, but you would sometimes get the occasional query as to why something was funny. The translations were also not accurate - I remember the subtitles once translating “Three piece suite” as Drei-Teil-Anzug. I guess suit and suite appear similar to someone having to translate large volumes of text, however with the image of a sofa on the screen, I guess it would lead to a certain degree of confusion.

lol about the (see Kanye)...yeah Brand is sort of funny…but def not a VMA host.

Commenting is not available in this channel entry.
Previous:
Jon Stewart’s Refined Talk or “You Slam Tucker Carlson Once…”
Next:
Interview: David Cross, Stand-Up and Author, “I Drink For a Reason”