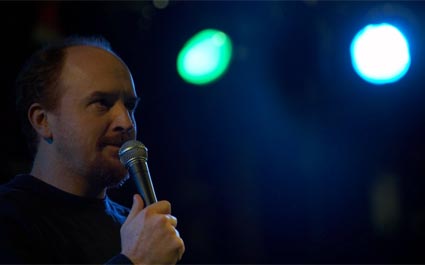 Horatio Sanz had to bow out of his featured performance at the 2007 Dirty South Improv festival for health reasons less than a day before the showtime. It’s unclear what exactly was affecting Horatio’s health, but a post on the comedy message board A Special Thing mentions that he did go to the hospital. Whatever the case, I definitely hope he is well or on the mend. If I find out anything else, I’ll post it here.

Louis CK apparently stepped in on short notice and flew down Friday to Carrboro, North Carolina to fill Sanz’s slot. According to that same post, it was an incredible performance - much of it new and already apparently quite strong despite him recently completing an HBO special at the end of last year, effectively retiring that material. I’ve heard Louis CK describe how he’s been following Chris Rock‘s model of treating the shows between specials like training for prize fights. If Louis C.K. can maintain the high bar he set in his special Shameless, he and Chris are on to something. If there’s a model for how to pursue being a comic right now it’s him.

Reader Jason Curtis sent along the heads up on a very nice gallery by photograher Kevin Thom of DSI which includes photos of Louis CK (including the one seen above). Check them out.

Louis CK was also at Stand Up NY on Monday night. It was a bringer show and most people there didn’t know who he was. He did about 10 minutes and it was great. Topics included a a fight with his wife about taking out the trash, how having kids makes you understand how someone could put their kid in a garbage can, why he likes women more than girls, etc.

Commenting is not available in this channel entry.
Previous:
The Mr. Show Theme and Other Things that Make Me Drool (Metaphorically)
Next:
Joe Rogan Confronts Carlos Mencia on Stealing Jokes