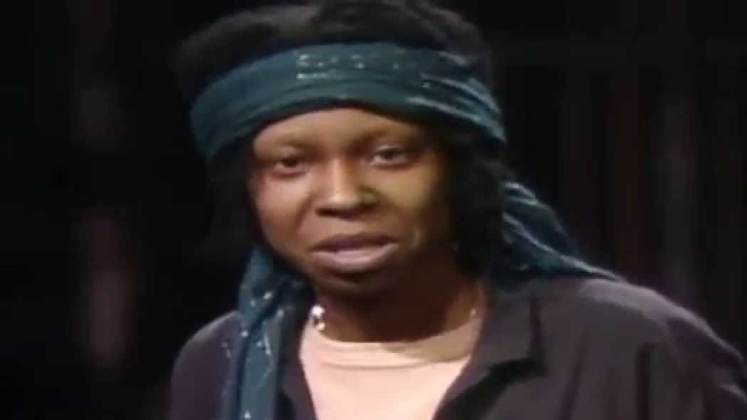 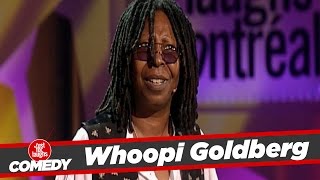 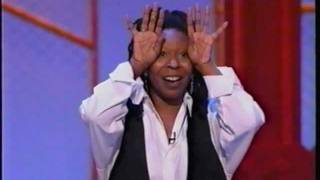 When the name “Whoopi Goldberg” was suddenly flashed on a Broadway marquee in October of 1984, most people had the same reaction as Robin Williams. The name sounded, he said, “like the Hasidic inventor of artificial flatulence in a bag.” Who was this Jewish boy with the comical first name, how come he was getting his own show when nobody’d ever heard of him, and was he funny?

Soon enough critics supplied the answer: Whoopi was a black female performance artist with a talent for imitating everyone from Valley Girls to down-and-out bums. Her stark monologues recalled Lily Tomlin, but with a streetwise edge, a lot of four-letter words, and uncompromising pathos. One monologue was about a dumb “surfer chick” who made audiences laugh as she recounted her sexual experiences and naivete—then drew shocked silence as she described how she used a coat hanger to abort her pregnancy: “I’m not gonna be able to have kids.. you can’t drag babies around…besides, I’m turning 14 next week. I’ve got my whole life ahead of me…”

Goldberg tried to retain the aura of mystery surrounding her, but after her Broadway show, record album and cable special were all hits, reporters found out her real name. Caryn Johnson grew up in a Manhattan project: 288 Tenth Avenue in the Chelsea district near West 26th Street. She attended Washington Irving High School and began performing at the Hudson Guild Community Center. She left for the Coast to join repertory theaters while taking odd jobs like bricklayer and mortuary beautician: “When you work in a beauty parlor, you can’t talk back and you can’t talk mean. But with dead people you can tell ‘em how you really feel: “I’m glad you’re dead. I think you’re a bitch.’ You can grab their head and go, “Hey come on, Sit up here. Let’s try the Joan Crawford look on you. Nah, that doesn’t work. Let’s try Lucille Ball.” As for her stage name, that remained a mystery: “My mother suggested it. I’ve asked her why, but she’s even more private than I am. All she will say is ‘Because it’s ours.’”

Goldberg worked in San Diego and then Berkeley in 1981. She loved avant-garde theater, “a haven, a sanctuary for expressing thoughts that could get you arrested or taken to Bellevue.” She was discovered by Mike Nichols after her one-woman “Spook Show” on the Coast and brought to Broadway. She seemed like an “overnight” sensation and the Broadway elite embraced her. Well-heeled liberal audiences were eager to pay an expensive Broadway ticket price to see her. The characters Goldberg threw at these out of touch, guilty people shamed them and demanded their attention. Vanity Fair ran an article on her and asked about her inspirations. She mentioned Moms Mabley and Lenny Bruce: “if I have to shake my tits or play somebody’s fucking maid for the rest of my life, it isn’t worth it…Moms and Lenny are leading me. Moms and Lenny are saying, “Do it. It’s going to piss a lot of people off.”

Paul Simon visited her during her Broadway run and offered three words of advice: “Please—enjoy this.” Despite her veneer of anger and angst, she admitted to heeding the words and making sure to have fun at big Hollywood parties and let loose. Another star, Joan Rivers, was concerned about her scruffy wardrobe and begged her to try wearing a dress once in a while. Goldberg answered, “If somebody’s really interested, they’ll look beyond the first layers…if they’re lucky enough to last till I get out of my clothes, they’ll get a big surprise.” Joan asked, “Is your underwear sexy?” Whoopi nodded. “Yes! And tasty, too.”

Whoopi went from Broadway to the prestigious film “The Color Purple.” Unfortunately Her next films were box office disappointments. When she continued to be cast in film after film, Sam Kinison cracked, “an entire country is afraid to hurt one woman’s feelings!” Goldberg never duplicated the stand-up success of her one-woman show. As the homeless and the distressed began to fester in the urban streets, many of them looking and acting like Whoopi, the novelty began to wear off. Her reliance on the dialect of an uppity street-corner black, in both her stand-up and film roles, began to seem more and more of a cliche. Even her trademark dredlocks were annoying. In 1988 Esquire called her “sanctimonious” and urged her to “Get a haircut. Get serious.” Goldberg sent them a reply: “Gotta haircut. Got your magazine and (used it as toilet tissue). Love, the Sanctimonious Whoop.” In 1990 Spy referred to her simply as a “humorless comedienne.” One reason was probably the edginess in her humor: unlike Robin Williams or Billy Crystal, her frequent “Comic Relief” co-stars, Goldberg rarely seemed to make the audience laugh from pure joy and silliness. There was always the edge of playing a character hostile and at odds with the audience, or the edge of satire with a bitter message to teach. This was surprising considering her natural talent for clowning—and the cute tattoo of the “Peanuts” comic strip bird Woodstock on her left breast.

Reviewing “Homer and Eddie,” yet another box office bomb, the New York Post’s critic wrote, “At least Goldberg didn’t have to do anything to her hair to play a vagrant,” and questioned “her acting talents, such as they are assumed to be.” People, commenting on a 1990 HBO special, added “those wondering just what it is that Whoopi Goldberg does to warrent her celebrity will be further mystified…”

A regular on “Comic Relief” TV broadcasts, capable of showing both the same sentimentality of co-host Billy Crystal and the frantic sensitivity of other co-host Robin Williams, Goldberg seemed to frustrate fans and critics who saw so much talent so wasted. She tred familiar ground as the obstreperous, independent owner of TV’s “Bagdad Cafe,” feuding but ultimately befriending co-star Jean Stapleton. “Am I disturbing you?” asks Jean. “Too late,” growls Goldberg. “I’m already disturbed.” Evidently disturbed by weekly sitcom work, Goldberg had enough very quickly and the show mysteriously disappeared from the CBS schedule. It was another dead end, following a series of movie bombs. She shrugged off her string of failures: “If people are disappointed in my films, that’s a shame, because I’ve had a great time…I’m pleased I’m still around…I live at the beach, I drive a Sterling. I’m a happy woman…My philosophy has always been to do pretty much damn well what I want. And if I can be funny I’d like to explore that and if I can be serious I’d like to explore that and I suppose it’s good to do both.”

At this, the nadir in her career, The New York Times declared, “If she were a savings and loan, the government would have taken her over by now. She’s had nothing but failures since “The Color Purple.” But Goldberg once again managed to get a movie role. Once again it required a lot of jiving and huffy street corner sass. But “Ghost” also required an actress with enough talent to make up for the rest of the cast. And suddenly, Whoopi had a box office hit. As she put it, “I didn’t know my career was so far down the toilet until I read the reviews for “Ghost!” Her comeback was complete when she won an Academy Award for Best Supporting Actress. It was the first time a black actress won that prize in over fifty years. Hattie McDaniel had been honored for “Gone With the Wind.”