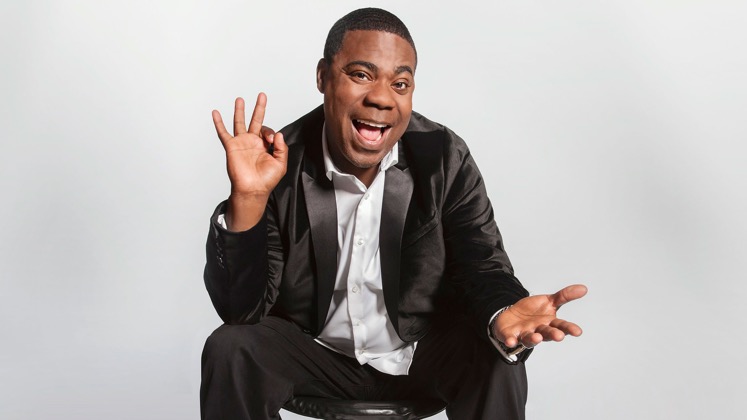 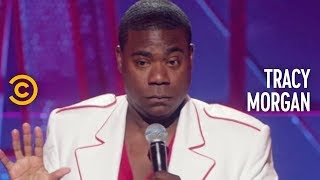 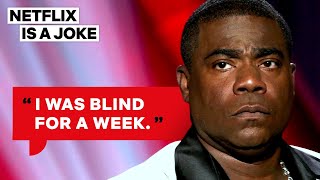 Tracy Morgan Describes His Different Injuries | Netflix Is A Joke 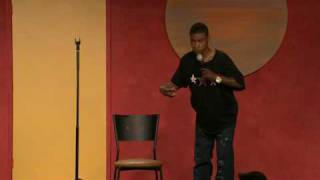 Tracy Morgan - Stay Off The Coke (stand up comedy pt.6)

With a trio of films on the way, two in production and a hit television series, Tracy Morgan has been an extremely busy man as of late. He is filming the Screen Gems comedy “Death at a Funeral,” a remake of the 2007 British movie of the same name, alongside Chris Rock and Martin Lawrence. He will next be heard lending his voice to two animated movies: Disney and Jerry Bruckheimer Films’ “G-Force” and Sony Pictures Animation’s “Cloudy with a Chance of Meatballs.” In “G-Force,” a combination live action/CG film, Morgan’s stars as “Blaster,” one of the highly trained secret agent guinea pigs dispatched to save the world, opposite Penelope Cruz, Nicholas Cage and Steve Buscemi. Inspired by the beloved children’s book, “Cloudy with a Chance of Meatballs” tells the story of a town where food falls from the sky like rain. Morgan lends his voice alongside Anna Faris and Andy Samberg.

Morgan can currently be seen starring on NBC’s two-time Emmy and Golden Globe Award-winning “30 Rock.” He stars opposite Tina Fey and Alec Baldwin as “Tracy Jordan,” the unpredictable star of Liz Lemon’s (Fey) hit variety show, “TGS with Tracy Jordan.” Morgan has twice been nominated for the NAACP Image Award for his role. Along with the cast, Morgan also has won a 2009 Screen Actors Guild Award for “Outstanding Performance by an Ensemble in a Comedy Series.”

Morgan will also star alongside Bruce Willis in the Warner Bros Pictures’ film “A Couple of Dicks,” a comedy about two cops whose adventures include locating a stolen baseball card, rescuing a woman and dealing with gangsters and their laundered money. He will also be seen in the David O. Russell (“I Heart Huckabees”) romantic comedy “Nailed,” opposite Jake Gyllenhaal and Jessica Biel. Morgan’s other feature film credits include: Dimension Films’ “Superhero Movie,” “First Sunday” opposite Ice Cube and Katt Williams, “The Longest Yard” opposite Adam Sandler, the Wayan’s brothers “Little Man,” “Jay and Silent Bob Strike Back” and “Head of State.”

As a stand-up comic who has headlined across the country, Morgan was first introduced to television audiences in his role as “Hustleman” on the hit comedy series “Martin.” He went on in 1996 to join “Saturday Night Live,” where he appeared for seven seasons and created such memorable characters as “Astronaut Jones” and “Brian Fellow.” After leaving SNL, Morgan went on to star in his own comedy series “The Tracy Morgan Show” and as the voice of “Spoonie Luv” on Comedy Central’s “Crank Yankers.”
Morgan currently resides in New York City.