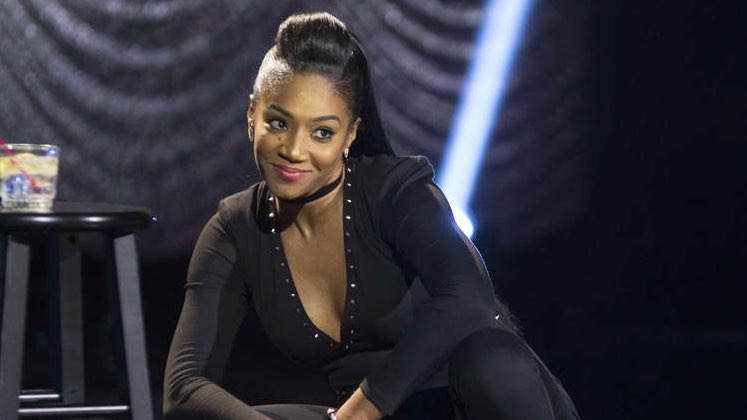 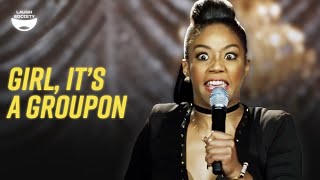 The Best Of: Tiffany Haddish 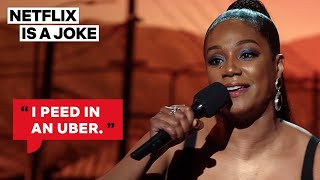 Tiffany Haddish Partied Too Hard In Miami | Netflix Is A Joke 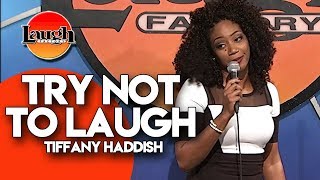 When Tiffany Haddish walks into a room you know she is someone not to be reckoned with.  In a mere few minutes you will be laughing so hard you will be crying, and then you might even cry when you hear how she got to this phenomenal point in her journey both on and off stage.

It is a testament that the one person she credits her success to is her social worker which in itself says it all. Growing up in foster care in South Central Los Angeles, it was her excessive talking and imaginary friends that prompted her increasingly flustered social worker to steer her into standup comedy by enrolling her into the Laugh Factory Comedy Camp for children. When she returned and was placed with a white family in the valley, she thought her new classmates, who were also Caucasian, were celebrities from television. She even asked them for their autograph.  Growing up in South Central, the only race of people she saw on television were white.

Next year, Haddish returns to her co-starring role on the NBC comedy The Carmichael Show, alongside the show’s creator and star, Jerrod Carmichael.  Tiffany “Nakeisha,” the outspoken, no-nonsense character.  The Carmichael Show premiered earlier this year to rave reviews and was the most-watched summer comedy on the Big 4 networks over the past eight years, capturing 4.7 million viewers. In addition, she will star alongside Keegan-Michael Key, Jordan Peele and Nia Long in the feature film, Keanu, set for a April 22nd 2016 release.  Tiffany also has a recurring role on the Tyler Perry’s soap opera, “If Loving You Is Wrong,” an OWN series.

Today, Tiffany tours all over the world bringing her edge, unusual take on life and love and tons of laughter, introducing herself by announcing “She Ready” & “The Last Black Unicorn”. Haddish’s comedy has landed her on Jenny McCarthy’s Dirty Sexy Funny comedy tour. She has made appearances on the Tonight Show, Chelsea Lately and the Arsenio Hall Show. Haddish was an early stand out since appearing on HBO’s Def Comedy Jam, Bill Bellamy’s Who’s Got Jokes? for TV One and on Comedy Central’s Reality Bites.

Not only is she a comedian, she has proven to be an unparalleled actress appearing in such diverse projects as the film comedy Meet the Spartans and the Lifetime drama Racing for Time, where she played a lead role opposite Charles S. Dutton and opposite Ice Cube in The Janky Promoters. Haddish debuted as Denise, a drug abusing woman dealing with social issues on Lifetime’s Racing for Time. Her television credits include Kevin Hart’s BET show Real Husbands of Hollywood and FOX’s New Girl.
Tiffany’s comedy has given her a platform to travel the world. She recently returned from performing on the USO Comedy Tour in Japan for United States troops. She is always touring various comedy clubs and colleges across the country.  One of her special passions is performing in a comedy show Chuckles Not Knuckles, a program she developed for inner city high school students that promotes nonviolence.

Haddish sees herself as sexy as Halle Berry, as funny as Jim Carrey, raw like Richard Pryor with the comedic timing of Lucille Ball, smooth like Eddie Murphy, Jewish as Whoopi Goldberg, and hopes to someday have money like Oprah.