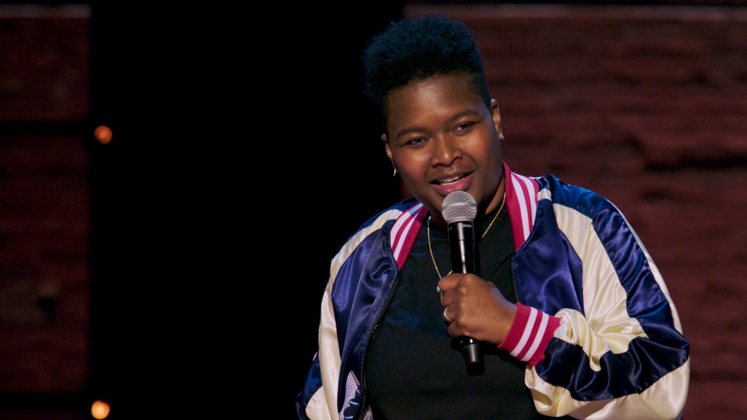 Sam Jay is an emerging stand up comedian, actress, and speaker who hones her skills on the Boston comedy scene. Now a resident of Los Angeles, Sam is considered one of the industry’s hottest up-and-coming talents and she was selected as one of Comedy Central’s Comics To Watch in 2015. In addition to headlining some of the best comedy festival across the country, Sam is the star of Viceland’s new TV series ‘Flop House.’ As a queer woman of color, Sam is breaking ground in comedy every day.

When asked how long she has been doing comedy Samaria Sam Jay Johnson smiles and replies ‘For as long as I could speak’. Hailing from Boston MA a city that is no stranger to comedic prowess; a place that can lay claim to the comedic talents of Jay Leno, Louis C.K., Conan O’Brien and many others, Sam Jay is setting her own stage. Some would say the fact that she’s female, African American, and a lesbian has allowed her to stand out in a male dominated industry. But it is more so how she can take these experiences and make them not only funny but relatable. Witty, candid, and raw she is bringing about a brand of comedy that has yet to be seen. Provoking audiences by pushing their thinking while still giving her sets the feel of a barroom conversation with one of your funniest friends. Her familiar personality on and off stage has allowed her to build quite the buzz in and around Boston comedy circles. Her 2013 invite to Laugh Your Asheville Off Comedy Festival and her 2014 acceptance into the Women In Comedy Festival as well as a stellar performance at the auditions for BET Comic View return to TV has got the industry insiders buzzing about this young lady. Opening for power house/veteran acts like Joe Clair BET, Hannibal Burres Comedy Central, and Rob StapletonComedy Central has not only helped this rising star hone her skills but has allowed her to branch out booking shows up and down the east coast. Performing at comedic institutions like Gotham NYC to the Comedy Studio in Cambridge Ma. Sam Johnson is wowing audiences and building her fan base. Her fresh, unique and warm approach makes Sam Jay a comedian worth seeing and one you will be talking about long after you do.