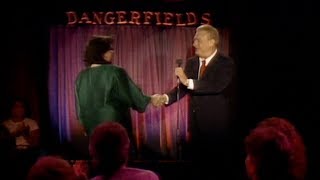 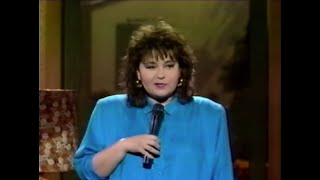 At the height of her fame, gossip columnist Liz Smith asked: “Roseanne: Slob or role model?” Not since Carroll O’Connor’s “Archie Bunker” had the American public simultaneously embraced—and been repulsed—by the star of a #1 sitcom. Archie Bunker did it via racism. Roseanne did it via gluttony, arrogance and sloth.

Born in Salt Lake City, Roseanne’s tumultuous childhood began with facial paralysis from Bell’s palsy at three and a fall at five that knocked her teeth through her lip requiring an hour and a half of surgery. She was victimized by relatives and friends. She recalled of her childhood “I was abused in every way you could be abused.” One of the worst symptoms of her enduring traumas was her habit, only abated in the 1990’s, of cutting and picking at herself till she bled.

Emotionally she was paralyzed by being Jewish in a Mormon city. She called the Mormons “The Nazi Amish” and said they tormented her and beat up her brother. Her mother’s compromise of having Roseanne study both religions only left the young girl confused. At 16 Roseanne was hit by a car and was in a coma for days, her legs requiring plastic surgery. Bedeviled with nightmares after that, she was ultimately placed in Utah State Hospital for eight months of psychiatric therapy. Her mother recalled “Life was not easy for Roseanne. It wasn’t easy for me, either, because I’d never met anyone like her.”

In May of 1971, Roseanne had a child at a Salvation Army home for unwed mothers. The child was given over for adoption. She married in 1974, living with her husband Bill Pentland and her three kids in a trailer in Denver. A housewife and part-time cocktail waitress, her first attempt at comedy came when she read some material over the phone to radio talk host Alan Berg. “I actually peed my pants because I was so scared,” she recalled.

In 1980 she tried stand-up comedy, toughening up to survive the bad nights of silence or jeers. (She worked throughout the decade under her maiden name, Rosanne Barr). She won the “Denver Laff-Off” in 1983 and moved out to the West Coast. Another fat woman, Totie Fields had shown guts on stage. Contemporary comic Judy Tenuta had success with put-down humor, calling herself “Goddess.” Columnists Peg Bracken and Erma Bombeck had both gotten laughs with caustic humor about housewives sick of their chores. Roseanne put these styles together, adding her own distinctive touches.

“I always had entertained folks that I knew with my bitching,” she recalled. So she bitched in a flat nasal voice. She tossed out nasty comments taken as jokes. On housework: “I figure by the time my husband comes home at night, if those kids are still alive, I’ve done my job.” On sex with her husband: “Like, I’m gonna turn off Wheel of Fortune for that?”

The bluntness was startling, the shock produced laughter. She made it to “The Tonight Show” in August of 1985, again in November, and by 1987 starred in her own HBO special. The following year her sitcom became an unexpected Top Ten hit. Blue collar viewers responded strongly to Roseanne’s self-described attempt at becoming the female Ralph Kramden. Her humor consisted mostly of sarcastic grumbling. When a kid on the show cried, “Mom, I’ve got a knot in my shoe,” her answer was: “Wear loafers.” But there was enough warmth coming from her co-star John Goodman (playing her husband) to balance the cheap shots. The Daily News decided “the real star of “Roseanne” is John Goodman and everyone knows it.” TV Guide agreed he was “Roseanne’s beefy better half—and the best explanation for this show’s runaway success.” His good humor would eventually help steer Arnold toward a more realistic and less biting performance.

Roseanne’s difficult personality, her insecurities as a star, and her lack of experience as an actress produced tensions on the set of her show. People were fired, people were hired—and Roseanne soon replaced Joan Rivers as the tabloid press’s favorite target. Her response was to flaunt her stardom and act even more obnoxious than she was. “I do offensive things,” she said. “Like I belch at the audience and swear and fart and stuff. That’s who I am. That’s my act.” She thumbed her nose at critics, shouting “You’re looking at one happy, fat bitch. I’m fat and I’m proud of it!”

Roseanne made tabloid headlines constantly in 1988 and 1989. She mooned her bare behind at the crowd at an Oakland A’s baseball game, one of her daughters required alcohol abuse treatment, and reporters discovered the daughter she’d given up for adoption before she could locate her. Her marriage broke up and her new husband was Bill Pentland’s best friend, chunky small-time stand up comic Tom Arnold. Arnold then made headlines for his cocaine abuse and treatment. Tom and Roseanne tattooed each other’s name on their butts and conducted interviews together, chortling over their habit of making love noisily in unlikely places. They were not perceived as a “class couple,” and the public’s love/hate of Roseanne now extended to her pugnacious hubby who dominated interviews with bright-eyed cheerleading and sweaty defenses of Roseanne’s antics. Columnist Marilyn Beck wrote “I’ve been absolutely swamped with letters from readers who feel Roseanne should be crowned The Tackiest of ‘89.”

1990 proved even tackier. Roseanne’s variety of controversies ranged from mildly nauseating (her “Vanity Fair” photo shoot frolicking in a bathing suit and beach mud) to tastlessly foolish (an ear-splitting rendition of “The Star Spangled Banner” at a July 25th San Diego Padres game that included her spitting and grabbing her crotch in parody of baseball player vulgarity). The latter even provoked the ire of President Bush who called the incident “disgraceful.” Roseanne later declared she was censured “because I’m a woman making fun of men.” When the latest executive producer on Roseanne’s show, Jeff Harris, tried to limit Tom Arnold’s influence in dictating script changes, Tom tried to strangle him. As Roseanne recalled, “After he strangled him, I said ‘you have a slight problem. You think this is a democracy. It’s not. It’s a Queendom. You’re outta here.” For simple star vs star controversy there was Roseanne, inflamed over Arsenio Hall’s fat jokes, declaring “Arsenio Hall is America’s first black nerd…a triangle-headed Eddie Murphy lookalike mother…”

Roseanne’s 1989 autobiography was roasted by book reviewers and her first film, “She Devil” was treated to similar hellfire. As she often did, Roseanne hid behind feminist philosophy when it came to accepting blame for failure. The problem, she insisted, was that men couldn’t deal with a movie featuring strong female characters: “Our movie depicts strong bitchy women who don’t just sit around. And no, I don’t think they are too bitchy. Women can never be too bitchy!” She could think of only one solution: “I’m going to have to grow a penis.”

Roseanne’s 1990 HBO special was another embarrassing exercise in self-indulgence, poor taste and deliberate obnoxiousness (if critics disliked her off-key rendition of “The Star-Spangled Banner” she would get even by singing several songs, even worse, on the special). Her television series, however, continued to do well in the ratings. In 1990 she premiered a Saturday morning cartoon show called “Little Rosey,” based on her childhood years. Roseanne did have an attractive side, and could actually seem cute and almost cuddly at times. She could rightfully win an audience’s sympathy as she explained how a tabloid did more than simply “invent” a front page story declaring she was being investigated for child abuse—they set her up by phoning in the fake charge themselves. And when the tabloids hired an insider on Roseanne’s TV show to rifle through Tom’s briefcase and steal love letters for subsequent publication, the couple spent hundreds of thousands of dollars to sue—and win. They emerged on talk shows both looking thinner and healthier, and their comedy far less strident. But just to keep everyone off-balance, after a decade as “Roseanne Barr,” Roseanne emphatically began calling herself “Arnold,” a tribute to her husband who had converted to Judaism for their marriage. When there had been no major conflict for a few months, Roseanne suddenly remembered something. She declared she had been sexually molested, and said that she remembered such an experience at six months of age. Her parents took a lie detector test and passed it, her father declaring, “I never had any incestuous relationships with her and,” his voice breaking into sobs, “I don’t understand.”

Roseanne continued to confuse, outrage, amaze and amuse her fans and her foes, both with her private life and her stand-up and television comedy. As Carroll O’Connor demonstrated as Archie Bunker, it was possible to win laughs and affection even playing a character with obnoxious character flaws. Interviewed by David Letterman in November of 1990 she said, “I’m in therapy…all I can do is try and get better!” Many fans were rooting for her.