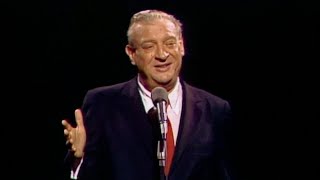 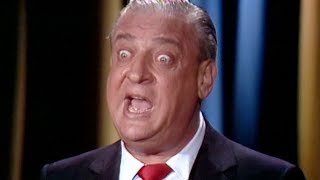 Rodney Dangerfield at the Top of His Game (1980) 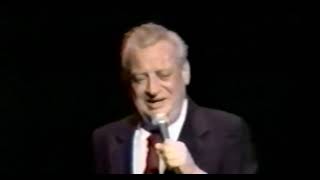 “I don’t get no respect,” Rodney Dangerfield complained. Good comedy springs from the truth. And this was the truth. Rodney looked like a loser. There were bags under his bulging eyes, his heavyset body weighed him down just getting to center stage, and sweat poured from him as he nervously adjusted loosened the tie that seemed more like a noose. He just couldn’t get a break. He said that whenever he went into an elevator, the operator said one word: “Basement?” And when he was a kid and played hide and go seek, it was no fun at all. “They wouldn’t even look for me!”

His miseries on stage were only a slightly cartooned version of his miseries off-stage. He had a rough childhood. His name back then was Jacob Cohen and he grew up tormented by anti-Semitism and the wistful longing to fit in with the crowd. His parents were separated and money was tight. The boy had to deliver groceries—to the houses of the kids he went to school with. “I wanted to date certain of the girls, but I never asked them. I felt I wasn’t good enough.” After graduating high school he drove a laundry truck.

Calling himself Jack Roy, he decided to follow his father (billed as Phil Roy) into show business: “Comedy is a camouflage for depression…a lot of people from split homes go into show business because they want applause…in my particular case, it was a question of: accept me, tell me I’m okay. Tell me I’m as good as the rest.” As a comic, he never earned more than $8,000 a year. Others seemed to go on to better things. He was a loser. And he had a wife and family to support. So he quit the business and became a salesman.

Hitting 40, writing a few jokes now and then for star comedians, he had a restless urge to give show business one last chance. Not wanting to come back as the failed Jack Roy, he needed a new name. A club owner thought up Rodney Dangerfield: “I was depressed enough to keep the name.” There were a few losers in stand-up, like Jackie Vernon, but Rodney became something different—a loser fighting to be a winner, grousing over every indignity, his “I don’t get no respect” coming out of anger more than self-pity. His one-liners bristled with chagrin and irony: “My wife’s an earth sign, I’m a water sign. Together we make mud…I broke up with my psychiatrist. One day I told him I had suicidal tendencies. He told me from now on I had to pay in advance.”

Through the 60’s and 70’s, Rodney’s gut-message hit home. Older fans sympathized with the guy who could never get a break. Younger fans seemed to see him as the personification of the American Dream gone wrong—but a guy hip enough to joke about it. A guy who knew what it was like to be an outsider, Rodney in the 70’s was well known for being nice to fans and encouraging to other comics. He was one of the few big names who gave novice joke writers a chance, always willing to look at new material and pay a decent price for a gag.

Dangerfield continued to work hard. He was invited back on “The Ed Sullivan Show” and Johnny Carson’s “Tonight Show” over and over because he was constantly turning over fresh, audience-tested, well-constructed jokes. Rodney’s fame continued to grow. He cut a “rap” record and video, had good luck with his own “Dangerfield’s” night club in New York, and after only a few film appearances, struck gold with the smash hit “Back to School.” He was suddenly one of the nation’s hottest comics. The film grossed 90 million dollars.

The loser was a winner. But, unfortunately true to his image, he told an interviewer, “It’s too late to do cartwheels.” Success had come too late and he could not hide his bitterness. Among his deepest regrets was that his long-time manager had died before his breakthrough film was released. Rodney’s pain and pessimism coupled with the awesome success seemed to throw him temporarily off balance.

With new management came a new look, a thick lawn of dyed blond-yellow hair. The new management felt that Rodney was worth more than the $5 million he was going to get for “Caddyshack II”—and the resulting lawsuit left him without the key follow-up film he needed. The new management refused interview requests—which only confirmed the suspicions of many that he was beginning to indulge to deeply in the joys of star power. The new management brought him to Broadway for a critically roasted one-man show. And under the new management he made a few vulgar and poorly scripted cable specials that had fans shaking their heads.

He filmed a pilot for “Where’s Rodney?” about a 12 year-old who asks Rodney for advice in times of crisis. Somehow, the concept didn’t sell. Meanwhile his next film project, “The Scout,” went through three directors. And for the first time, Rodney began getting bad publicity, including a costly fight over money demands for cancelled performances at a Las Vegas casino. He claimed he couldn’t perform after his eye was injured in the steam room at Ceasars Palace in March, 1988. The casino refused to pay him for the missed shows. In September of 1990, he finally won the case, getting $725,000 out of the five million dollars he had demanded, but it had come at a high cost. During the trial the casino contended he had “severe problems with cocaine, marijuana and alcohol abuse” and the remarks were quickly picked up by the tabloid press.

Breaking five years of silence, he consented to a New York Post interview to complain, “(The casino) had no case, so they blasted out stuff about me on alcohol and drugs to degrade me and abuse me and debilitate me…my right eye is still suffering. I have to use ointment and drops daily and it’s still not good…I had first degree burns on my lids and couldn’t see out of my eye and they wouldt pay me for shows I couldn’t do. What compassion. I’d worked Vegas for 20 years and never missed a show.”

One sign of his old self was his compassion and support for young comics, including protege Sam Kinison, dubbed “The Beast of Burden.” Meanwhile Dangerfield continued to suffer from his own burdens. One young comic remembered, “He called me at 3am once. He said, ‘Can’t sleep, right? Sure. We give ‘em everything on stage and we go home and have nothing.”

In stand-up, working the crowd, Dangerfield was still in top form, still raging about life’s indignities and still remembering where it all began: “I was an ugly kid…one year they tried to make me a poster boy for birth control…my mother had morning sickness after I was born…”

Dangerfield began to find his way back in 1991, now looking toward a more “family oriented” image with light-hearted films. He was especially proud of “Rover Dangerfield,” an animated cartoon featuring his own script and co-written songs. The film even had a happy ending. As he said, “In life it’s tough to have a happy ending. There’s not too many around. So give ‘em a happy ending at the movies.”

Through it all, Dangerfield maintained his fans. Like boxing’s “Rocky,” it didn’t matter whether he was just a loser, or whether he won a round (as he did in “Back to School”). He got sympathy, he got laughs, and even respect.