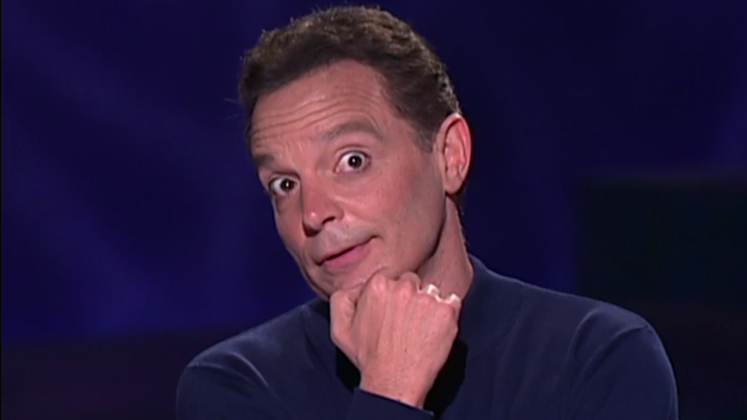 Born in Bensonhurst, Brooklyn, Richard Jeni would listen to his parents’ Jackie Kannon party albums - a precursor to modern stand-up. A class clown, his first gags amused schoolmates. A teacher asked “What is a viper?” 4th grader Richard ad-libbed: “A viper is vat vashes the vindshield!”

In local venues he began to polish routines that would make him one of the most successful comics on the comedy club circuit, leading to many guest appearances on “The Tonight Show.” His career options other than comedy “were limited because I’m a defective Italian. I have absolutely no mechanical ability. You know when you go to the supermarket you step on that rubber part and the door opens? For years I thought that was a coincidence.”

Jeni’s 1989 cable special on Showtime, “The Boy from New York City” was nominated for a cable “ACE” award. The same year he won a Clio award for a series of commercials for the Milk Assocation. As one of the “road warriors” of comedy, he continued a hectic schedule in clubs, Las Vegas, Atlantic City, and both the Melbourne Comedy Festival in 1988 and 1989’s Just For Laughs festival in Montreal.

Too busy for marriage, he did admit, “I’d marry the right girl. Someone beautiful, successful and independent who only wants to talk about me. You’ve got to keep hope alive. It is a sad fact that 50% of marriages in this country end in divorce. But hey, the other half end in death. You could be one of the lucky ones!”

Hot off the heels of his third HBO Comedy Hour, 2005/2006’s “A Big Steaming Pile of Me”, award-winning comic Richard Jeni continues to solidify his place among the stand-up elite. A one-hour concert special on cable’s most honored network is a rare achievement claimed by a small handful of comics. The number that have been asked to return for a third outing is smaller still. Chris Rock says, “The HBO Comedy Hour is the most important showcase there is for comedians. Nobody is more deserving than Richard.  I think Richard Jeni is one of the best comics who ever lived.”

Mr. Rock is not alone in his praise; accolades for Jeni’s comedy have come in from all corners. TV Guide has called him “flat-out hilarious” and People Magazine has called him “thrilling to watch.” In a recent Comedy Central poll/television special, Jeni was voted one of the “100 Greatest Stand-Ups of All Time.” He holds the American Comedy Award for “Best Male Stand-Up Comic.” In addition, Richard remains a sell-out attraction across the country and has been voted “One of the Top 10 Shows in Las Vegas” by the Las Vegas Review Journal.

But stand-up comedy is only part of the Richard Jeni story. In recent years, Jeni has also made his mark as the star of his own TV series, an actor in feature films and an award wining television host. Jeni burst onto the national scene in 1990 with his first Showtime Special “Richard Jeni: Boy From New York City.”  The show received three Cable ACE Awards (the awards for cable excellence) nominations. Two years later, he followed up with his second one-hour concert for Showtime, “Richard Jeni: Crazy From The Heat”, which was the highest-rated stand-up special in Showtime’s history. During this period, Richard was also becoming a favorite guest on The Tonight Show with Johnny Carson. After a couple of white-hot stand-up appearances on the show, Johnny moved Richard up to the status of “panel guest”. Richard’s banter with Johnny got the kind of desk pounding tears of laughter response from the legendary host that made Richard a fixture on the show. When Jay Leno took over, he kept the winning formula of Richard Jeni and The Tonight Show going and Jeni is a frequent and favorite guest of Jay’s.

In the early 90’s, Richard’s success on cable and network TV caught the eye of top executives who wooed Richard with an offer for a coveted HBO Comedy Hour, the most prestigious showcase available to today’s comedians. The result was “Richard Jeni: Platypus Man”, an unqualified smash the won the Cable ACE Award for “Best Stand-up Comedy Special” and formed the basis for his network sitcom of the same name. “Platypus Man” ran for one season on the UPN network.

Meanwhile, corporate America was tapping Richard’s comedy talents to enhance the bottom line. He starred in commercial campaigns for Certs, Arby’s, and won a CLIO Award for his work as a writer/performer in a campaign for the Milk Association. In 1998, a Coca-Cola executive in Atlanta heard some of Richard’s routines on the radio and was inspired to create “Concession Stand-Up Comedy Starring Richard Jeni”, a series of short stand-up pieces that ran during the trailers on over 10,000 movie screens in 1998 and were seen by over 48 million people. Richard also provided the voice for “Max”, the animated character that was the TV and radio spokesman for Office Max.  In 2004, Richard was chosen to create comedy content and appear in series of comedy vignettes as a spokesperson for Yahoo! personals. Richard is also one of the most popular entertainers on the corporate events scene where he has performed for hundreds of the nations top companies.

Throughout the 90’s, awards and accolades continued to pile up and Richard’s growing popularity was making him a sold-out attraction in concert venues. A particular thrill was when George Carlin handed Richard the American Comedy Award for “Best Male Stand-up” on ABC TV. He hosted A&E’s “Caroline’s Comedy Hour” for two years and the show won the Cable ACE Award for “Best Stand-Up Comedy Show”. He hosted the infotainment series “What A World” for The Learning Channel and was nominated for “Best Magazine Host”. He became a popular guest on all the major talk shows while sprinkling in stints as a sardonic and hilarious correspondent for “Entertainment Tonight”.  Jeni made his feature film debut co-starring as Jim Carrey’s best friend in the blockbuster hit, “The Mask”. He followed up with the leading roles in “National Lampoon’s Dad’s Week Off” and 1998’s “Burn, Hollywood, Burn”.

In 1997/98, Richard returned to HBO for his second comedy hour, “Richard Jeni: A Good Catholic Boy”. In it’s premiere outing, the show was the fifth highest rated cable program of the week and a non-stop comedy barrage that Entertainment Tonight said, “…left the audience dazzled, breathless, and hungry for more”.

With the 2005/2006 run of his fifth comedy hour, “A Big Steaming Pile of Me” on HBO, Richard is now firmly established at the top of his profession and has amassed a body of work that can be matched by only a tiny handful of his contemporaries - no small trick for a shy kid from Brooklyn.

In 2007, RIchard Jeni committed suicide, using a handgun. Jeni was subsequently revealed to have a history of depression and bouts of paranoia.