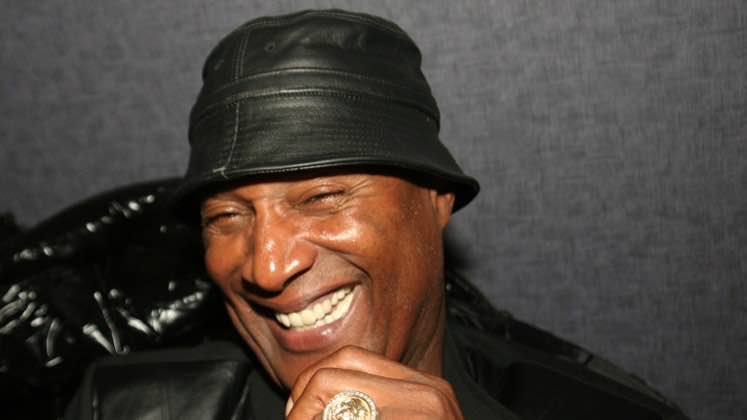 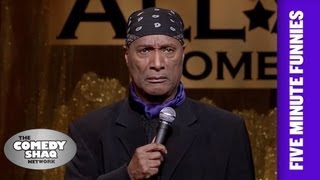 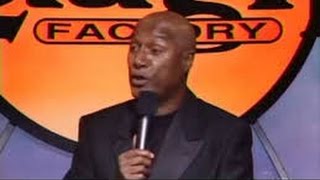 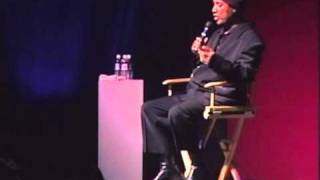 Born in Lousiana, Paul Mooney was raised by his grandmother in Oakland. In his late teens, he ran away from home to join the circus. He eventually became the ringmaster of the Charles Gody Circus. As the “first Black ringmaster”, he discovered he enjoyed writing jokes and making the crowds laugh.

Mooney continued to work as a ringmaster but also pursued comedy. Even then he would also work as a shoe salesman to make money. Mooney would work out material at “Ye Little Club” in Los Angeles, where he met Sandra Bernhard, who was only 18 at the time.

In the 70s, at the height of anti-war protests against Vietnam, Mooney went on tour with Jane Fonda, Peter Boyle, and Donald Sutherland as FTA or “Fuck the Army.”

Mooney met his future frequent writing partner Richard Pryor while he was living with his half-sister in Hollywood. Pryor had come by their apartment while on a date with a friend of Mooney’s sister. Pryor, not knowing Mooney’s half-sister was his sister, proposed they all “get in the bed and have a freak thing.” Mooney kicked Pryor out of the apartment. They later had a drink at a concert together that formed their bond.

For much of his career, Mooney was best known as a comedy writer. Mooney often co-wrote material with Richard Pryor for his specials as well as for Pryor’s appearance on “Saturday Night Live.” He also served as the head writer for “The Richard Pryor Show.” Mooney claims to be Pryor’s biggest fan, saying that you can hear his laughter on Pryor’s albums.

Mooney’s extensive writing credits include “Sanford and Son” (starring Redd Foxx), Good Times and the first season of the African American sketch comedy show “In Living Color” where he is credited with creating the character of Homey the Clown (which was performed by Damon Wayans).

Paul Mooney continued his associations with rising Black comics with Dave Chappelle, a comedian who many believe has inherited Pryor’s mantle. Mooney guest stared in sketches for Chappelle’s Show, appearing as himself in the Ask a Black Dude and then in a similar segment as Negrodamus, where he again answered questions, this time as a seer. At one point, Chappelle was developing a court show with Paul Mooney.

In 2006, after Michael Richards called an audience member the N-word during a well-publicized meltdown at Los Angeles’ Laugh Factory, Mooney appeared with the comic as he attempted contrition for his breakdown. He met privately with Richards as well, counseling him. Mooney described the reason he was involved because he himself was an ambassador for the N-word, using in often in his act.

However soon after, Mooney renounced using the N-word himself. (His frequent collaborator Pryor has made a similar vow after visiting Africa.) Mooney found the vow difficult to keep initially. In his first performance post-oath, he narrowly completed his entirely hour long set without using the epithet. He accidentally slipped it in while performing a bit on O.J. Simpson. An embarrassed Mooney left the stage, later returning to reaffirm his commitment to no longer using the word. He has continued to reiterate the change in his act since.

A later 2006 performance for the show “Showtime at the Apollo” was stopped short. Mooney claimed that he was asked to end his stand-up because of his material on President George W. Bush, intimating that executives from Time Warner were offended by what he said and called for him to leave the stage. Time Warner denied any involvement in Mooney’s removal.

Mooney is bluntly honest about his feelings on race in America on stage and off. Though it’s presented in humor, some audience members have a hard time taking it that way, occasionally walking out of a performance. This can even be seen or heard on some of Mooney’s DVD and CD releases.

Despite his closeness to Pryor and many other comedians, Mooney claims to have never have taken drugs, asserting that he knew that they would hurt him and his career.

Mooney’s sons, who are twins, are also stand-up comics.