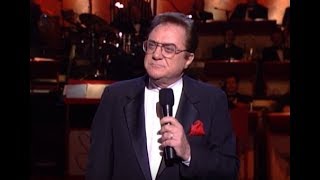 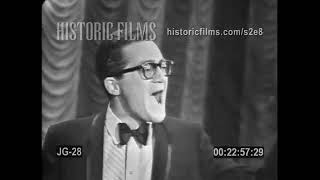 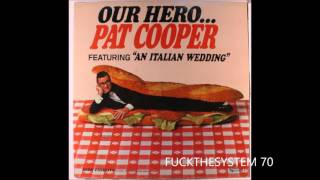 Originally critics felt Pat Cooper was “the Italian Sam Levenson.” He specialized in warm, if somewhat excitable recollections of his childhood and family growing up in Red Hook, Brooklyn. His father was a bricklayer from Bari, Italy. Cooper dropped out of Manual Training High School and for twelve years worked as a bricklayer as well, driving a cab in the winter.

Back in the early 60’s he said, “My stuff is an exaggeration of the truth. When I was a kid and my mother spanked me, it wasn’t the least bit funny. But today, I can speak of it with humor as I describe her left-hooking me from any angle…”

Typical New York-accented humor from Pat Cooper: “I got a genuine Eye-talian mother. Four feet eleven! If they five feet they Turks! She has a bun ovah hee-ah, a knitting needle over hee-ah, a gold tooth over hee-ah. That’sa my momma…black dress, black stockings and black shoes. I say, ‘Poppa, why they wear black?’ He says, “in case anybody dies, they’re ready!”

After getting a break in 1963 on “The Jackie Gleason Show,” Cooper put out a string of successful record albums. Some had catchy covers—like “Spaghetti Sauce and Other Delights,” which parodied Herb Alpert’s album cover for “Whipped Cream and Other Delights.” Alpert featured a sexy nude girl in whipped cream. Here was Pat, ridiculous in his Clark Kent black glasses, sitting nude in marinara sauce.

In the 70’s and 80’s, Cooper heightened his comically angry persona and became known as a “don’t get me started!” comedian who could ad-lib a seemingly out-of-control tirade about any subject. He brought his combative comedy to resorts and clubs around the country. Briefly co-billed on a tour with Jackie Mason in the late 70’s, and and Mason shared a similar identity as ethnic, opinionated, and outrageous.

While Mason would go on to Broadway fame, Cooper opened for Lola Falana, Tony Bennett, Steve Lawrence and similar mainstream performers. He became a ubiquitous figure in the East Coast and was often known to turn his up his high-decibel complaints and cajoling for frequent guest spots on local New York radio shows. He relished his identification with “old fashioned” comedy. He laughed at young comics who would complain after a bad show, “‘it’s not a comedy room.’ I say when did you ever hear a bricklayer say “let’s build a comedy room”? Don’t cop out! You make it the comedy room! Ten thousand a night, there should be no excuses!”