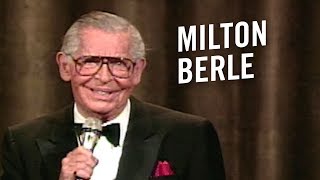 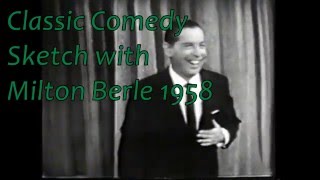 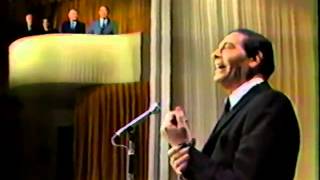 Started at 5 yrs. old where he entered a Charlie Chaplin contest, earning his first laugh. He played many children in silent film after that.

Described as “the thief of bad gags”, Berle’s reputation as a joke stealer seemed to be the cause of more ribbing than consternation. Bob Hope said, “I love to sit home and watch Berle on TV and see how my jokes are doing.”

“Good evening, ladies and gentlemen. I’m sorry I’m calling you Ladies and Gentlemen when you know what you are…Say mister, would you mind moving? Your head is shining right into my eyes! For a minute I thought you were sitting down…” ...I’ll dig ‘em up if you’ll remember ‘em…”

Brash, corny, anything-for-a-laugh, Milton Berle was everyone’s “Uncle Miltie,” the TV superstar who made faces, wore garish costumes, brawled with guests in free-for-all slapstick, and machine-gunned jokes until the audience was helpless with laughter. Berle’s comedy wasn’t always pretty—especially when he turned up in drag—but he was boldly funny.

Born in Harlem, 68 West 118th Street, the Berle family was desperately poor. One of Milton’s bitterest memories was at the age of four. One day there was almost nothing to eat in the house for Milton and his brothers: “It was one of the worst days of my life. Also the longest. The three of us were so weak with hunger we just lay around the flat, waiting for Mom to come home. It got later and later. Finally, long after dark, Mom came in. Crying and hollering, we rushed her, demanding something to eat. All she had was four bagels which she’d gotten for two cents because they were leftovers. We each got a bagel plus one third, carefully divided…then we all went to bed and cried, because we were so hungry and miserable…” Sometimes they did get three meals a day: “Rice.”

Berle’s stage-struck mother Sarah got him into show business. She brought him to Fort Lee, NJ to be an extra in silent films. Berle claimed his screen debut was as the baby Marie Dressler held to her heart in “Tillie’s Puncture Romance,” and that he was in “The Perils of Pauline”: “I was the kid on the top of the moving train, running with it…Pearl White was holding on to me and, to this day, a lot of comics wish I’d never been saved!”

In 1920, only twelve years old, he joined the cast of “Floradora” stealing scenes by deliberately dancing off-stride from the rest, trying jokes and techniques taught to him by his mother. The following year he and Elizabeth Kennedy became “Kennedy and Berle,“working their way through vaudeville. When she got married, he went solo. He eventually evolved his own comedy sketch in 1927, “Memories of Milton,” playing the patsy to several women who gave him hard luck stories. An mc at The Palace in 1931, a rising star in “The Earl Carroll Vanities” and “The Ziegfeld Follies,” Berle came to radio in 1936 and had his own radio show for a while in the 40’s, but his greatest fame would come with television.

In 1948 he starred on “The Texaco Star Theater,” wowing audiences with all the vaudeville bits he had picked up over the years. He got the covers of both Time and Newsweek on the same day May 16, 1949. A perfectionist, he directed the show’s director, advised the make-up man, moved the cameramen around, and supervised the writers. Though it was a strain, and it made him a few enemies, it paid off. When Berle’s show premiered on June 8, 1948, there were half a million TV sets in use in the country. The following year, a million. By 1954, 26 million. The demand seemed to come from Milton Berle’s supply of jokes and funny faces. The demand was mutual. As Milton sang in his theme song each week, “There’s just one place for me and it’s near you…I love you all and I love to be near you.”

Branded the “the thief of bad gags,” Milton did indeed believe that nobody could tell a joke better than he. Berle’s on-stage persona was labeled brash to the point of obnoxiousness, the epitome of “show biz phony.” Off-stage, Berle was usually characterized as honest, direct, considerate and generous. Some glimpses of the other side of Milton Berle were seen by fans in his dramatic appearances in movies and on Broadway, notably his brilliant work on stage in “The Goodbye People.”

Though tastes have changed somewhat, Berle’s vintage TV clips have found an audience on video. It’s hard not to be bludgeoned into giggles by Berle’s relentless aggression. To a woman getting to her seat: “You can sit down, madam. We saw the dress.” A double-dose to a woman with a feather in her hat: “That looks like the feather that signed the Declaration of Independence. And the guy with her looks like he signed it!”

Berle knew what the critics said about him. In his own starring movie, “Leave ‘em Laughing,” he’s even upbraided by his agent for being a selfish and superfluous gagster: “Jack Benny, Bob Hope, Red Skelton—what’ve they got? A style of their own. What’ve you got? You’ve got all their material and no style. You’re a parrot with skin on.” In the film, Bert Lahr also took him to task: “They’ve got to like you, feel sorry for you. Do they? People forget jokes…what sticks with them when they leave the theater are the nice things the comic does, like spending his last dime on flowers for a girl who don’t know he’s alive…a joke ain’t everything.”

Fans seemed to recognize the passion to please that was behind Berle’s bombast. They knew that his desire to be in front of an audience was heartfelt and joyous. They tuned in for more every week. He was proud to say that there was no laughtrack on his show: “we made the audience laugh.” They roared over some gags over and over, like his catch-phrase “Make-up!” followed by the huge dusty powder puff a rushing stage hand smashed in his face. His 1951 contract with NBC was an astounding $200,000 a year for thirty years: “And I lived, thank goodness, to 1981 when the contract was up and they paid me for 30 years.”

Berle was not the top comic in the land after the 50’s but he remained a popular talk and variety show guest and was always in demand for live performances. In the 80’s he was also called upon more often for made-for-TV dramas including “Doyle Against the House” (for which he was Emmy-nominated) and “Family Business.”

Berle’s heart operation in 1985 slowed him down only temporarily. In 1986 he was up and around, playing a series of concerts with Henny Youngman. He said of the operation, “It has really improved my sex life. I can hardly wait to tell my wife about it. I went to an honest doctor, he would never operate on someone unless he needed the money. And the hospital was very well-suspected. I mean respected. They spent $5 million on a new recovery room—and it hasn’t been used yet!”

In 1987 Berle began gathering his old TV clips for “The Second Time Around,” a series of TV specials and video cassettes. The reaction to Berle was typical. People magazine found him “as overbearing as ever—age (he’s 81) clearly hasn’t introduced him to humility.” Audiences just ran out and picked up the tapes. In 1989 Berle put out a joke book crammed with some of the best from the millions in his computer gag file.

Young comics asking advice from Berle were told to answer three questions on stage: “Who am I? What am I doing here? Why am I here?” He added, “Comedy is a lonely art. When you make a personal appearance you’re alone…alone on the stage. If the laughs don’t come, you have egg on your face. That’s lonely. There’s another kind of loneliness, even now. Maybe you don’t feel like being funny…maybe your mind is on other things…you feel isolated.”

While known to be serious off stage, and his autobiography was filled with regrets, in public Berle remained the complete ham, ready to step in front of the public for most any reason. It wasn’t just the money ($400,000) but the chance to sneak into folks’ living rooms that made him do a commercials for BVD’s: “At my age, I’ve done just about everything in my BVD’s.” He added, “Waiting for me to retire is like leaving the porch light on for Jimmy Hoffa. I could never think of it. A retired person with nothing to do is a dead person.”