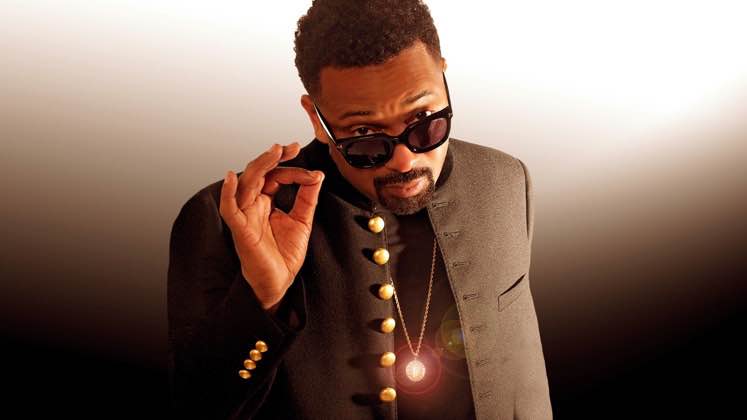 Mike Epps was born in Indiana, switching his time between his grandparents in Gary and between his mother’s home in Indianapolis. His comic impulses were evident from an early age, but not always in positive ways. As a young teen, he spend four months in juvenile detention after super gluing a classmate’s hands together.

While in his late teens, Epps entered a stand-up comedy contest at a local club. Though he did not win, the experience was enough to drive him to the art form. He soon moved to Atlanta, which had a burgeoning African-American circuit. He became a regular at the Comedy Act Theater.

He was not there for long, soon striking off for New York at the urging of a club owner. He was only 21. By the time, Def Comedy Jam had ground into a phenomenon and it swept up Epps along with it. He appeared in two of the episodes of the groundbreaking series and later, toured as part of the Def Comedy Jam tour.

An appearance at Los Angeles’ Comedy Store would inspire Ice Cube to cast Epps in “Next Friday.” Later Epps would star in “How High”, “All About the Benjamins”, “Resident Evil: Apocalypse” and the big screen version of “The Honeymooners” opposite Cedric the Entertainer. Throughout his movie career, Epps has prided himself in continuing to perform stand-up citing it as “therapy” to work out material in front of an audience.

Epps has been tapped to star in a biopic chronicling the life of Richard Pryor. Epps met the legendary comic only a few months prior to his death. The status of the project, which was being planned by Pryor’s widow, is unknown. Epps claims to have not heard Pryor’s stand-up until he was 22 years old.

In 2006, Epps hosted a new season of Def Comedy Jam for HBO. In the same year, shot a one-hour special entitled “Mike Epps: Inappropriate Behavior” for the network. He shot “Behavior” at the San Jose Improv,

Epps has stated his favorite place to perform in New York City is Manhattan Proper, which only has comedy on Tuesday night. He stated that the difficultly of getting the diverse audience of drug dealers, pimps and hookers to laugh excited him.