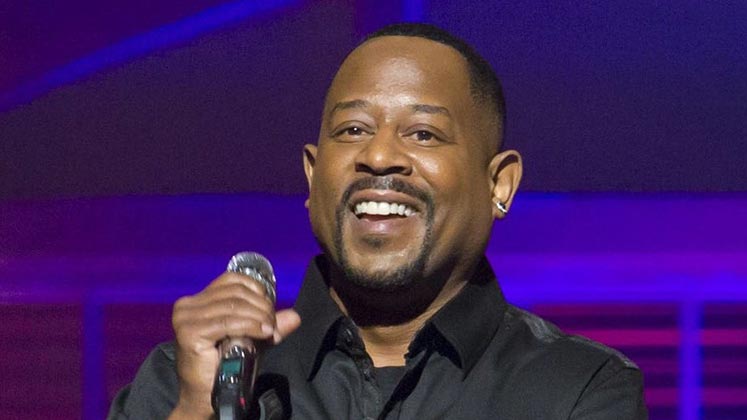 It’s the title of a Martin Lawrence film and an apt description of the man himself. Everything about him is unexpected…even his birthplace.

Martin was born in Frankfurt, Germany. His father was in the Air Force. Eventually the family came Stateside, first to Queens, New York and later Landover, Maryland.

A typical “class clown,” Martin won over one of his teachers who decided to simply give the kid a few minutes at the end of every class. Martin soon found himself coming up with “fresh material” on demand.

Martin’s easy style of faces, insults, wisecracks and slices-of-life got him attention in local comedy clubs. He also had the discipline to hone his work down for mass consumption and after an appearance on “Star Search” he found the doors opening wide for him in all areas.

The pebble-headed zany with the accustatory eyes became a regular as a busboy on the syndicated sitcom “What’s Happening Now.” This led to his own cable series, “One Night Stand” and two years of hosting “Russell Simmons’ Def Comedy Jam.” Able to take directions as well as run wild in stand-up, Martin became a film actor, debuting in Spike Lee’s “Do The Right Thing.”

Lawrence’s starring sitcom for Fox-TV, “Martin” had a tumultuous run from 1992 to 1997, marked by disruptions on the set and off. The tabloids enjoyed reporting on the wild and crazy lifestyle of Lawrence and his wife, Virginia. But Lawrence’s star did not dim, and instead he went on to co-write, direct and star in “Thin Line Between Love and Hate,” star in his own concert film (“You So Crazy”) and co-star with a variety of top film stars including Will Smith (Bad Boys) and Eddie Murphy (Life).