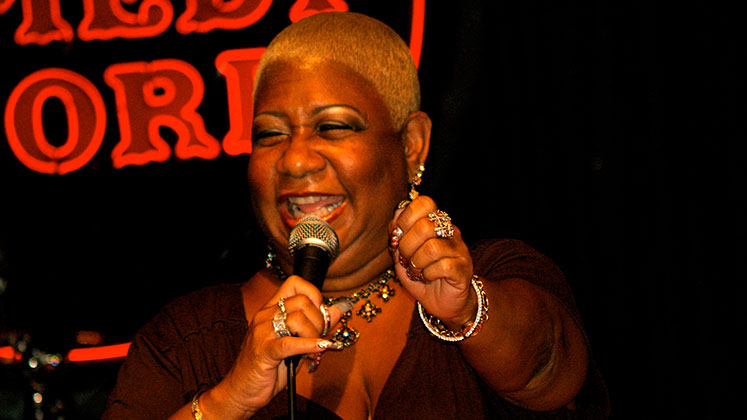 See all tour dates for Luenell

Luenell is a force of nature. This talented comedienne, actress and singer, was born in Tollette, Arkansas, a town whose population barely registers with the U.S. census. At the tender age of 10, she caught the acting bug after seeing the plays South Pacific and Ain’t S’posed to Die a Natural Death. She enrolled in theatre classes at the grade school level and continued to study through college and cut her teeth at the Oakland Ensemble Theatre.

In March of 1995, Luenell’s mom passed away and one month later she discovered she was pregnant. Some months later, a beautiful daughter Da’Nelle was born and she is the joy of her life, her “miracle child” as Luenell puts it.

Not long after this however, Luenell got a rude awakening. Luenell was sentenced to 365 days in jail for a series of indiscretions taken while working at a bank months earlier. It played out like an episode of Lil’ Kim on Court TV. She eventually served just over 4 months.

These days, Luenell’s life is on track. Her star continues to rise due to her appearances in television, film and music videos.  Best know for her breakthrough role as the “hooker with the heart of gold” in the blockbuster comedy of 2006 “Borat” – Luenell is recognized by both mainstream AND urban sectors of the population. Her two-year tour and DVD appearances in “Katt Williams American Hustle” have created an almost cult-like following.

Luenell had an amazing 2012 with appearances in three #1 feature films – “Think Like A Man” with Arielle Kebell and Meagan Good, 3D animated hit “Hotel Transylvania” with Adam Sandler, and “Taken 2″ with Liam Neeson. She also starred in the hilarious comedy “That’s My Boy” with Adam Sandler and Leighton Meester.

Luenell hasn’t been short on television appearances either with recent episodes of “The Middle” and “Always Sunny In Philadelphia,” as well as stand-up appearances on “Snoop Dog’s Bad Girls of Comedy” on SHOWTIME and “Stand-up In Stilettos” on the TV Guide Network.

Luenell is living her dream.  With such an intriguing past, one would wonder how can she be so funny, but it’s just that…life.  Her reputation as a comic superstar continues to flourish, “…comedy demolition machine” (EURweb report) “a sidesplitting high wired act without a net…” (Scoop LA), “…comedy to die for.” (Metro LA)  “…one of the top 25 funniest people in LA (Los Angeles Magazine) and the accolades continue to roll.