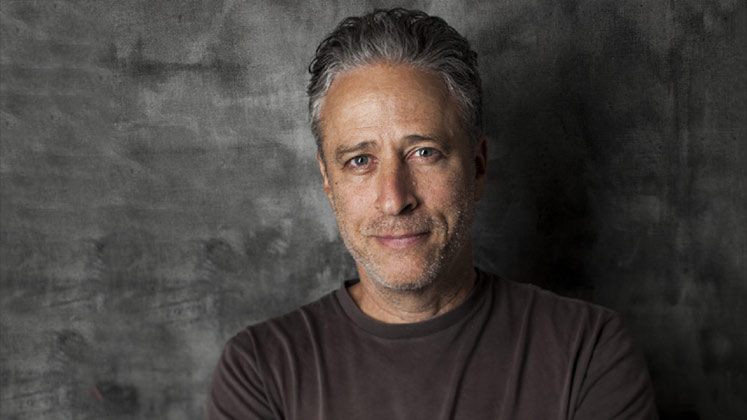 It seems like Jon Stewart’s stand-up career was always designed to put himself behind a desk. The Trenton comic was not as neurotic as Richard Lewis and even less stinging than Jerry Seinfeld, but if his personality wasn’t powerful enough to sustain an hour on his feet, it was considered wry and personable enough to work off others.

After a stint on MTV with a half-hour talk show, Stewart was simply waiting for a big-time host to make a mistake, and the one who stumbled first was Arsenio Hall. At 31, he stepped into the spotlight ready to bring “youth” to a market that seemed impatient with an aging David Letterman.

“An alternative talk show? Oh, I don’t know,” he said before his debut. “Basically the concept is to give a more casual approach to what’s already out there. It’s not like I had this idea—‘let’s talk to celebrities about their new projects’—and Paramount said, ‘You’re a genius.’ All you can do is put on what you think is cool.”

Entertainment Weekly applauded Jon’s “snarky, slackerly attitude” and his choice of t-shirt and jeans for a wardrobe. The general public was less interested in bad clothes and snarkyness, and Stewart was relegated to the role of impatient guest on Letterman’s and other host’s talk shows. The self-effacing comic wanted another shot at being a desk jockey, figuring he had no business trying a sitcom: “I never felt I had the right idea (for a sitcom). I’d say to the networks, ‘Imagine Mary Tyler Moore with a penis.’ And they would, and I couldn’t get their attention back.”

In a parody of real-life, Stewart turned up on Garry Shandling’s “Larry Sanders Show” sniffing to replace host Larry Sanders. In the real world, when Tom Snyder departed his time slot after Letterman, Jon Stewart was considered the front-runner by most everyone—except the people that mattered.

In a move that was greated with apathy and then disgust, fair-haired (if greasy) Craig Kilborn won the assignment pouring a smug, pouty grin over his face while flashing a sassy thumbs up. Dark, short (5’ 7”) Stewart had to settle for second best, which was to take Kilborn’s old job as host of the Comedy Central (a cable channel) “Daily Show.” He had to admit that the low budget set “looks like doll’s house furniture.” Meanwhile Kilborn said he left “a phone book for Jon to sit on.” As the show’s head writer Chris Kreski aptly pointed out, “Jon’s the kid Craig probably beat up every day in fifth grade.”

Stewart settled in and won some sighs of relief for offering a show that had edge without bullying attitude. It also offered up some amusing comic ideas on a good night. And for those who’d rather read a book to get sleepy, Stewart had that area covered, too.

With most every stand-up from Reiser to Degeneris and from Romano to Foxworthy writing books, Stewart quickly weighed in with “Naked Pictures of Famous People.” Unlike most of the others, he actually received some solid reviews. Entertainment Weekly declared: A funny thing happened when stand-up comic Jon Stewart sat down to write a book: He actually wrote a funny one. Rather than merely transcribe his monologues (like Jerry Seinfeld did) or pen a confessional tell-all (like Roseanne did—twice)” Stewart penned “18 original humor pieces on a par with Woody Allen’s Without Feathers and Steve Martin’s Cruel Shoes.”

Taking aim at celebrities, Stewart offered mock moments of fame and daring: Martha Stewart offering advise on “vagina treatments…for the summer you may want to go with simple horizontal pull shades.” And in a mordant look at “The New Judaism,” he writes that “by the year 2010, Jewish life in America will have deteriorated to the point where a Seinfeld reunion special will be a non-sweeps event.”

It seems likely that by 2010, Stewart will still be sitting behind a desk, and that if it’s a “non-sweeps event,” it will still attract a very loyal following.