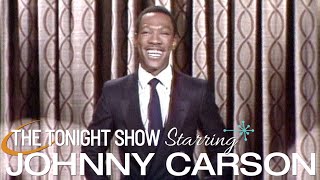 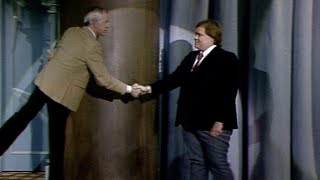 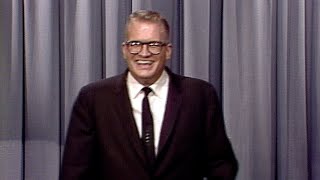 Once he retired from the Tonight Show, he was rarely again in the public eye save for a couple of appearance on The Late Show. He did however write a small piece for the New Yorker and some monologue jokes for Letterman.

Johnny Carson’s amazingly long tenure as host of “The Tonight Show” made him a legend. He became as famous as his three main influences, the men who he chronicled in his college thesis on the art of radio comedy. Carson combined the warm, pleasant, day-to-day appeal of Jack Benny, the naughty wiseguy spirit of Bob Hope and the wit of Fred Allen into a package uniquely his own.

From his late night time slot at ll:30, he spend three decades sending a nation to bed with a monologue of jokes, sketches, and amusing interviews with the biggest and brightest stars. Through the years and many experiences traumatic for the country (assasinations and disasters) and for himself (ranging from death threats to three divorces), nothing seemed to affect the cool, self-assured and professional style Carson exhibited each night. At first critics labeled Carson the opiate of the masses or America’s night light, but over the years they began to appreciate his considerable skills as a comedian, his mastery of monology and his light, witty touch with celebrity interviews. He soon took his place among the most liked, most durable, and most trusted figures television has produced, including Lucille Ball, Walter Cronkite, and Ed Sullivan.

Born in Corning, Iowa, Carson grew up in nearby Avoca, Iowa and later Norfolk Nebraska. A shy kid, he learned magic tricks to call attention to himself and win admirers, and as “The Great Carsoni” even made some spare change with local shows. After World War II he worked on Omaho radio and TV. Good looking, respectful, but possessing a naughty streak, he recalled getting in trouble even back then for stunts and jokes: “One of the first jokes I ever told…A guy went to Mars. His friend said, “Are the people any different?” He said, “No, the men look like men. The women, hell, there’s a little difference. The breasts are on the back.” ‘The guy says, “That’s crazy.’ His friend said, “It’s wonderful for dancing!’”

After a long, “Grapes of Wrath”-style drive to California, Carson struggled before finding work as an announcer. He came to television with the local “Carson’s Cella,r” an experimental comedy show in 1951-1953 and began writing for Red Skelton. When Skelton knocked himself out on a prop door, Carson went on in his place earning good reviews. Subsequent quiz and variety shows were disappointing, but “Who Do You Trust?” a daytime show with comedy interviews similar to Groucho Marx’s “You Bet Your Life” won him increasing fame and attention.

Carson remained with the show, turning down a role in the new Broadway musical “Bye Bye Birdie” (it went to Dick Van Dyke). He and Van Dyke were later up for the same role in a sitcom. Dick won out and “The Dick Van Dyke Show” became a hit. But Carson would get his chance at stardom when he replaced Jack Paar as host of “The Tonight Show.”

Carson offered a distinct change from Paar. He was cool, in control and self-assured. He steered the show away from controversial guests and topics, favoring guests who could ad-lib and entertain. He resurrected some aspects of “The Tonight Show” when it was hosted by Steve Allen: he performed in sketches and had regular segments for the alter-egos he developed such as the aging “Aunt Blabby,” redneck “Floyd Turbo,” failed magician “El Moldo,” TV pitchman “Art Fern” and the most popular, seer and psychic “Karnak the Magnificent.”

While the influenced of past comics and contemporaries was obvious (there was a strong dash of Jonathan Winters in “Aunt Blabby” and Gleason’s voice in “Art Fern”), others would be influenced by the most popular feature of “The Tonight Show” under Carson, his opening monologue. Many were in awe of his ability to walk out and perform “cold” five to eight minutes of untried material. Part of his style was to winkingly make the audience his co-conspirator in putting the routine over. If he started a joke with “It was so hot today…” someone would eventually shout “How hot was it?” In an aside he might point out that he was trying for a segueway (being “The Prince of Blends”) or go for “the biggie,” or that he was “heading for the dumper” after a few bombs in a row. The audience shared Johnny’s predicament and were rooting for him. Over the years he raised the sophistication-level of his audience by conditioning them to accept political jokes and offbeat gags; the kind of humor previously available only in nightclubs via a Mort Sahl or Jonathan Winters.

Carson became so well-known for his monologues and for “The Tonight Show” that he rarely ventured from it, playing Las Vegas resorts from time to time but rarely starring in a television special or film. He was offered Gene Wilder’s role in “Blazing Saddles” but turned Mel Brooks down. He explained, “I’m on every night playing myself, so it would be hard to make the transition.”

For thirty years competing networks tried to shake viewers from their habit of watching “The Tonight Show” to no avail. While occasionally a talk show host won a few nights with a particular guest or some controversial publicity, none could rival Johnny Carson. None seemed to have the ability to make a show fun to watch no matter who the guests were, and unless they were consciously imitating him (as in the case of his guest hosts who shared his writing staff), none could get laughs with such a wide range of monologue humor.

Carson’s gags could be silly. During the third of his bitter divorce settlements he announced on the air that he would never marry again: “I resolve if I ever get hit in the face again with rice, it will be because I insulted a Chinese person.” He could cover political subjects sharply but without offending the audience: “Did you know RIchard Nixon is the only president whose formal portrait was painted by a police sketch artist?” He never hesitated to offer a questionable quickie that might seem offensive: “Nevada: the home of the 20 minute girlfriend.” And he was also capable of handling questions from the audience. Question: “What is the difference between Nebraska and California?” Carson: “Manure is cheaper in Nebraska and there’s less of it.”

Late in the 80’s Carson developed some new routines; comic “lectures on life” delivered as a valedictorian, and readings from a mythical romance novel featuring such breathless paragraphs as: “There will be no heavy petting below the neck,” said Hilary, standing on her head. Brett said, ‘There’s many paths to Xanadu, but only one way to Mount Hilary.’”

Carson remained a man of paradox; friendly and smiling on television but shy and serious in person. He admitted feeling more comfortable performing in front of 20 million people than mixing with a half dozen people at a party. Critics and fans were surprised to realize that after seeing him almost nightly for thirty years, they actually knew very little about him. Some of the intricacies of Carson’s personality have been explained in biographies of him. Some are still elusive—which is part of the reason why, with a little cool and mystery to go with his warmth, humor and charm, Carson remained a personality viewers could watch year after year.