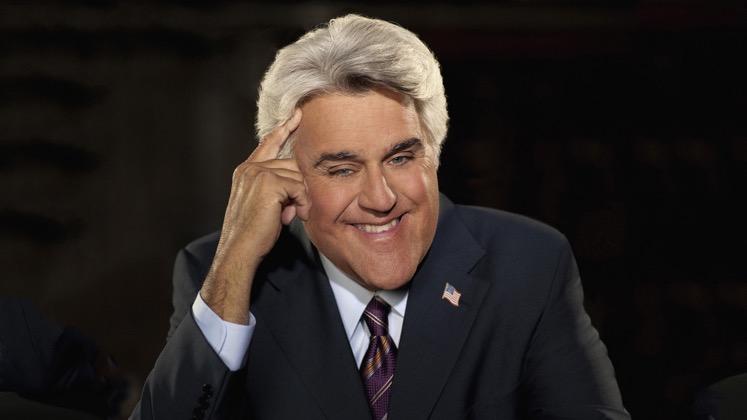 At first, TV critics couldn’t get past the unusual face of Jay Leno. He had “the chin of Dudley Do-right and the facial contortions of Herman Munster” said one. “Looks like a cross between a young Elvis Presley and an upright Gerry Cooney,” another reported. One called him “Anvil faced.” Another, “Pelican headed.” His voice was also out of the norm for the average comic, a sometimes lispy nasal whine that rose up in pitch when aggravated but just easily shifted low for impatient grousing. Once the comic’s face and voice were described, his comedy style was next. “A barroom bouncer version of Andy Rooney,” said one. “The common sense comedian,” said another. “I got a write-up once where the guy said I was a thinking blue-collar comedian,” Leno recalled, “which I sort of like.”

After years of talk show exposure, including regular guest-hosting for “The Tonight Show,” Leno emerged as the most likable of the show’s regulars, youthful and acerbic enough to please the crucial young audience the show was losing, yet genial and working-class enough to keep the older audience tuning in. And so the comic with the unlikely visage became such a familiar face to American viewers, that he was chosen to replace retiring host Johnny Carson.

Born in New Rochelle, raised in Andover, Massachusetts, the part Scotch/Irish part Italian youngster recalled that he always got laughs, even at the age of “about three and a half. I remember a group of people. I remember the living room. I remember the tiny TV, and I remember saying ‘How come girls have camel humps?’ I remember my aunt—“Oh, oh.” The whole family was there—“Oh, oh” and they go running around the room. And my father and the men were laughing. And my mother…she’s trying to act as if nothing happened.” Soon Jay was the class clown in school. When the students were discussing the adventures of Robin Hood, Jay had something to add: “They killed people by boiling them in oil,” he declared. “But they couldn’t boil Tuck. He was a friar!”

Leno’s first job was not in comedy, but working for a Ford dealership. After he was fired for dropping a hubcap, Jay wrote a letter to Henry Ford II complaining about his unfair treatment. He got his job back. Later he worked as a chauffeur and got an assignment to do the driving for Jack Lemmon. Leno confessed his show biz ambitions to Jack, who encouraged him and added affably, “Maybe you’ll move to Beverly Hills and we’ll be neighbors.” That prophecy would later come true.

By the time he graduated from Emerson College, Leno was working Boston strip clubs for $20 a night: “When I was a teenager, all I had to do to get on stage in clubs in Boston was bribe the bartender $50. I told him if you like my act I get the $50 back. Later I went around auditioning all over the place in Manhattan with my friend Freddie Prinze.” He had trouble getting to television. One agent confided, “your face will frighten little chidlren.” Circa 1974, sporting fashionably long hair, Leno tried out routines such as Elvis Presley doing “To Be or Not To Be.” In 1975 he met David Letterman in California and the two formed a close friendship. Over the years, Leno sharpened his stand-up style and relied more on commentary than zany antics. He wrote for Jimmie Walker and in 1977 made his first appearance on “The Tonight Show.”

Over the next ten years Jay was known as comedy’s “road warrior,” relentlessly touring the country, learning to tell the same joke and get the same amount of laughter from a young urban audience or an older Vegas crowd. He had his share of troubles along the way. Opening for Muddy Waters, he was hit in the head with a ketchup bottle. The club owner remarked, “You’re a professional. You should have seen it coming.” Another time, a ringsider shouted “I hate you!” Reasonably, Jay answered, “How can you hate me? You don’t even know me?” He leaned down and asked “Where are you from?” The man laid Jay out with one punch. Despite such moments, Jay discovered “everybody’s got a sense of humor—a comedian’s job is to find it…you don’t have to change your act, just your angles. Let’s say you’re doing a phone company joke. In Vegas you might start out saying ‘I’ve had some trouble with the telephone company lately.” In a college you might start by saying Damn Nazi Fascists at the phone company…”

Mort Sahl was clearly Jay’s main influence as he became more and more known for “clever” comedy with topical bite. He said, “I always liked Mort Sahl better than Lenny Bruce…I liked Lenny ok, but my feeling was that a lot of the time he was preaching to the converted….Mort would come on a middle class show like Ed Sullivan, and TV was as white bread as it could be in the 50’s, and he would go after somebody like Joe McCarthy. He did it with such a sharp wit that even people who didn’t want to hear it said, “Yeah, Sahl’s right.” I like people who work within certain confines and can be clever within those confines…” Unlike Sahl, Leno was not branded an intellectual political satirist. This was fine with him, since he thought of himself as “just an average person, and if I have any special intelligence, it’s in the area of comedy. I tend to like popular things and I get confused by the same foriegn films that most people get confused by.” The most successful stand-up performer at performing topical wit for the masses was now Johnny Carson. And shortly, Leno would be one of his favorite guest-hosts, then the only guest host, and ultimately the host.

Along the way Leno picked up a few tricks in getting his point across without offending. Rather than use four letter words, he adopted a funnier strategy: “Instead of calling someone a (four-letter name), it’s funnier to call them a sodomite or penophile. It makes people laugh.” Leno also learned to emulate Johnny Carson’s habit of smiling and seeming to chuckle light-heartedly after squelching an audience heckler or delivering a particularly potent line. It helped the audience understand he was “just kidding.” He was also not above the old Carson habit of the lightly blue one-liner: “They’re operating on hemorrhoids using lasers…you talk about seeing the light at the end of the tunnel!”

One of the differences between Leno’s approach and Carson’s was Jay’s love of chiding sarcasm, dressing up a cartoonish joke with mock irritation: “A woman in New York—this was in the paper today—was arrested for going topless on the beach….You know, we have dead animals, we have medical waste, oil on the beach—the people who do that, they don’t get arrested, right? Yet a woman walks around topless, she gets arrested. Now what would you rather have on a beach, a dead oily animal or a topless woman? Yeah! Boy! One happy note—you don’t hear about beached whales anymore. I guess with all these oil slicks they just slide back into the water.”

In 1986 Jay headlined 300 shows around the country at $15,000 minimum per show. That year he received a two-year contract to work the Sands Casino, and starred in a Showtime cable special. He had gotten a lot of TV exposure thanks to both “The Tonight Show” and his many appearnaces on “Late Night with David Letterman.” Within a year he was named the permanent host on “The Tonight Show,” subbing for Carson a dozen weeks during the year and appearing every Tuesday night. Typically the down-to-earth comic made fun of his success: “Permanent guest host? That’s a triple oxymoron—three words in a row that contradict the one before.” In 1991 he was named the host, only the fourth since “The Tonight Show” premiered in 1954. His estimated salary: three million dollars. He put it all into perspective quickly: “Well, when I called my mother, she said, “Oh, I love Johnny. Why can’t Johnny stay and maybe they can find something else you can do? Isn’t there another time spot for you?” I said, “Ma, whatever you do, don’t talk to the press.”

Like Carson, Leno displayed coolness under pressure and a love for his work: “You get into the lights and then it’s like a Zen thing. It’s the most quiet, relaxed place in the world when you’re onstage, because you’re just there. Like you’re in this cradle and you just rock back and forth. The laughs just kind of hold you up and keep you going.”