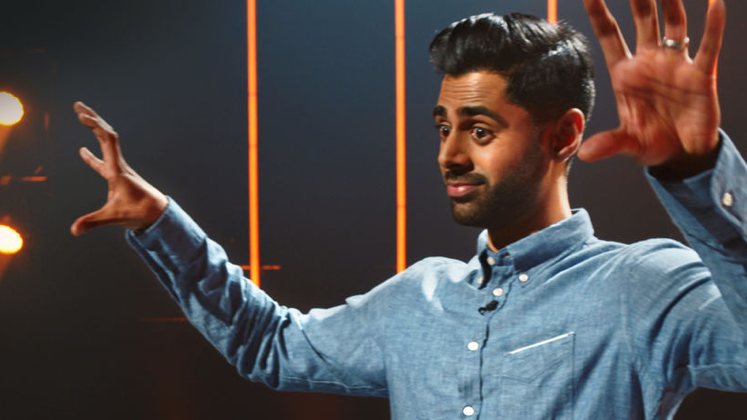 Outspoken, left-leaning political comedian Hasan Minhaj was born on September 23, 1985 in Davis, California to Muslim parents hailing from Aligarh, India. Much of his comedy and politics stem from his experience growing up as an Indian-American outsider in the supposedly progressive Bay Area. It didn’t help that for the first eight years of his life Minhaj could only confide in his strict, overwhelmed father while his mother studied medicine in India.

Minaj studied political science at University of California, Davis and would regularly travel to San Francisco to perform. After winning a San Francisco radio comedy competition, he began working as an opening act for big name comedians like Katt Williams, Pablo Francisco, and Gabriel Iglesias.

In 2009, Minaj moved to Los Angeles where he hosted several programs, including the Bill and Melinda Gates funded documentary “Stand Up Planet,” MTV’s Failosophy, and his own web series The Truth with Hasan Minaj. During this time, he also guest starred in the fourth season of Arrested Development and HBO’s Getting On.

On November 19, 2014, Minhaj gained national attention when he became one of the final correspondents to be hired on The Daily Show before Jon Stewart’s departure. He would regularly be featured as the ‘Brown Person’ or ‘Muslim’ correspondent and mock the fact that he was expected to speak for billions of people worldwide.

His success on The Daily Show led him to be chosen for the 2017 White House Correspondents Dinner. At the dinner, Hasan bashed the absent President Trump for not being able to take a joke in person and made a passionate plea for stronger gun control and a more probing free press. His new stand up special, “Homecoming King,” which is based on his 2015 off-Broadway theater show of the same name, is available on Netflix. He currently lives in New York with his wife Beena Minaj.