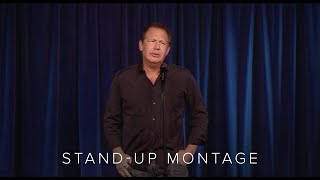 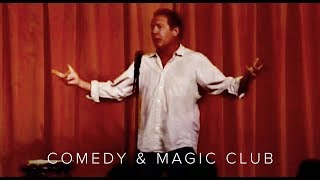 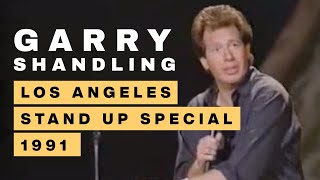 At first Garry Shandling was just another mild-mannered nerdish stand-up telling play-safe jokes on “The Tonight Show.” His self-deprecating material wasn’t much different from anyone else’s, much of it concentrated on his dating woes: “I just broke up with my girlfriend because she moved in with another guy. I said, “That’s where I draw the line,” and I dumped her, sort of.”

In 1991 the nasal, frozen-faced comic hosted “The Grammy Awards.” Diffusing the issue of excessive sex in rock videos, he declared, “Who’s to say what’s obscene? Frankly, what most people find obscene—I would pay for.”

He looked like he got what he deserved, with his wimpy, blow-dried puff-mat of hair, small eyes, and a thick grill-work of teeth sandwiched between rubbery lips. Joining David Brenner as a reliable, clean and harmless comic suitable for family consumption, Shandling guested often on “The Tonight Show” beginning in 1981. In1983 began guest host duties. His first assignment was subbing for Albert Brooks, the scheduled guest host. It was typical of Shandling’s comic personality to be the guest host for a guest host.

Other comics of his generation were not impressed. Bob Goldthwait: “A lot of guys do material about how they can’t get a date. If that’s Garry Shandling’s problem he could buy sex. I’ve got bigger worries.”

Growing up, the Shandling family had big worries. Garry was born in Chicago but the family moved to Tuscon for the health of his brother Barry. The boy died there at thirteen of cystic fibrosis. Garry was ten at the time. Garry developed an interest in comedy, especially in the albums by Reiner and Brooks, but majored in marketing at the University of Arizona. After he wrote some jokes for George Carlin, he decided to come to Los Angeles in 1973 and write jokes full time. He wrote episodes of “Sanford and Son,” “Three’s Company” and “Welcome Back Kotter.”

Shandling had more trouble with cars than girls in 1977. He got into a minor traffic accident. While examining the damages with the other driver, a third car suddenly plowed forward, crushing him between the two cars, causing internal injuries that were nearly fatal. Fortunately Shandling had a strong constitution and despite his meek appearance, was committed to exercise and a health lifestyle, including a vegetarian diet. Once back on his feet, Shandling was motivated to get his career into high gear. Following his break-through on “The Tonight Show” he hosted his own “Alone in Las Vegas” Showtime special in 1984, and followed it with his “25th Anniversary Special.” In 1986 he and Jay Leno were named “The Tonight Show’s” permanent guest hosts, but he resigned to star in his own TV series.

Back in 1968, Woody Allen got laughs, female admirers and male commiserators for playing a fantasy-filled, unappealing, but surprisingly wiry and plucky neurotic. 20 years later, Shandling was the hip loser too, filling his sitcom show with in-jokes and moments of fantasy, most of it keyed to his clever re-working of the old “Burns and Allen Show” device of talking directly to the viewer and sharing the joke with them. In an episode where he planned a surprise party, he coached the studio audience on how to yell “Surprise” and then said “Okay, now you at home…”

Shandling had experimented with the idea much earlier. On the “Dr. Duck” comedy video of the early 80’s, a sequence featured Shandling describing a date with beauty contest winner Miss Maryland—and then acting it out. He’s suddenly there with Miss Maryland, complete with her sash, whispering to the viewer, “Do you believe this? I’m under dressed…Do you believe this? She’s sitting on the roof of the car waving to people.”

Shandling’s show became a cult hit but that was all. From Showtime cable it moved to the Fox network where it sank to the bottom at the ratings, one listing placing it 80th out of 81 shows. In 1990 he decided to call it quits. He said, “Frankly, I’d really like to do something in which I’m not playing Garry Shandling.”