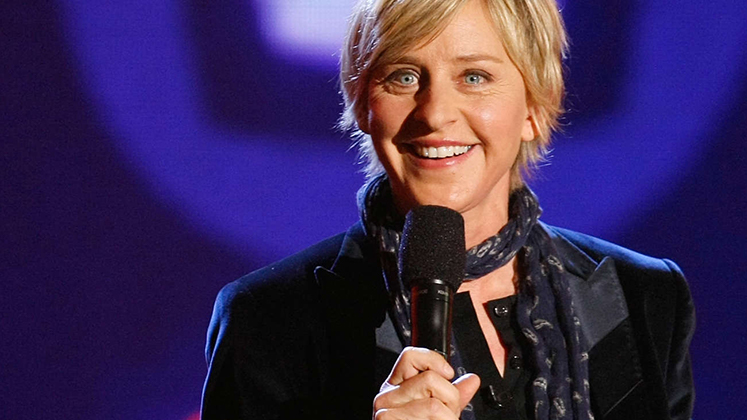 Her most famous line was a bit of witty whimsy about exercise and her grandmother: “My grandmother started walking five miles a day when she was 60. She’s 97 today. We don’t know where the hell she is.”

Audiences seemed to know who Ellen was: just another working comic, a slender, rather mousy girl in a mannish blouse and slacks who had a slightly tilted sense of humor and a nervously self-deprecating Bob Newhart-type delivery.

When networks began to raid stand-up clubs in search of sitcom talent like Jerry Seinfeld and Paul Reiser, they decided that Ellen had that same kind of genial appeal. Ellen seemed alot like Jerry and Paul ? smart, genial, friendly and pleasant. They didn’t realize that like Jerry and Paul, she had an eye for the ladies.

Obviously, the bio on Degeneris at the time was very simple. She’d made her debut in a local New Orleans coffee house in 1981 and spent nearly a decade polishing her disarming manner. She’d appeared in the brief run of the 1989 TV series “Open House” and the 1992 program “Laurie Hill.” Nothing suggested that there was any controversy in her life or any secrets in her closet.

Ala Newhart, the network gave the lowkety comic a suitably modest setting (book store) and surrounded her with mildly odd friends and co-workers. The hope was for a decent, Newhart-type success, a Top 20 or Top 40 show.

Indeed, Ellen’s winsome personality, and her habit of acting shyly confused and flustered (while uttering surprisingly sharp barbs) won her a good-sized following. She even hosted the Gramy Awards in 1996. She wrote a book, the title an example of her cute if windy style: “My point…and I do have one.”

But the more popular she became, the more fans and reporters wanted to know about her. Soon the rumors of her lesbianism became a rising chorus: “When is Ellen and her TV character Ellen Morgan going to come completely out of the closet?”

Some conservative TV stations and groups around the country were aghast. Still, Ellen decided to be true to herself and her comedy, and the nation watched the climactic episode when she comically revealed her love for another woman (via an inadvertent P.A. announcement at an airport).

Not long after, Ellen announced her love for actress Anne Heche, a disasterous move professionally for both of them. Heche had been considered a sexy leading lady in movies—but not after it became known that she didn’t care about her leading man.

The rising controversy coincided with the downward spiral of Ellen’s sitcom. The show had exhausted a lot of situations for comedy and after the famous “outing,” audiences grew tired of episodes that deliberatey played on the lesbian angle.

Ellen’s own sense of humor about the lesbian controversy began to erode the more she had to defend herself. She was given to sarcastic jabs: “I was raised around heterosexuals, as all heterosexuals are, that’s where us gay people come from… you heterosexuals.”

The fact was that Ellen’s comic persona had simply grown tiresome as well. 90’s audiences had become slick and hip, no longer finding a kindred spirit in the stuttery, awkward girl with the fake comic humility. The style of comedy had failed the most successful practicitioner at it; Bob Newhart. Newhart’s latest sitcom, “George and Leo,” had disappeared very quickly.

Ellen’s sitcom ended, and she vowed to leave show business for a while and concentrate on her domestic life with Anne Heche.