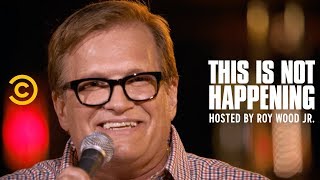 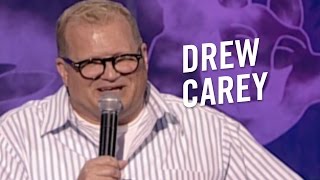 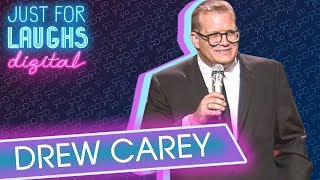 He likes a beer. He likes strippers. He copes with a blue collar job. Drew Carey managed to strike a nerve and also the funny bone in a lot of middle-Americans.

With his glasses and crewcut, his bulky build and his off-the-rack outfits that barely fit, Carey seemed like the average hapless goof. As a young stand-up, he moved from his native Cleveland to headline across the country. Audiences were sympathetic to his plight—and to his hopes to at least have the luck to land a cool brewski and a hot body.

The Doughboy (as his fans affectionately call him) appeared on “Star Search” in 1988 and holds the distinction of being one of the last stand-up comics to make his debut on “The Tonight Show” with Johnny Carson and be called over to sit on the couch to chat with him. That was in November of 1991. That year he made one of his first sitcom appearances via an episode of “The Torkelsons.”

Carey performed on HBO’s “14th Annual Young Comedians Show,” and over the next few years he starred in two of his own comedy specials for Showtime, “Full Frontal Comedy” and “Drew Carey, Human Cartoon.” For the latter he won a CableACE Award.

Soon sitcom producers began trying to find a way to bring his cartoonish presence to weekly television. A 1994 series “The Good Life” didn’t last. But the next time was the charm.

“The Drew Carey Show” proved to be an inspired mix of everyday workplace comic aggravation and strange, edgy flights of fancy (which ranged from having a transvestite brother on the program to fantasy segments involving songs).

He guested on other shows as well, turning up as a wacky scientist in a 1995 episode of “The George Carlin Show” and guesting in a 1996 episode of “Lois and Clark: The New Adventures of Superman.”

His squinty, pudgy presence continues to be a sight gag in itself. In fact, Drew made a guest appearance on Weird Al Yankovic’s show in 1997 playing Al—after disastrous plastic surgery.

In his first season, Carey was awarded the People’s Choice Award for Best Actor in a New Series. He hosted the 1996 CableACE Awards Special and HBO’s “Mr. Vegas All-Night Party.” Carey’s first book, Dirty Jokes and Beer, was released in 1997 and quickly became a best seller on the New York Times list. Carey hosted the 25th Annual American Music Awards in 1999 and became one of the few comedians to juggle two prime time series at once, adding “Whose Line Is It Anyway?” to his weekly chores. An improv TV show host, sitcom star, and roving stand-up comic…Drew Carey is a triple threat. But fans get the idea he’d rather be off somewhere with hookers and beer—and they’re happily in agreement with Drew himself. He’s become the personifcation of the unlikely working stiff living a dream come true.