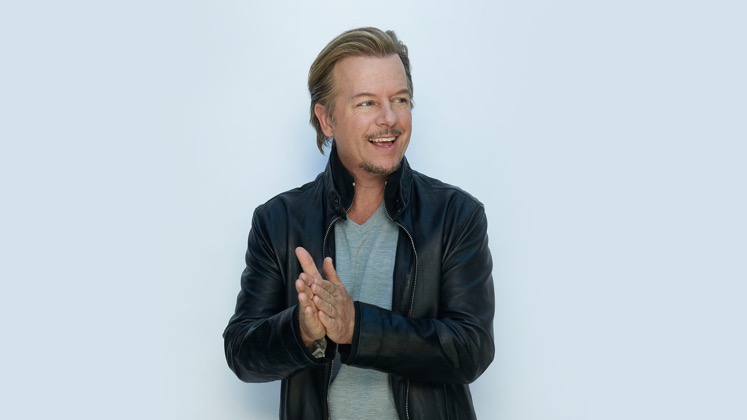 David Spade was born the youngest of three sons, was born in Birmingham, Michigan to Judith M. and Wayne M. Spade. His father moved the family to Scottsdale, Arizona, but abandoned them not long afterwards. His brothers are Bryan Spade and Andy Spade; Andy Spade is the husband of famed designer Kate Spade and CEO of Kate Spade New York.

David Spade graduated from Saguaro High School in 1982. He then went on to Arizona State University, where he earned a degree in business in 1986. He was a member of the Sigma Alpha Epsilon fraternity. ASU has had a long-running sketch comedy show, Farce Side Comedy Hour, from 1985 to present. Spade performed standup for the show on numerous occasions.

Spade, encouraged by friends to follow a career in comedy, pursued stand-up not long after college. His stepfather’s suicide, followed closely by his best friend’s death in a motorcycle crash, propelled him into comedy full time.

With the help of friend and fellow comedian Dennis Miller, he joined Saturday Night Live in 1990 as a regular cast member and writer. Here he made popular his well-known sarcastic, smart aleck character in a number of sketches, some of which include: a flight attendant who bids an unpleasant “Buh-Bye” to each passenger as they disembark; a receptionist for Dick Clark who, as a matter of policy, asks even the most recognizable face “And you are?”; and, most famously, the bitingly sarcastic Hollywood Minute reporter who assaults celebrities with a series of one-liners. According to interviews with Spade, most of the material that he wrote early on was given to Dana Carvey to perform on the show. Due to his relatively low work rate, he was in danger of being fired as a performer, until the Hollywood Minute segment secured his position.

Though most of the cast left in 1995, Spade stayed on the following year to help in the transition with the new cast. He then quit in 1996, citing “burnout” as the reason. Said Spade, “When I leave, it will be to ease the pressure, not to be a movie star. You can’t stay there forever—it kills you inside. It ages you in dog years. It’s a tough place.” He returned to host an episode in 1998 and another in 2005.

Although he received several offers to star in his own TV shows, he turned them down and joined the ensemble cast of Steven Levitan’s office sitcom Just Shoot Me!, which ran for seven seasons from 1997 to 2003. He played to type as a sarcastic receptionist Dennis Finch, which earned him several Emmy and Golden Globe nominations.

He was recently the host of a new Comedy Central show, The Showbiz Show with David Spade, which began in September 2005. On the show, Spade makes fun of Hollywood and celebrities in a manner similar to his old “Hollywood Minute” segment on SNL.