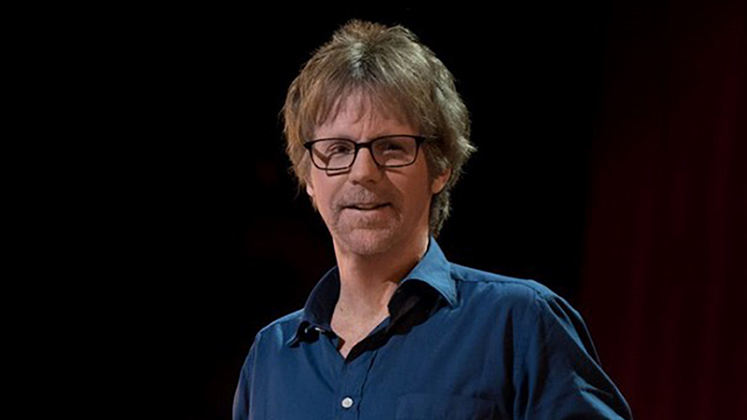 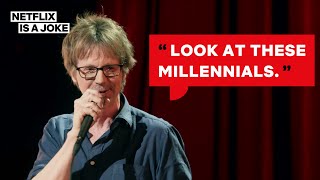 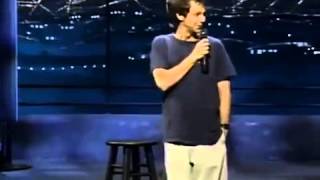 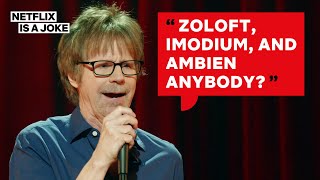 Dana Carvey Is Eavesdropping At The Pharmacy | Netflix Is A Joke

An impressionist/actor, Dana Carvey became one of the more versatile members on “Saturday Night Live” in the late 1980’s, perfecting both mimcry of personalities and his own characters. He seemed to specialize in know-it-alls. From real people like the loud Robin Leach and the lecturing George Bush to his own creations the loud bodybuilder Hans and the lecturing “Church Lady,” Dana carved out a gallery of self-important people.

He admitted, “That’s what the real fun of playing these characters is. It’s making fun of those people who really feel they have the truth and the answers for everybody. Self-righteous, arrogant, “I’m superior to you” people drive me nuts.” Carvey even did an imitation of “Saturday Night Live” co-star Dennis Miller. Another favorite was Andy Rooney, spouting “Ya ever wonder why people’s faces are made of flesh? Why can’t people’s faces be made of Play-Doh? That way, if someone said something that annoyed you, you could just reach out, and, well, mess up their face a little…”

Born in Missoula, Montana, Carvey grew up in San Carlos, California, and began performing stand-up in San Francisco in 1978. He found some acting work as well, taking small parts in films (a waiter in “This is Spinal Tap”) and the role of Mickey Rooney’s grandson in “One of the Boys.” A sitcom pilot, “Whacked Out” co-starring Desi Arnaz Jr. never made it to series even with Lucille Ball urging the audience to laugh. Carvey got married in 1983, and a few years later won recognition for playing the likable probation officer in “Tough Guys” with Kirk Douglas and Burt Lancaster.

On “Saturday Night Live” Carvey was able to use his mild personality to underline his satire. Jay Leno enthused, “He’s got a real pie-in-the-face AM sense of humor and a sophisticated FM routine for people who appreciate their comedy when it’s more subtle.” His two most popular routines, as George Bush and as The Church Lady, were both broad and quietly satiric at the same time. Through the gags, Carvey’s gestures and expressions captured the characters’ underlying tensions. He gave Bush a lot of restless hand movements and the catch-phrase “it wouldn’t be prudent.” He explained that he arrived at Bush by performing “a cross between Mister Rogers and John Wayne’s cadence.”

The Church Lady, with her tensely twisted half-smile and feverish sense of etiquette and propriety was based on someone Carvey and his Lutheran family met in church: “I remember when my family would be late to church, we’d be kind of embarrassed, and we’d have to say, ‘Hey, we had a barbecue, lighten up!’ And those church ladies would go, “Oh, I see, we come to church when it’s conveeeenient!”

As the moderator of a TV talk show called “Church Chat,” The Church Lady (rarely called by her name, Enid Strict), interviewed guests with tongue-in-cheek sarcasm and cold friendliness. To one sexy actress, she huffed, “We like ourselves, don’t we? Yes, especially with our bosoms pressed together and offered for the explicit viewing of the chestal area. Who dressed you this morning, Sally? Could it be—Satan?” When Rob Lowe appeared as a guest, fresh from a scandal involving pornographic video tapes he made with an adoring fan, The Church Lady took him over her knee as the crowd laughed and applauded. “Get out of his buttocks, Satan!” she shouted.

Her catch phrase was the artificially pleasant and drily mocking, “Isn’t that special?” It made Carvey the most “special” member of the new “Saturday Night Live” cast.